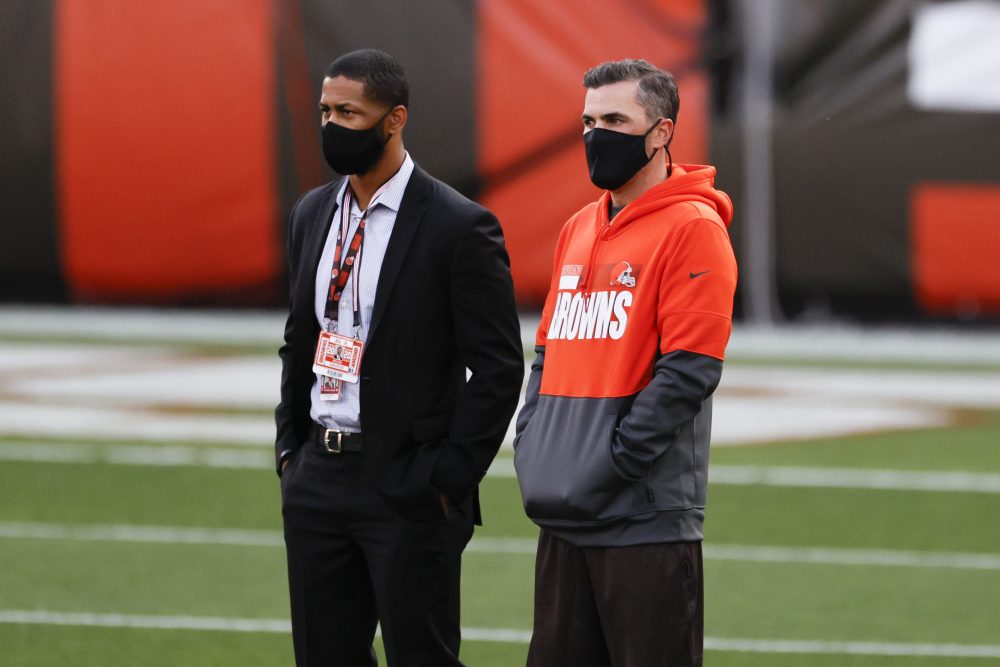 Safety John Johnson III was special in the eyes of general manager Andrew Berry. Not only did he fit at a position the Browns greatly value, Berry considered him the type of talent that “doesn’t usually make it to the free agent market.”

Johnson was the top target for Berry when free agency started last week, and he agreed to a three-year, $33.75 million deal within hours of the negotiating period opening. Berry didn’t slow down after landing Johnson, adding three more free agents and re-signing several, but the Browns changed the approach to being “opportunistic buyers.”

“That’s something we were really able to accomplish with the guys we added,” Berry said Thursday in a news release.

But first Berry made sure he spent big on Johnson.

“We were in a position where we had enough flexibility from a cap perspective where if we felt there was a player who aligned with our needs, if their skill set matched what we want to do within our scheme and they fit the profile of smart, tough, accountable, young, durable, then we can go aggressively and attack that player,” Berry said. “We were able to do that with John Johnson III.”

Johnson, 25, was a captain and the signal caller in 2020 for the Rams’ No. 1-ranked defense and pass defense. He led the Rams with 105 tackles, adding an interception and eight passes defensed.

“We thought he was one of the more versatile safeties in the NFL,” Berry said. “He can play free safety, strong safety and he can play in the box in the nickel or dime. His breadth of skills that he brings to the table — that he can play man coverage, he can play center field, he can support the run and really do everything at a pretty high level — it’s perfect for what we want to be as a defense.”

Browns interested in Jadeveon Clowney again, host him on visit

Hill, 29, spent the last four years with Johnson in the Rams secondary. The Browns also love his versatility.

After spending much of his career playing outside cornerback, Hill played primarily in the slot in 2020, starting all 16 games and setting a career high with 77 tackles. He intercepted three passes, recovered a fumble and led the league with three defensive touchdowns.

“He’s a smart football player who can play man coverage, zone coverage, turn the ball over and is a sound tackler,” Berry said. “We all viewed him as a really big part of the defensive success in Los Angeles this past year, and for us, the ability to have a corner that can play at a high level on both the outside and inside gives us a lot of flexibility with who we currently have on the roster and who we may add moving forward.”

Coach Kevin Stefanski was impressed by how well Johnson played at nickelback.

“He’s competitive as all get out in coverage, he can run fit, he can blitz and he can play outside,” Stefanski said on the team’s in-house radio show.

“We view Takk as a young edge player with a very high motor,” Berry said. “He’s got speed, he has power and he has quickness. He really plays with his hair on fire.

“We think his playing style and skill set marries really nicely with what we look for out of our defensive ends in this system, and he’s a guy we think really has a ton of upside.”

Walker will take over as middle linebacker for B.J. Goodson, who’s a free agent. Walker was a full-time starter for the Colts the last three years.

“The name of Anthony’s game is really speed and instincts,” Berry said. “He is one of the fastest linebackers in the league. He’s a very quick processor and is very smart. We think he’s a guy whose range and tenacity fits really well with how we view the modern-day linebacker. We also think that he’s a good cover guy, specifically with his ability to match running backs out of the backfield.”

Another key to the last couple of weeks was bringing back a handful of their free agents after they hit the market. Receiver Rashard Higgins, linebacker Malcolm Smith, kicker Cody Parkey, receiver/returner JoJo Natson and linebacker/special teamer Elijah Lee were retained on one-year deals.

“We’re all very thrilled to get guys like that back because it doesn’t always work out that way,” Berry said. “Those guys played a major role for us last year, and we look forward to the role they’ll play for us in 2021.”

Ryan Switzer’s son being transferred to Boston hospital
Rashard Higgins on return: I knew where I wanted to be, all the pieces to the puzzle are in place