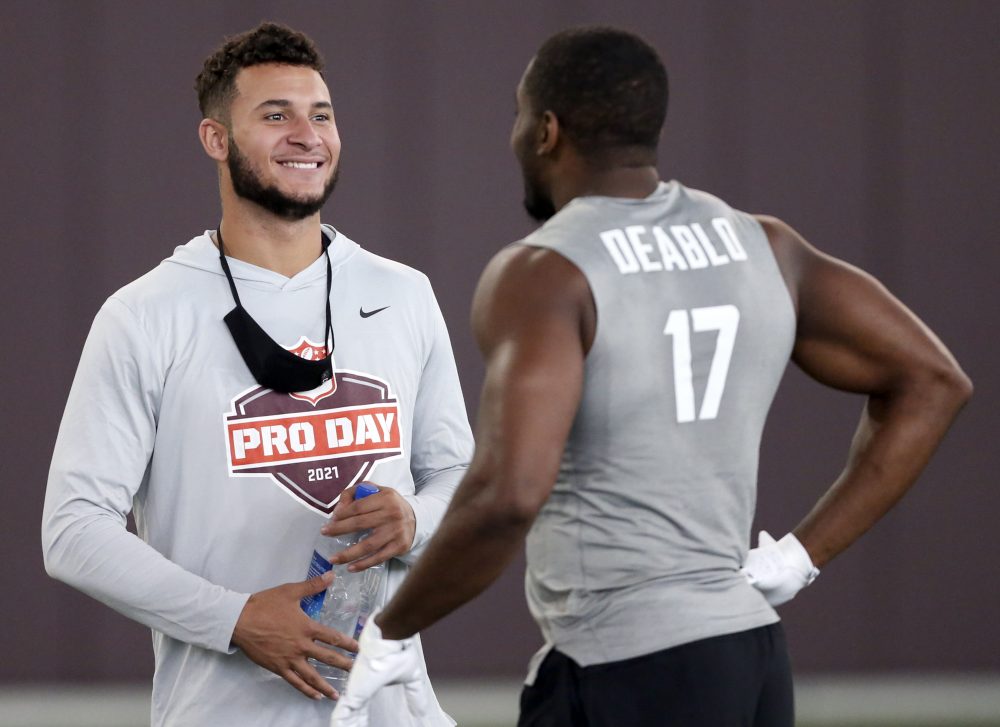 The evaluation of Caleb Farley is complex.

The Virginia Tech cornerback is one of the NFL Draft’s most impressive athletes, standing 6-foot-2 and 197 pounds and possessing 4.3 speed. He has the confidence to match, saying he’ll be disappointed if he doesn’t become one of the great corners in recent NFL history.

The combination of obvious talent and untapped potential prompted NFL Network analyst Daniel Jeremiah to rank Farley the fifth prospect in the draft. And he plays a position with incredible value to NFL teams.

Now for the complications.

Farley was a quarterback in high school and had never played defense before arriving in Blacksburg. He played only 24 games at cornerback, missing time with knee and back injuries and opting out of the 2020 season due to COVID-19 concerns. And he couldn’t participate in Virginia Tech’s pro day after a second minor back surgery in two years.

He seemingly could go anywhere from the top 10 to the bottom of the first round, where the Browns sit at No. 26 looking for a cornerback as they continue to overhaul the defense.

“When the teams look at the imaging and get the real information I don’t think it will be an issue,” Farley said of his back last month at the pro day. “I accepted my draft invite, so I’ll be in Cleveland. If a team wants the best corner in the draft, they’ll come find me.”

In order for the Browns to have a chance at Farley, other cornerback-needy teams would have to pass, most likely because of his back. It is the teams’ first concern that must be addressed.

The Browns, who have met virtually with Farley, are in an interesting position when it comes to taking a chance. They’ve got a strong roster, suggesting they could afford to gamble. But safety Grant Delpit (ruptured Achilles tendon) and cornerback Greedy Williams (nerve injury in a shoulder) are coming back after missing all of last season, so the tolerance for injury risk may be reduced.

Mailbag: If the Browns trade up, will it be for a defensive end or a cornerback?

Farley, 22, addressed representatives from NFL teams at the pro day in an attempt to calm their fears. He explained to reporters he herniated the L5 disk and bulged the S1 in 2019 doing a dead lift. He didn’t play the last two games, had a discectomy on the L5 which solved that problem, but had lingering sciatica symptoms with the S1. He irritated it in February, which affected his training.

After consultation, he decided to have a discectomy on S1 in order to be ready for training camp.

“I got a great report from Dr. Watkins about the season,” Farley said. “Really, the only negative about the situation is not being able to go put up the numbers that I was supposed to (at pro day). I’m just thankful to still be in this position to showcase my talent at the next level and whatever team grabs me is going to have the best corner in the draft.”

That was a theme with Farley, who believes he stands out in a stacked corner class. Alabama’s Patrick Surtain II, South Carolina’s Jaycee Horn and Northwestern’s Greg Newsome II are also considered first-round talents and possibilities for the Browns depending on how long they’re available and if the Browns consider trading up.

Confidence is required at corner, and Farley’s stands out. He told NFL.com he would feel like he “wasted” his talent if he doesn’t become “one of the best corners to play the game in a long time.”

The belief comes from his body.

“I know what an athlete looks like. I know what guys with different abilities look like,” he said. “I say this in a humble position, but I know I possess a very elite ability in my athleticism, in my quickness, with long-term speed and my football IQ of the game. That’s one of the reasons you’ve seen me excel at the position so fast, never having played it before.

“I just know where I’m going to get to and even how much better I’ve gotten even from the 2019 season. Just training and knowledge and wisdom, I truly believe in myself. At this point in my life and my maturity in my mind, I don’t really need any more pats on the back or need anybody else to tell me I can do something. I understand the game of football and what comes with it and I know I’m special.”

He has highlights and statistics to support his case.

In the 2018 opener, after missing the 2017 season with a torn anterior cruciate ligament, he had two interceptions vs. Florida State in his first game playing corner. He finished his career with six interceptions, a touchdown, 25 passes defensed and was first-team All-Atlantic Coast Conference in 2019.

“He’s got so many physical skills and capabilities that it was an easy transition for him,” former longtime Hokies defensive coordinator Bud Foster told The Chronicle-Telegram in a phone interview this week. “I think it says a couple things about him. No. 1, it says something about his mentality. No. 2, it says something about his competitiveness. And No. 3, it just shows a willingness to be a sponge, to learn, to grow, to push himself to develop a great work ethic, to develop the skill set it takes to play at that level.

“He’s a 600-horse engine that needed to be fine-tuned. But just, my gosh, what a tremendous upside.”

NFL scouts find that potential intoxicating. Enough to ignore the lack of a predraft workout — the scouting combine was canceled due to the pandemic.

“He doesn’t have to run a 40 for people to know that he’s fast,” Virginia Tech coach Justin Fuente said at the pro day. “And you just watched him in really a year’s time just skyrocket in terms of production.

“His ceiling is so high. I think that along with his physical tools is what fascinates people.”

Fuente said he hadn’t gotten the sense NFL teams were hesitant because Farley opted out of last season, the first big-time player to do so. His mom had died after a long battle with cancer and he didn’t want to jeopardize his dad. Plus there were questions whether there’d be a season and what it would look like.

“He handled that probably better than I would’ve handled that,” Foster said of the death of Farley’s mom in January 2018. “I saw a guy that showed a lot of resiliency and grit. He’s a great kid.”
Farley strives for greatness. He wants the responsibility of matching up with the opponent’s top receiver every week and mentioned Richard Sherman, Marcus Peters, Stephon Gilmore and Tre’Davious White as NFL corners he likes to watch.

“I’m a fan of every guy that has come before me and I try to implement everything they do into my own game and just build the perfect prototypical corner that you can make in the lab,” Farley said. “I feel like that’s going to be in a few years, so I’m just ready to get back out there and continue to prove to the world what I can do on the field.”

Cornerback is the first position to watch for the Browns in the early rounds of the NFL Draft.
They have a significant need at the position, and the quality prospects are plentiful. If the Browns don’t grab one at No. 26, it would be a shock if they didn’t take one in the second round at No. 59.
Denzel Ward is locked in as the No. 1 corner and Troy Hill was signed in free agency to be the nickelback. Greedy Williams, the No. 46 pick in 2019, is penciled in as the second starter on the outside, but he missed all of 2020 with a nerve injury in his shoulder. He’s optimistic about returning this season, but the Browns need a strong Plan B. They would also benefit from competition after Williams was underwhelming as a rookie.
Quality depth is critical at this premium position, so the Browns can’t afford to stand pat. They also need volume, so a second corner selected later in the draft is a possibility.

** Patrick Surtain II, Alabama: His dad was an NFL All-Pro and his high school coach. He’s got great size at 6-foot-2, 202 pounds.

** Caleb Farley, Virginia Tech: Made the transition from offense in college and opted out of the 2020 season but has elite potential.

** Keep an eye on for the Browns: Farley; Newsome; Tyson Campbell, Georgia