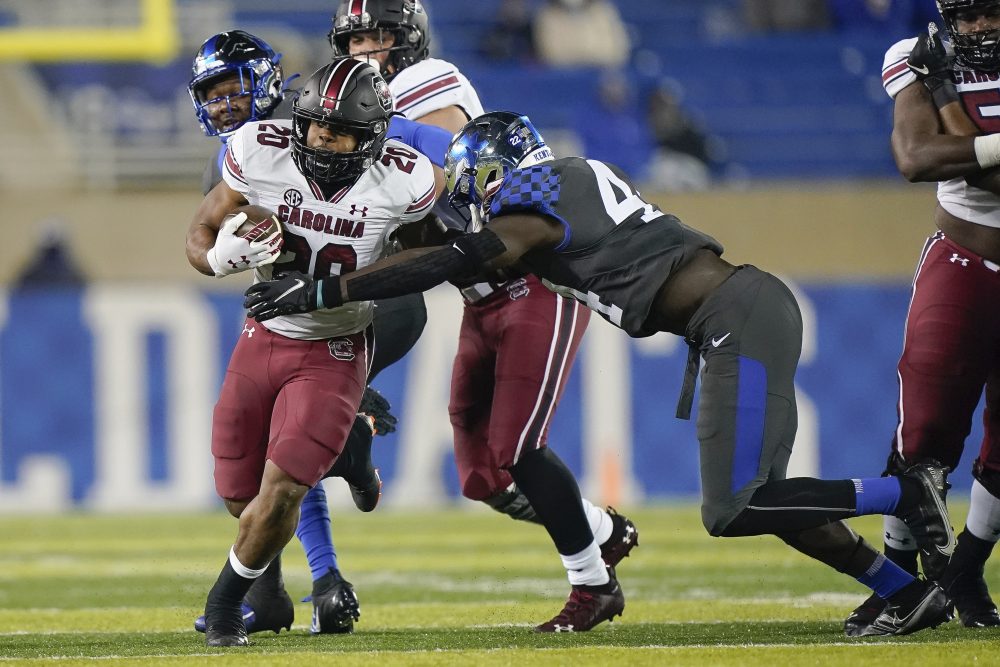 Linebacker Jamin Davis didn’t look like a first-round pick when he arrived at the University of Kentucky weighing about 190 pounds.

“Give or take a couple biscuits,” coach Mark Stoops said.

The perception hadn’t changed after two seasons of coming off the bench and totaling 42 tackles. Even after a breakthrough redshirt junior season in 2020, when he led the Wildcats with 102 tackles in 10 games, adding three interceptions and 1.5 sacks, he told The Athletic the NFL advisory committee gave him a fourth- or fifth-round grade.


But with the draft a little more than two weeks away, Davis (6-foot-3 ½, 234 pounds) seems destined to be taken with one of the first 32 picks announced by Commissioner Roger Goodell from the stage in front of Lake Erie.

“Honestly I’m guessing people just starting to wake up just a little bit,” Davis said recently at Kentucky’s pro day. “I honestly couldn’t tell you, I couldn’t put my finger on it. I’m not doing anything special, I’m not pulling out any hat tricks or anything, I’m just being myself and I guess everything is just unfolding right before my eyes.”

The meteoric rise is a combination of two factors: good film from the fall and great athleticism. After adding 45 pounds of muscle during his time with the Wildcats, Davis wowed at the pro day workout. He ran a sub-4.5-second 40-yard dash (unofficial times were as low as 4.37), vertical jumped 42 inches and broad jumped 11 feet.

“We expected really impressive numbers. Those maybe took it to just another notch,” Kentucky defensive coordinator Brad White told The Chronicle-Telegram last week. “I was expecting high 30s in the jump, 42 was rare. You start breaking 4.5 as a linebacker, it’s crazy at that point.

“He rises up in big moments.”

Davis, 22, has met virtually with the Browns, who own the No. 26 pick. They don’t necessarily need a linebacker and may not value the position enough to spend a first-round pick, but they covet speed there and don’t have a marquee player at the second level of the defense.

NFL Network’s Daniel Jeremiah had the Browns selecting Davis in his latest mock draft. He’s become a big fan and named Davis as a candidate to be rookie of the year, comparing him to Colts two-time All-Pro Darius Leonard, who was NFL Defensive Rookie of the Year in 2018.

“He’s just got some wow plays with his range, with his ability in pass coverage,” Jeremiah said on a conference call in March. “He’s quick to trigger. He’s got really good eyes.

“I didn’t honestly know who he was during the fall. Nobody had said anything to me about him, and then you’re kind of going through and watching on tape and this guy just jumps off the screen.”

Kentucky LB Jamin Davis says he heard from the NFL advisory committee that he was a “fourth or fifth round” draft grade.

Over the course of the 2020-21 season, and after a dazzling Pro Day, his draft stock has skyrocketed.

The concern is Davis has had just one year of production and seemingly came out of nowhere. He only started last season because Chris Oats had a stroke, leaving an opening at middle linebacker.

But Davis’ coaches at Kentucky say he’d been trending in the right direction and the recent love he’s receiving isn’t a total surprise. He impressed in the spring of 2019 but injured a hamstring in the summer and wasn’t himself at the start of the season before coming on strong at the end.

Last season was viewed as the next step — or several steps — in his growth.

“Your film doesn’t lie. Jamin deserves the credit,” Stoops said. “This isn’t some overnight sensation. Jamin has been working his tail off since the moment he walked in our door.

“Nobody was saying he was some amazing football player or amazing athlete or first-round pick. But he’s done a lot of work for a lot of years to put himself in this position.”

Davis doesn’t come across as simply a workout warrior. His speed and explosiveness translate to the field, with an 85-yard interception return for a touchdown against Tennessee the most obvious example.

“If you turn on the film and you watch him run sideline to sideline, I don’t think there’s any question that that’s a guy playing at a different speed than most guys on the field,” White said.

White’s even more impressed with how Davis pins ball carriers to the ground, calling it the best thing he does. White cites numerous examples of third-down stops that forced punts because Davis prevented yards after contact.

“His 6-inch finish is as good as anybody we had on our roster and I would put up against anybody in the country,” White said. “Whether it’s a 6-inch strike on a lineman, whether that’s 6-inch finish when you’re striking a ball carrier.

“A lot of that’s God-given ability. Special, rare athletes have that ability. They can just come out of their hips at the moment of contact at a rate of speed with such power and violence that they’re going to win at the point of collision.”

Davis’ skill set should allow him to excel in the middle or outside. White believes he’d benefit from position stability early so he can learn the system, saying the breakthrough came after he became completely comfortable in Kentucky’s scheme.

“Early in his career, thinking through all the things we do on defense didn’t allow him to play at the speed that everybody’s seen in his pro day and on film,” White said.

Davis was better in zone coverage, which Kentucky used a lot, than man-to-man but has the speed to run with tight ends and running backs and should improve. That’s a pattern with him.

“He’s as good a practice player as I’ve been around,” White said. “He treats every drill, every practice, every rep like it’s fourth-and-1. Everything’s important to him.

“He’s an unbelievable teammate, he’s a hard worker, his best football’s ahead of him and he’s all about ball. He’s a coach’s dream.”

While Davis could be one of the darlings of the draft, he won’t be center stage in Cleveland.

“It was always a dream of mine if I got in this position one day to just be at home with my mom, my dad, my brother and sister,” he said. “I never really wanted to be a guy that was all dressed up in a fancy suit walking across a stage.”

His parents were in the military and he grew up in southeast Georgia. He’s a die-hard NASCAR fan and is considering becoming a criminal lawyer when he’s done playing.

All the sudden attention hasn’t gone to his head.

“Honestly I haven’t even really had a chance to sit down and process everything that’s happened, for real,” he said. “The way everything just unfolded honestly I’m just doing my business, stay grounded and just continue being who I am as a player, as a person and honestly hopefully I end up on somebody’s team.”

He will. And it’s likely to happen early.

The Browns could go the whole draft, which will begin with them having nine picks, without selecting a linebacker. The position is also a dark horse to be the pick at No. 26. Such is the volatility of the draft.

The Browns addressed linebacker in free agency, signing Anthony Walker to play in the middle and re-signing Malcolm Smith for the nickel package. They also have youngsters in Jacob Phillips, Sione Takitaki and Mack Wilson.

But it’s fair to wonder if they have a cornerstone for the second level of the defense. That could be resolved by passing on cornerback and defensive end in the first round.

Selecting a linebacker early still seems unlikely, especially with coordinator Joe Woods’ plan to use a third safety in place of a third linebacker in many situations.

But linebacker can’t be ruled out. The defense needs more help and playmakers, and there are a couple of intriguing candidates. If the Browns love one that’s on the board at No. 26, it wouldn’t be an absolute stunner to see general manager Andrew Berry swerve and take a linebacker.

Micah Parsons, Penn State: The complete package at 6-foot-3, 245 pounds with speed. He could be the first defender taken in a draft top-heavy on offense.

Jamin Davis, Kentucky: He’s got receiver speed, hits with power and has loads of potential.

Zaven Collins, Tulsa: At 6-4, 260, some teams might consider him too big for the position. But he plays fast and is determined to play off the ball.

Keep an eye on for the Browns: Davis; Owusu-Koramoah; Monty Rice, Georgia