Mailbag: How much is too much to pay Jadeveon Clowney? What position to target at No. 26? Where’s the interest in Melvin Ingram? 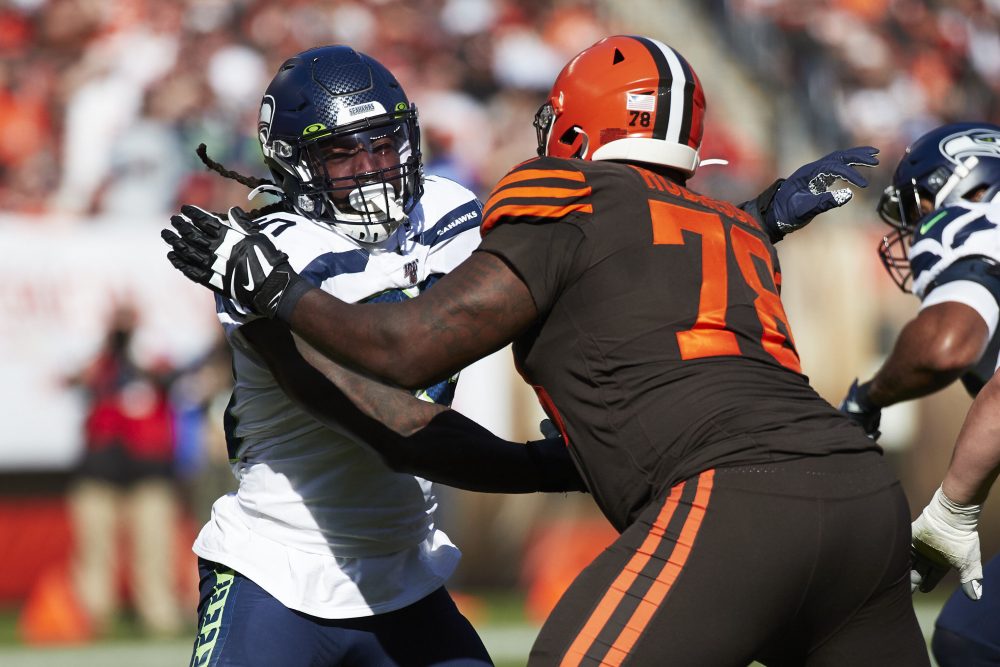 Q: Scott, what is the max contract offer/general range you’d be comfortable with if you were general manager Andrew Berry working on the Jadeveon Clowney deal?

A: My original thought was $6 million for one season would be the perfect price point. But that’s not realistic. Carlos Dunlap re-signed with Seattle for two years and $13.6 million, including $8.5 million guaranteed, and Clowney made $13 million last year with the Titans. So I’d expect a deal with the Browns to come in around $8 million for one season. I’d be surprised if the Browns gave Clowney a second year, unless they could get out of it cheaply.

To answer your question, if I were Berry, I could live with $8 million. He likes Clowney more than I do — I think he’s solid — but I’d draw the line at $9.5 million. It’s arbitrary and maybe shouldn’t matter, but I wouldn’t be comfortable paying him $10 million.

I find the money topic interesting in comparison to the Nos. 2 and 3 ends from 2020. Olivier Vernon was paid $11 million and Adrian Clayborn $2.75 million. Takk McKinley signed a one-year, $4.25 million deal for 2021, so given the reduction in salary cap, paying Clowney $8.5 million would be a wash financially and potentially an upgrade talent-wise.

Q:
Once again you are GM Petrak. Your Browns are on the clock with Pick 26. You have your choice of a DE, LB or DB. All 3 rate about the same … who are you taking and why???

A: For me, the position is easy, especially if the Browns sign Clowney as I expect. I wouldn’t feel comfortable going into training camp with Greedy Williams as my only real option at No. 2 cornerback. He missed all of last year with a tricky nerve injury in his shoulder, so I think it’s imperative the Browns draft someone they feel can at least compete with Williams for the starting role. Depth is too important and the position too critical not to have a strong Plan B.

I don’t expect Alabama’s Patrick Surtain II or South Carolina’s Jaycee Horn to be available, so Greg Newsome II out of Northwestern would be my choice if he’s on the board. If he’s not, I would think long and hard about Virginia Tech’s Caleb Farley. He might be the best athlete of the bunch but had two “minor” back surgeries in the last two years. I’d gamble.

Defensive end would be my next choice, regardless if Clowney signs. He would likely join McKinley on one-year contracts, so a draft pick could be groomed to be Myles Garrett’s long-term bookend. I just think cornerback and end are more important than linebacker, where the Browns have bodies if not a stud.

Q: Why haven’t the Browns seriously considered Melvin Ingram at EDGE? He is also highly regarded by PFF.

A: I’ve wondered the same thing. I’ve always been a fan of Ingram because he’s disruptive as a pass rusher.

I surmise there are a few reasons the Browns would prefer Clowney. He’s 6-foot-5, 247 pounds, which is 3 inches and 8 pounds heavier than Ingram and could translate to a better performance defending the run. PFF graded Ingram 53.8 against the run in 2020, compared to 76.3 as a pass rusher. Clowney graded 69.9 and 69.6. Ingram is also turning 32 this month and is nearly four years older than Clowney.

Ingram, like Clowney, had his 2020 season cut short by a knee injury. But he’s been productive and would be worth a look if the Clowney pursuit falls short.

Q: With the current roster, before another edge is possibly added, would you rather double dip on edge or defensive tackle in the draft? With three tackles on the last year of their deals I was thinking double up on tackle and add the best available edge. Thoughts?
P.S. I also think a double dip will happen at corner.

A: First of all, I agree with the double dip at corner.

As for your D-line question, I would go edge rusher given the current roster. I value that spot more than tackle and believe quality depth is easier to find on the interior. I’m not trying to diminish the importance of a pass rush up the middle and being able to stop the run, but given a choice, I’d prioritize the edge.

Q: Do you believe the Browns are exploring a potential trade for Vikings defensive end Danielle Hunter, and if so what would it cost to acquire him?

I don’t think he was ever a real option for the Browns from a cost perspective. He’s due to make roughly $12 million a season for the next three years and wants a raise. I just don’t think the Browns want to spend that much on the No. 2 end. I feel comfortable saying that because they didn’t get in on the first wave of pass rushers signed in free agency.

The other pieces of a potential trade are the Vikings must be willing to part with Hunter and what it would take to get him. I would think the Browns would have to give up a second-round pick and a middle-round pick, then open the vault to restructure his contract. I just don’t see it, especially given the continued interest in Clowney.

Q: How are the Browns balancing winning now with some of the needs coming up next year or the year after? I’m thinking about the interior OL, WR and interior DL mostly, but other spots might be problematic as well with all of the 1-year deals.

A: I’m going with two of your questions this week because I really like this one, too.

I’m sure chief strategy officer Paul DePodesta and Berry are having these discussions every day. The best organizations find the proper balance, and the Browns aim to be included in that group. I would add DE to your list of positions and am curious to see how the Browns attack the draft with respect to the present and the future.

I believe the benefit of addressing the most obvious needs in free agency is that it frees the Browns to draft best player available. While that is a trite phrase, it speaks to your point. If the focus can be broader than 2021, picking the top talent on the board naturally creates a long-term plan, especially when the most important positions are targeted.

Perhaps I’m contradicting myself a bit, but I feel like a long-term plan is most necessary at defensive end. I like the idea of a youngster paired with Garrett for the next five years as opposed to cycling through veterans on one-year contracts. Receiver would be next. Although I’m in no hurry to dump Odell Beckham Jr. or Jarvis Landry, adding a promising rookie to the pile that includes Donovan Peoples-Jones makes sense. And I could certainly see midround picks spent on both interiors. Right guard Wyatt Teller and defensive tackle Sheldon Richardson are in the final year of their contracts.

Mailbag: If the Browns trade up, will it be for a defensive end or a cornerback?
Mailbag: Could Browns draft a safety in 1st round? What does release of Sheldon Richardson mean for draft plan? Can Richardson re-sign?