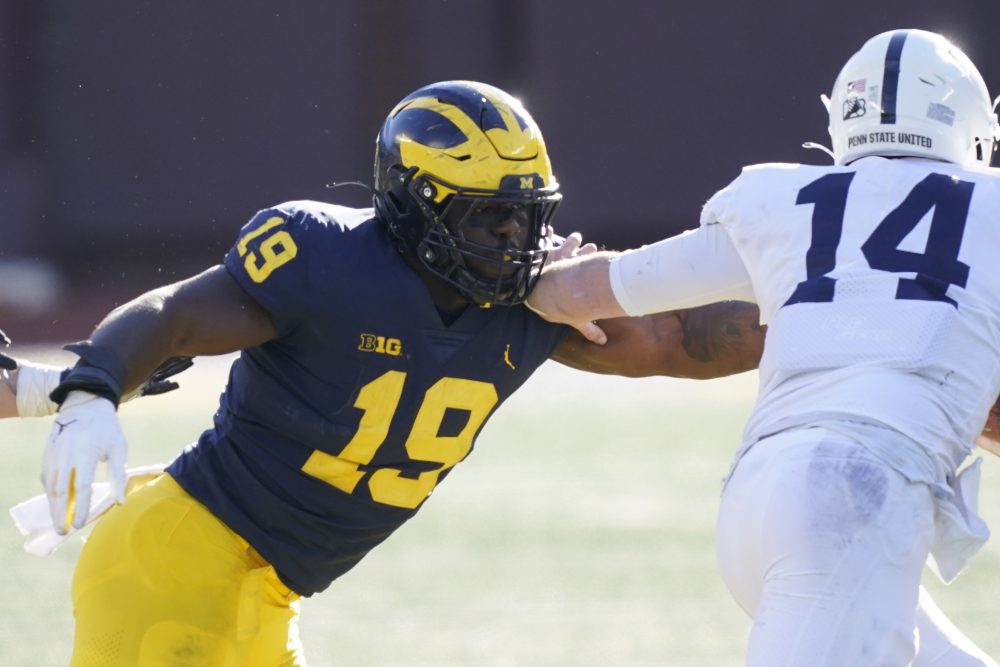 Kwity Paye smiled big, reached into a bag, grabbed the wallet he’s had since the sixth grade and held it up for all to see.

The old-school money holder stores something much more precious and has for its lifetime. A paper with inspirational quotes he refers to daily, and an index card listing people and things for which he’s grateful.

“‘Nothing worth having comes easy. Nothing will get in the way of me achieving my dreams. Work hard to take care of my family. God gives his toughest battles to his strongest soldiers. Remember when you wanted what you currently have,’” Paye read during his pro day Zoom.

The University of Michigan defensive end is projected to be picked in the first round of the NFL Draft on April 29. He reads the quotes he scribbled in the sixth grade “every day” with the realization “I’m accomplishing everything that I wanted to accomplish.”


“It’s unreal, but at the same time, I worked to get here,” Paye said.

“Those kind of keep me grounded and keep me humble and just remind me of where I came from,” he said. “Because especially now in life where I’m at there’s going to be a lot of people that are going to try to boost my head up and kind of make me forget who I am and where I come from, so those kind of keep me true to who I am.”

Before Paye’s suddenness, strength, motor and vast potential can be discussed — and the possibility of the Browns landing him as the long-term bookend to Myles Garrett — his unlikely journey to first-round pick must be appreciated. It wouldn’t have been possible without the harrowing odyssey of his mom, Agnes.

She escaped war-torn Liberia, walking miles barefoot through the forest, and then Sierra Lione before being able to leave Guinea and bring Paye and his brother to Rhode Island. She worked multiple jobs to support them and went to school, eventually sending Paye to a private high school to help him earn a college scholarship.

She gave him a chance in life and to make it to the NFL — and inspired the quote sheet.

Kwity Paye’s mother fled Liberia to give her family a better life.@UMichFootball DE @OfficialKwity wants to return the favor by fulfilling his @NFLDraft dreams. 💙

He’s in the mix to be the top pass rusher taken, but in a jumbled draft class could still be on the board when the Browns pick at No. 26, or close enough for them to trade up a few spots. After signing veteran ends Jadeveon Clowney and Takk McKinley to one-year contracts, the Browns don’t have to force a rookie into the lineup but could use a young option for the long term.

“I would watch Myles Garrett because we’re kind of similar in build,” said Paye, who added he’s talked with the Browns. “When I would look at NFL D-ends or edge guys, they’re usually 250, 240. They’re not like very heavy guys and I weigh 270. So Myles Garrett weighs 270, as well, and I kind of want to see how he uses his speed.

“He’s very athletic, as well. He’s a freak, so being able to watch him and seeing how he uses his weight to leverage O-tackles and certain moves that he uses carrying that weight kind of helps me.”

RI’s Kwity Paye with an impressive Pro Day at Michigan. He ran a 4.52 40-yard dash and 36 reps on the bench.@OfficialKwity @HendrickenHawks @NBC10 #NFLDraft
(Via NFL Network) pic.twitter.com/tgZDu1f8GC

Paye’s stats don’t generate awe, especially the 11.5 sacks. But draft analysts are almost universal in the opinion he’ll be better in the NFL than at Michigan, where he was often asked to play the run first and line up inside, rather than on the edge where he can use his athleticism.

“I think he’ll be more of a sack guy in the NFL turned loose,” ESPN’s Mel Kiper said Thursday of his top-rated end. “He’s got versatility, he’s a freakish talent, tremendous test numbers and the attitude, the approach is fierce. He hustles and he plays hard.”

Kiper said Paye could develop into a 10-sack-a-year guy in the NFL.

“Kwity Paye’s a fascinating guy, just the way he’s built,” NFL Films’ Greg Cosell said on the “Inside the Birds” podcast. “He’s dense and compact but he’s a plus athlete. He can change direction.

“He’s got heavy hands and you can’t teach that. He controls and displaces offensive tackles, he moves them. I think there’s a lot to unlock with this kid, athletically and physically.”

“At times, when I start thinking about it, my heart starts to beat faster because when I was in middle school I always dreamt like, ‘I hope I get the chance to go play in the NFL,’” he said.

He has it, and the opportunity to let his mom relax.

“It feels amazing just to be able to take care of her because that’s the thing I’ve wanted to do since I was young,” he said. “I just saw how hard she worked, how much she struggled to get us through. She’s just relaxing now and she’s just chilling.”

The offseason started with the premium position as the No. 1 priority. With free agents Jadeveon Clowney and Takk McKinley signed, the pressure is gone. The Browns can line up Week 1 and feel comfortable with their rotation.

That doesn’t remove defensive end as an option with the No. 26 pick. Clowney and McKinley signed one-year contracts, so the search for a long-term bookend for Myles Garrett continues. The Browns are scheduled to pick again at No. 59 in the second round, and a number of intriguing pass rushers should also be in play there.

A month ago, it seemed a certainty the Browns would use an early selection on an end. It’s been reduced to a possibility.

Kwity Paye, Michigan: Extremely active, strong against the run and should only get better as a pass rusher.

Azeez Ojulari, Georgia: Has great burst and can turn the corner. May be best suited at outside linebacker in a 3-4 scheme.

Jayson Oweh, Penn State: Didn’t have a sack in seven games in 2020 but was still second-team All-Big Ten. Has big-time potential.