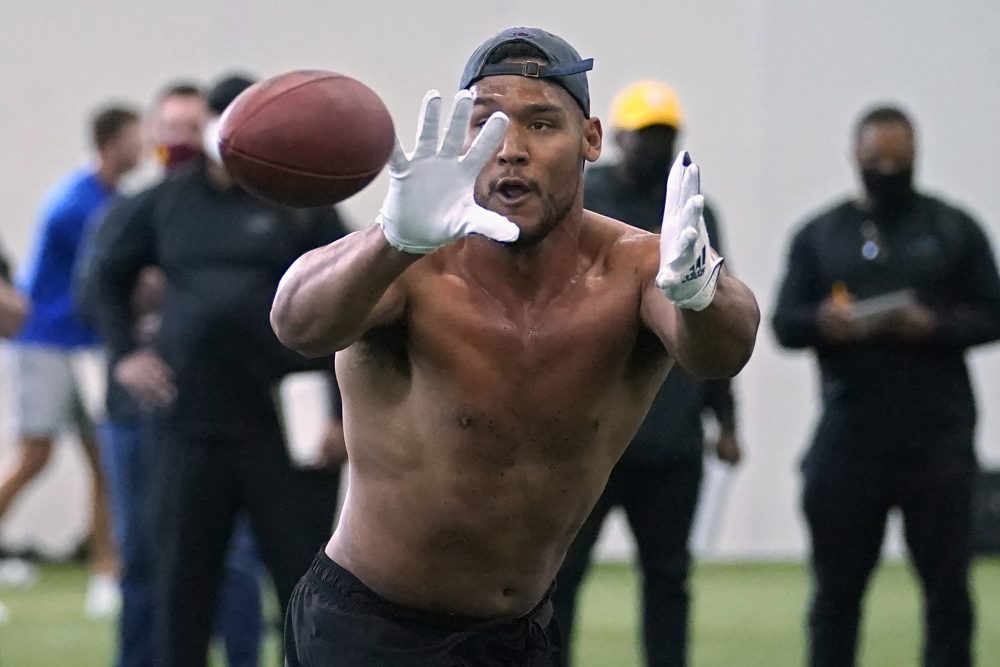 Zaven Collins was raised in Hominy, Okla., a town 43 miles outside of Tulsa with a population of about 3,400, including the prison. He calls his background “old school” and enjoys the outdoors, family, friends and church.

“I love being from the country,” the 6-foot-5, 259-pound University of Tulsa linebacker said during a pro day Zoom interview. “I love embracing where I’m from.”

The small-town pride wasn’t diminished by the difficulties Collins encountered as he tried to find a college scholarship to help him pursue his NFL dream. Despite possessing big-time athleticism and attending a parade of camps, he didn’t get an offer from an FBS school until Tulsa after the final camp before his senior year.

“I kinda told some of those people to p*** off,” Collins said of the colleges that passed on him. “It motivates me a lot. I’ve had a lot of coaches tell me I wasn’t good enough just based really on my school size.”


He heard similar dismissals during his time at Tulsa, which only fueled his competitive fire.

“We’re trying to build our brand here at Tulsa, but we’re blue-collar people,” he said. “We don’t like stuff handed to us. We work for what we’ve got.”

The perseverance has paid off for Collins, who’s no longer an underdog. He was a consensus All-American and won the Chuck Bednarik Award and Bronko Nagurski Trophy as the best defensive player in college football last season. He’s expected to be taken in the first round of the NFL Draft on April 29 and appreciates how far he’s come so fast.

He was a freshman All-American as a redshirt in 2018 and continued to improve but was still considered a fringe draft prospect when the 2020 season started. Then he “just went crazy” and his draft stock steadily rose.

“I was kinda like, ‘oh, man, this got out of hand quick,’” he said. “I wasn’t really worried about it, it just started flying by, it started getting crazy, I started talking to people and it happened so fast that you didn’t even know it was happening.”

The Browns have the No. 26 pick and could select Collins if he’s still on the board, as they look to add another difference-maker to the rebuilt defense. They’ve met virtually and shown interest in Collins, who said he loved their program.

Collins fit at Tulsa, which also gets overlooked.

“I think for Zaven, small town, same type of dynamic to it, and obviously it’s paid dividends for him and will continue,” Tulsa coach Philip Montgomery told The Chronicle-Telegram by phone recently. “I think he’ll keep that mindset, because that’s kind of his edge.”

Montgomery said it was tough to make a projection for Collins, because he played quarterback and safety at Hominy High School but would be moved to linebacker. Montgomery saw enough from Collins at the camp that he called his mom, Haley, out of the stands and made the scholarship offer official.

“To get the opportunity to watch him move in drills, do all of that gave us the chance to do a better evaluation of what we thought he could potentially end up being,” Montgomery said. “About halfway through we felt good about it. Mom was really emotional. Something they’d been dreaming about and working towards and finally had the opportunity to make it happen.”

Collins’ body has developed to the point he’s a rarity among linebackers. He’s 20 or 30 pounds heavier than most at the position but enjoys playing off the ball and chasing down plays and objects to the idea of an NFL team converting him to a full-time pass rusher.

The NFL in 2021 is so much about the passing game that linebackers are required to cover tight ends and running backs to stay on the field. Collins ran an unofficial 4.65-second 40-yard dash at the pro day, and Montgomery raved about his coverage ability.

“He’s so long and he’s got great feet and awareness about him,” he said. “He drops back into coverage and it’s hard to get the ball around him. And he does have such great ball skills, you know you have to be really intelligent about where I’m going to try to place the football.

“He’s so unique. He is so big and long but he’s so athletic.”

The athleticism translated to playmaking. In 32 career games in three years, he totaled 129 tackles, 25 tackles for loss, 7.5 sacks, five interceptions, eight passes defensed, three forced fumbles and three fumble recoveries. In eight games as a redshirt junior in 2020, he had 54 tackles, 7.5 for loss, four sacks, four interceptions — two returned for touchdowns — two forced fumbles, a safety and a fumble recovery. The signature play was a 96-yard pick-six for the win in overtime vs. Tulane.

“Everybody’s trying to schematically take him out of the equation and run away from him, do all this, try to double-team him. It didn’t stop his production, he just continued to make big plays at big times and was consistent throughout games,” Montgomery said.

Collin said all of Hominy is super excited for the draft. He’s motivated by a variety of things, but puts his mom at the top of the list.

“Doing it for her is probably the biggest thing,” he said.