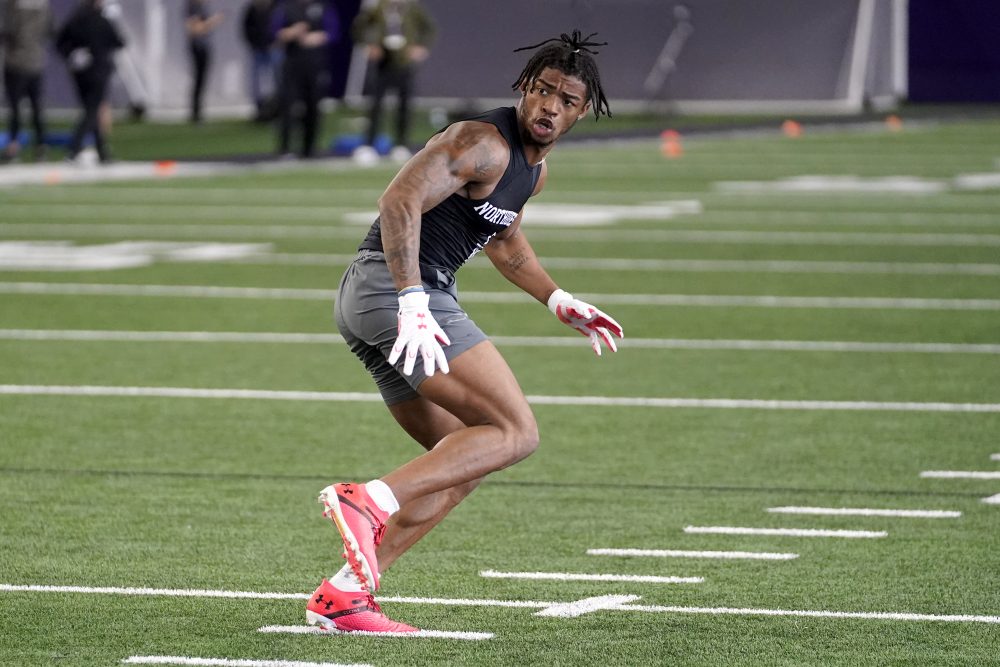 Northwestern’s Greg Newsome II surely caught people off-guard when he declared himself the best cornerback in the draft, as most experts rank Alabama’s Patrick Surtain II and South Carolina’s Jaycee Horn as the top prospects at the premium position.

A.J. Hampton wasn’t the least bit surprised at the show of confidence from his former teammate.

“Greg thinks he’s the best at everything. No matter what it is,” Hampton, a Northwestern defensive back, recently told reporters. “That’s why I love Greg. It’s just that chip on his shoulder.

“He takes everything personally. He wants to be the best and he wants to win. When you play with that chip on your shoulder, that why not me?, it really takes you to a totally different level.”


Newsome, who won’t turn 21 until May 18, attributes his edge to being under-recruited out of high school.

“I think I was still slept on,” he said last month at the pro day. “So I always had that in the back of my mind, and that’s kind of the way I play.”

The boulder on his shoulder stands out but doesn’t weigh him down.

“It starts at home. He’s from a great family. They’re going to humble him before I had to. Makes my job easy.”

Newsome (6-foot, 192 pounds) embraces the yin and yang of his personality.

“Off the field, I’m probably one of the nicest, sweetest guys. And on the field, I flip a switch and I’m a competitor,” he said. “I hate to lose. So that’s kind of the reason I play so hard.

The more analysts watch Newsome, the less he’s overlooked. He’s seemingly a lock to be taken in the first round — he and left tackle Rashawn Slater are expected to be the first first-round picks for Northwestern since defensive lineman Luis Castillo in 2005 — and Mike Renner of Pro Football Focus said he could prove to be the best corner in the draft.

In three seasons — he’s the first true junior at Northwestern to enter the draft since running back Darnell Autry after the 1996 season — Newsome had 71 tackles, 25 passes defensed and an interception in 21 games. He led the Big Ten with 10 passes defensed in six games in 2020 and didn’t allow a touchdown, earning first-team all-conference honors.

He was the definition of a shutdown corner, allowing 12 completions for 93 yards on 34 targets, good for a 31.7 opponent passer rating, the best of the corners in the draft. His pro day performance of an unofficial 4.38-second 40-yard dash, 40-inch vertical leap and 10-3 broad jump proved to scouts the tools will translate to the NFL.

“He’s a really loose, fluid athlete, so you start there,” NFL Network’s Daniel Jeremiah said Tuesday on a Zoom call. “His movement stuff is phenomenal. He’s got incredible ball skills. He can find and play the ball, which is like the No. 1 non-negotiable for me at that position. You’ve got to be able to find and play the ball. He does that really well.

“The only knock when you watched him on tape was like, OK, I questioned just how much pure juice does he have, how much top speed. He wasn’t really challenged vertically in any of the games I studied, so I was curious about that and he goes and runs 4.38. So he answered the bell on that one.”

The concern with Newsome is he has a lean frame and missed at least three games with injuries in all three seasons, including a groin injury at the end of 2020.

“But everything else checks out,” Jeremiah said. “Everything I’ve heard about the kid, he’s a great kid.”

The Athletic’s Dane Brugler ranks Newsome the third corner behind Surtain and Horn and 18th overall. Brugler likes Newsome’s feet and eyes and that he’s around the ball a lot.

He might not have been near a football field if not for his mom, who when Newsome was in sixth grade took him out of basketball and entered him in a seven-on-seven football league.

“I’m going to give all the credit to my mom,” he said. “I was mad at the time, but I think she chose the right thing for me.”

Newsome showed the impressive ability to recover on a double move by the receiver. His athleticism allows that, as well as a high football IQ. He likes that about three-time All-Pro Richard Sherman’s game and believes it’s a strength of his.

“I think it’s just savviness. He uses his smarts on the field and that’s something I kinda do,” Newsome said. “He knows where the ball is going just by splits or a guy’s steps. I like the way he plays zone. Jumps a lot of routes.”

When Newsome proclaimed himself the best corner in the draft at the pro day, he insisted he didn’t do it lightly. He gets no argument from Fitzgerald.

“And he’s physical. I call him a unicorn. He’s a high-level corner with zero off-the-field baggage. Matter of fact, it’s the other way around. He’s a great leader, a great captain-type guy and a terrific teammate. Greg’s got the tape to back it up at an elite level.”