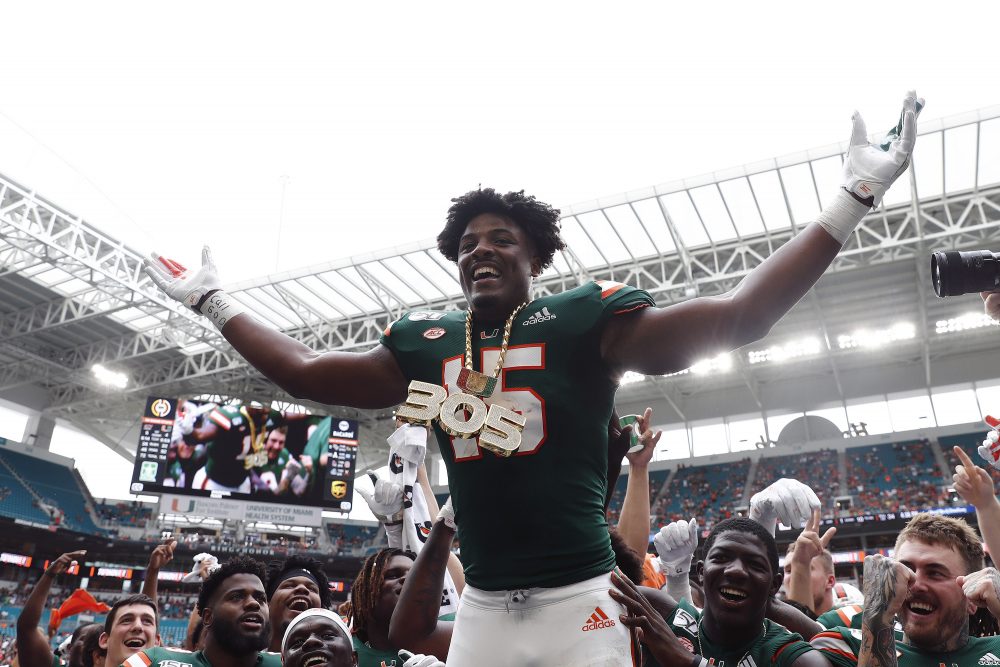 The search for a sidekick for Myles Garrett could take general manager Andrew Berry to sunny South Florida.

The Browns have yet to settle on a long-term partner for Garrett, their All-Pro defensive end. Emmanuel Ogbah was the other starting end when Garrett arrived as the No. 1 pick in 2017 and stayed through 2018. Olivier Vernon was then acquired in a trade and spent the next two seasons as Garrett’s bookend.

Jadeveon Clowney and Takk McKinley will take turns this year after signing as free agents. But they’re on one-year contracts, leaving an opening for a tag-team partner of the future.

Berry could fill it from the University of Miami on Thursday night with the No. 26 pick in the NFL Draft. The odds are doubled, with Hurricanes Jaelan Phillips and Gregory Rousseau among the potential candidates.

They could become the first pair of defensive ends from the same school to be drafted in the first round since North Carolina State’s Mario Williams and Manny Lawson in 2006.

Phillips was the nation’s No. 1 recruit coming out of high school in California. He plays hard and led the Hurricanes with eight sacks and 15.5 tackles for loss in 10 games in 2020, his lone season with Miami. He was disappointed in his unofficial but impressive 4.57-second 40-yard dash at the pro day and vertical jumped 36 inches and broad jumped 10-5.

“The guy that could be the best edge rusher is Jaelan Phillips,” SiriusXM NFL Radio analyst Gil Brandt said on a conference call. “If you can take a chance on him and you hit on him, it’s pretty good.”

He’s risky because there are concerns that could cause him to stick around long enough for the Browns to have a shot at him. None more serious than the three diagnosed concussions that prompted him to retire in 2018 at UCLA. He’s had other injury issues, including a wrist that required surgery after a moped accident, and could be removed from some teams’ draft boards.

“I didn’t miss a game,” Phillips said of last season at the pro day. “That wrist is still working. Obviously I’m healthy. I don’t think it’s a risk at all.

“We play a dangerous and violent game, so obviously people get hurt. I wouldn’t be here today if I was a risk. I’m a guy who does all the right things, does all the extra things to make sure my body’s on point.”

Phillips transferred to Miami in part to attend its famed music school. He’s spent time rapping and producing, which could worry some NFL executives.

Browns fans might have flashbacks to Chad “Major Nine” Thomas. The defensive end from Miami was a third-round pick in 2018 but remains more famous for his work on stage and in the studio after lasting only two years in the league.

“Obviously people have other interests,” Phillips said. “It would be boring to just have one thing that you do.

“Music isn’t a distraction by any means. I came to Miami, was in the music school and stopped that because it was getting in the way of football. Obviously I love music, but I love football more.”

Phillips will be given a chance to prove that in the NFL, something that wasn’t part of his plan and didn’t seem possible a couple of years ago.

“Everybody’s path to success isn’t linear at all,” said Phillips, who emphasized how grateful he is for Miami giving him a second chance. “There’s ups and there’s downs, and I think all of that really gave me a better look at everything. It made me have this chip on my shoulder. It gave me a deeper appreciation of what the game is and what it brings to me.

Phillips and Rousseau are both proud Hurricanes but never played together. Rousseau led the ACC with 15.5 sacks as a redshirt freshman in 2019 but opted out of 2020 due to COVID-19 concerns. His numbers and length, which includes an 83¼-inch wingspan, have captured the attention of scouts, but he’s a sizable projection.

He was a defensive back for most of his high school career before transitioning to the line. He started only seven games at Miami, as his freshman year in 2018 ended after two games because of a broken ankle.

He’s still growing into his frame and needs to get stronger and more refined in his technique. And while many top prospects wowed at their pro days, Rousseau, 21, underwhelmed with a 4.67 40, a 30-inch vertical, a 9-7 broad jump and 21 repetitions of 225 pounds on the bench press.

“I feel like I left some things out there,” he said. “I could have done better. But there’s always room for improvement.”

“A lot of media speculation about @Greg_R5,” he tweeted. “I’ve already had multiple teams tell me that they will take him in the 1st round if he is there when they pick.”

Rousseau can line up on the edge and slide inside to rush the passer. Coach Manny Diaz called him “relentless,” but he remains a mystery to NFL teams.

“I don’t have a lot of film, but I feel like I showed a lot in the time that I did play, my redshirt freshman year,” Rousseau said. “I feel like I proved a lot. I also feel like I’m a very versatile athlete and I fit into a lot of schemes and I’m just going to be somebody who’s hardworking from Day 1. I’m ready to get to the next level.”

Phillips said he studies Garrett and has talked to the Browns. Rousseau was excited by the idea of joining Garrett.

“That would be awesome,” he said. “Myles Garrett, he’s a freak athlete. For me to have an opportunity to learn from him would be amazing.”

The Browns could do worse than a choice between the Hurricanes.

“With Rousseau I see athleticism and bend and flexibility and closing burst,” ESPN’s Todd McShay said on a conference call. “With Phillips I see power. He’s just one of those guys that can turn speed to power, drive an offensive tackle back, push him out of the way and then go finish as a pass rusher.

“They’re different in their approach but they’re both really good pass rushers. If you can get a Jaelan Phillips or a Rousseau in the second half of the first round, you’re getting lucky because this year is so loaded with quarterbacks and pass catchers early that these guys are going to fall a little bit.”