Mailbag: Is a big trade coming Thursday night? Who are the best options at No. 26? What about Zaven Collins? 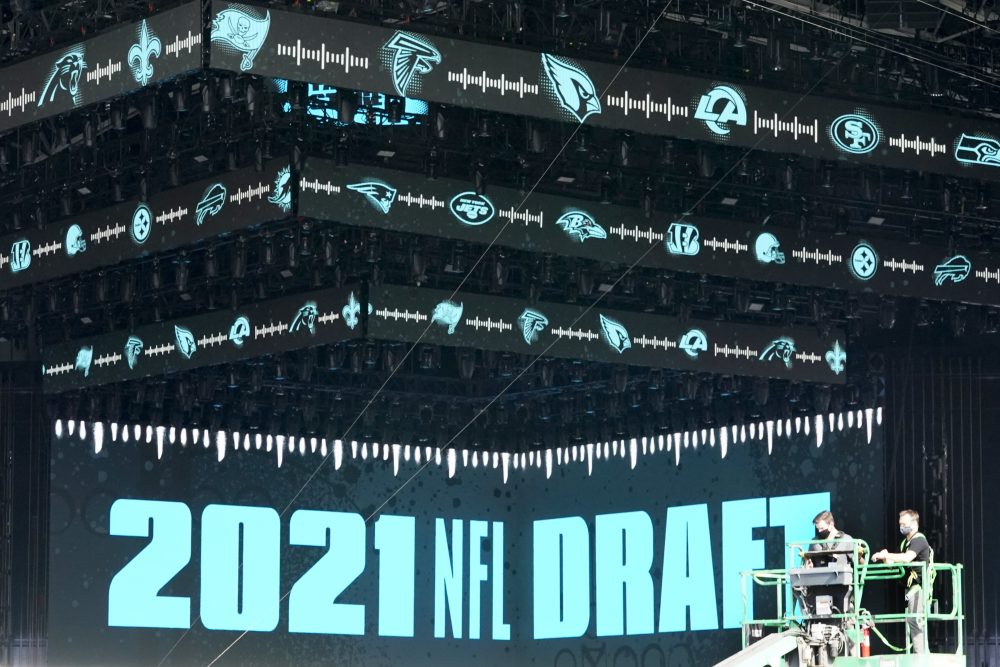 Q: I know GM Petrak has been doing some long days leading into the draft. Are you going to pull the trigger on any big trades come Thursday night if you were in charge??? Are you buying or selling???

A: I don’t think any of my deals would qualify as “big trades.” I just don’t think there’s a player in the draft for the Browns worth going from No. 26 into the top 10, especially for what it would cost.

But I’m going to give you my three scenarios for Thursday night.


If Northwestern cornerback Greg Newsome II is still on the board at No. 21, I’d trade a third-round pick to move up five spots and grab him. The Browns need to come away with a corner in the first two rounds, and he’s the best one within their range.

If Newsome is already gone, which is a distinct possibility, I’d stay at No. 26 and draft Virginia Tech cornerback Caleb Farley. The two “minor” back surgeries are major concerns, but his ceiling is through the roof. I think the Browns are finally in a position where they can take this type of calculated gamble.

If the top four corners are gone, including Newsome and Farley, I’d trade back, whether to No. 30, No. 32 or into the second round. If the Browns could pick up a second-round pick in 2022 to move back 10 spots, that’s a good long-term move. And the draft is deep enough in corners and defensive ends that they could pick up one of each in the second round.

Q:
I’m not thinking LB until much later. I would love Newsome, Jaycee Horn or Farley at #26. They need WR to open the field up. Jayson Oweh sounds great but 1st round potential not production. Who are you taking instead?

A: My list starts with Newsome and Farley then shifts to ends. Kwity Paye is my No. 1 end, followed by Oweh and Gregory Rousseau. I’m fascinated by Jaelan Phillips but am too worried about the concussion history to take him in the first round.

I like a few receivers but would rather wait until the second or third round to go there.

Jimmy and Dee Haslam thrilled with 2020 success and organizational setup, haven’t forgotten how hard it is to win in NFL

Q: I’m forming this question from the Twitter conversation that followed my last mailbag: How would you rank the value of Nick Chubb, Denzel Ward and Wyatt Teller when it comes to signing long-term contract extensions?

A: Ward, Chubb, Teller. To me, this is all about positional value. Cornerback is a premium spot, while running back and right guard aren’t. I base that on the ability to find a quality replacement.

If I’m asked to rank the players, I would go Chubb, Ward and Teller. I think Chubb is the best pure runner in the league and he might be the hardest worker on the team. The issue is he plays a position where it’s difficult to play at an elite level for a decade. I would still have little hesitation about giving him an extension. The Browns use him as the model for other players and have a run-heavy offense, so he’s the perfect player to make an exception to any organizational philosophy about not paying big money to running backs.

I also think extending Ward is just about a no-brainer. We’ve established the importance of cornerback and he’s played at a Pro Bowl level despite missing games with a few injuries. I wouldn’t be surprised if the extension didn’t happen until after this season but I’m confident it’ll get done.

I feel the opposite about Teller. It has little to do with his ability and everything to do with the Browns having to manage the salary cap and all the talent on the roster, I don’t think they can pay a right guard top dollar — especially with the resources devoted to the rest of the line.

Q: How about trading #26 to HOU for their 2022 1st- and 3rd-rounders and this year’s 3rd-round pick? They have ZERO in the 1st or 2nd this year and must be DESPERATE to draft earlier than in the 3rd round.

A: An interesting proposal, and I would definitely make that trade. I expect the Texans to be awful this season, which would put their pick in the top five for 2022 and be immensely valuable. Of course, that’s why the Texans would be reluctant to make the move. I doubt their desire for a first-round pick this year trumps trading away another first-rounder.

From the Browns’ perspective, I think they’re perfectly positioned to take advantage of desperate teams and take a long-term view.

Q: The guy who keeps standing out to me is Tulsa linebacker Zaven Collins because he is a prototype for the modern NFL second-layer defender. Collins is that all-purpose, big, athletic, mobile, active, fast, tough, instinctive, sideline-to-sideline, three-down ’backer who could spy mobile QBs, while also satisfying all other demands of the complex position.

A: You make a compelling argument. And I’m not ruling him out.

But I have two reasons I don’t think it will happen.

You may disagree, but I still don’t think the Browns value linebacker enough to spend a first-round pick on one. Maybe Collins is the outlier for whom they make the exception, but I’m having a hard time seeing it. My other issue is I’m not sure Collins is fast enough. I know 40 times aren’t everything and he’s way bigger than his counterparts, but he ran a 4.65 at his pro day while Penn State’s Micah Parsons ran 4.36 and Kentucky’s Jamin Davis 4.47. I think coordinator Joe Woods’ scheme is largely based on the ability of his linebackers to run and cover and I’m not sure Collins will do that well enough at the next level.

Q: Joe Woods moved Myles Garrett all over the field last season and it usually worked to his advantage. Now that Coach Woods has another big-time edge rusher in Jadeveon Clowney, when both Garrett & Clowney are on the field do you think Woods continues to be unpredictable about where Garrett lines up?

A: No doubt. One of the things the Browns love about Clowney is his versatility. Not only can he flop edges, he can slide inside. So with the additions of Clowney, end Takk McKinley and tackle Malik Jackson, Woods will be able to move Garrett wherever he wants in the search for the most favorable matchup.

Q: I love doing the mock draft scenarios, but I am curious. Almost every time I pick there is a trade offer, which is great for me because I love to trade, but do the Browns get trade offers for most, if not all, of their picks during the draft?

A: Interesting question. I don’t think they get an offer for every pick but I’d guess the majority. That includes teams just checking in to see if they’re interested at all in dealing. I think serious trade talks happen for three or four picks, unless you’re a GM known for moving. That surely generates more calls.

Mailbag: Could Browns draft a safety in 1st round? What does release of Sheldon Richardson mean for draft plan? Can Richardson re-sign?
Mailbag: Which veterans are vulnerable after the draft? Is another corner coming? What are Kevin Stefanski’s biggest concerns?