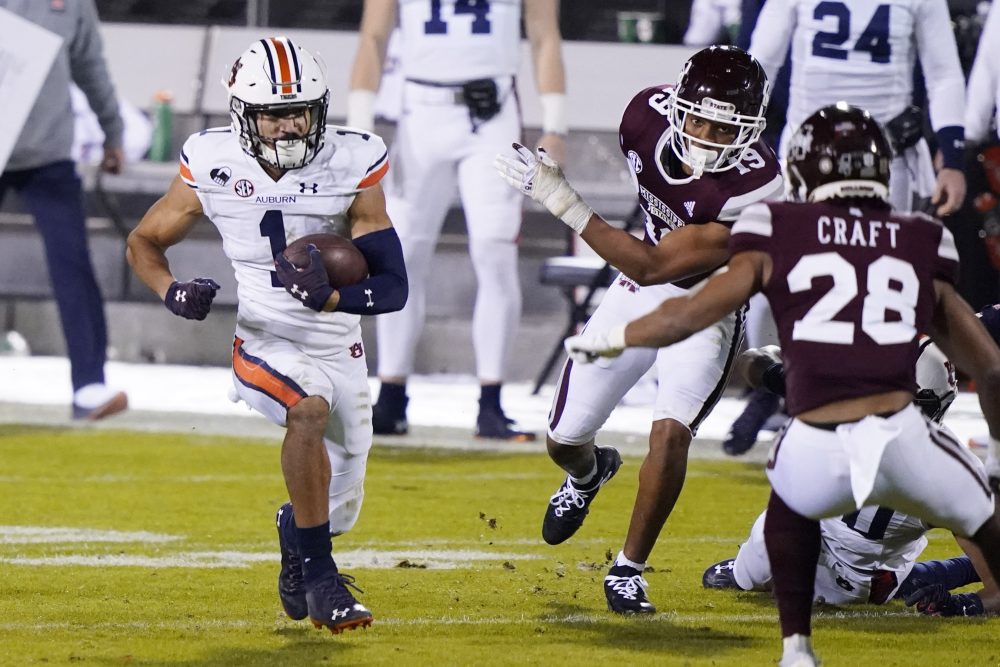 CLEVELAND — The most intimidating player on the Cleveland Browns walked on stage and read the name of who will now be the fastest.

Pro Bowl defensive end Myles Garrett got a rousing ovation by the hometown crowd Friday moments before announcing Auburn wide receiver Anthony Schwartz had been selected by the Browns in the third round with the 91st overall pick.

His speed is no secret, as Schwartz doubled as a sprinter for the Tigers track team and was named Gatorade’s national track athlete of the year in 2018. He also set a world youth record in 2017 by running the 100 meters in 10.15 seconds.

“I know what I can bring to the table,” he said in a Zoom call. “I can run the whole route tree and I can run in and out of breaks.

“Every time you throw it deep I’m grabbing it and it’s going to be a touchdown.”

After a series of headline-grabbing moves on defense, including the drafting of cornerback Greg Newsome II and linebacker Jeremiah Owusu-Koramoah, Schwartz was the first significant offseason addition to the offense, which is set to return all 11 starters and key backups. Schwartz led Auburn with 54 catches for 636 yards, an 11.8 average and three touchdowns in 2020.

He also scored seven rushing touchdowns in his three-year career, including five as a freshman in 2018. He wants to return kicks after doing it in high school but not Auburn, where they had a returner.

The Browns were looking for another speed threat besides Odell Beckham Jr., who missed the second half of last season with a torn anterior cruciate ligament. Without Beckham and JoJo Natson, who also suffered an ACL tear, coach and play caller Kevin Stefanski went away from the jet sweep action that gave the defense something else to think about and opened things for the run game.

“What attracted us to Anthony is his ability to stretch the field,” general manager Andrew Berry said. “I think that is something that we felt coming out of last year, especially with Odell’s injury, is a dimension that was not quite as strong as when Odell was healthy throughout the year. Anthony certainly gives us multiple guys with the ability to really stretch the field vertically.

“Very, very smart. A very quick study. I think his best football is in front of him.”

The special speed can be intoxicating.

“I take a lot of pride in that,” Schwartz said. “If you give me the ball, I will get around the defender, whether I run through you, run around you or just burn you.”

“We have a very explosive offense,” Schwartz said. “Baker (Mayfield) can sling it. He knows what he’s doing. I can bring a new factor to the offense and that’s speed. I think I can help us become a very balanced team.”

Schwartz has trained with Landry in Florida, plans to “put even more work in” with him and is glad to know someone in the receivers room.

“Just hope that I can learn some things from him being in the league for around eight years now,” Schwartz said. “He was in the league when I was in middle school. It is just crazy to see that and crazy to just play with these great guys.”