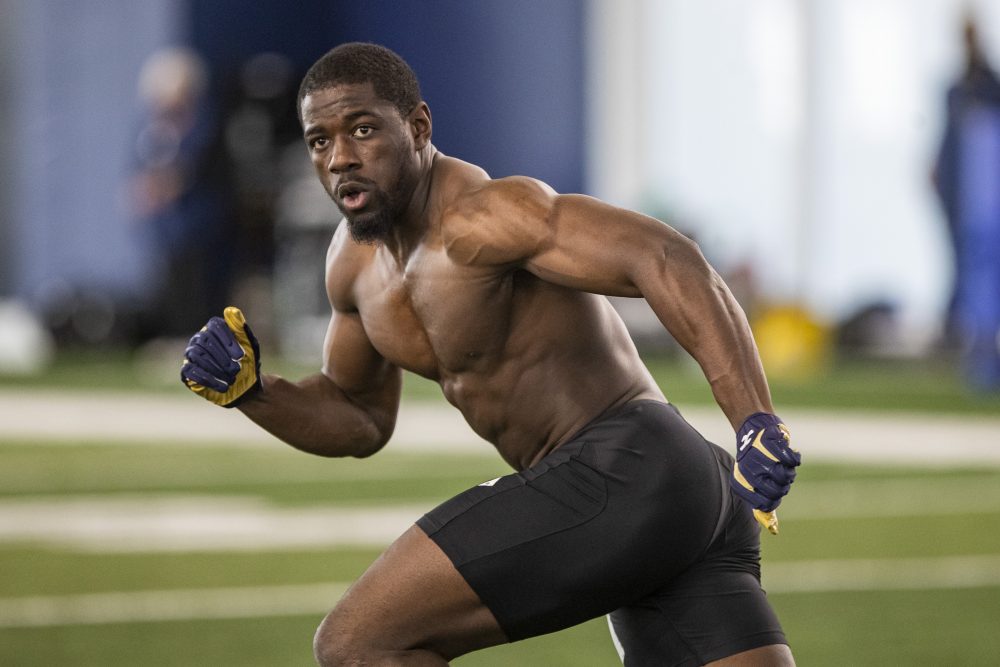 The Browns didn’t expect Notre Dame linebacker Jeremiah Owusu-Koramoah to be available well into the second round.

When he was, the pacing began at team headquarters in Berea. The trading followed, then the scheming.

The Browns traded up from No. 59 to No. 52 in the second round of the NFL Draft on Friday night to make sure they wouldn’t miss out on Owusu-Koramoah, the speedy, versatile playmaker. Cleveland sent the Nos. 59 and 89 (third round) picks to the Carolina Panthers in exchange for Nos. 52 and 113 (fourth round).

“A glorious feeling. It is a monumental feeling,” Owusu-Koramoah said on a Zoom call. “It is all love. It is a genuine feeling that the coaches would take a chance on me, and I am appreciative to that.”

The Browns ended the night by taking Auburn receiver Anthony Schwartz with the No. 91 pick. He’s 6-foot, 186 pounds and has sprinter’s speed, unofficially running the 40-yard dash in 4.25 seconds.

Northwestern cornerback Greg Newsome II was the selection at No. 26 on Thursday — DePodesta said Owusu-Koramoah would’ve been considered if Newsome wasn’t there — and he followed a free agency devoted to rebuilding the defense. Safety John Johnson III, ends Jadeveon Clowney and Takk McKinley, nickelback Troy Hill, linebacker Anthony Walker and tackle Malik Jackson were signed in the extreme makeover.

“We knew we were going to have to do a lot this offseason to try to rebuild that unit for 2021,” DePodesta said.

The Browns could have as many as nine new starters on defense from last year, when the offense led them to an 11-5 record and the first playoff win in 26 years.

“We were pretty happy,” DePodesta said with a laugh regarding Owusu-Koramoah being available. “There was a lot of pacing going on upstairs once we got to about pick 42, 43, 44, just trying to figure out if there was a way we could make it happen. So we were very excited about this.”

DePodesta said that before he got on the Zoom call, he saw coach Kevin Stefanski, coordinator Joe Woods and linebackers coach Jason Tarver on the white board devising ways to use Owusu-Koramoah, who said he pictured himself in the Browns scheme while watching them play in the fall.

“I think speed and instincts,” DePodesta said when asked what he likes best about him. “He is very, very good against both the run and the pass. We think he can stay on the field the whole time, but he really just fits our scheme to a T.”

Owusu-Koramoah is a bit undersized at 6-1½, 221 pounds but makes up for any lack of height and weight with speed and versatility.

He won the Butkus Award in 2020 as the nation’s top linebacker and was a unanimous All-American. In 12 games he had 62 tackles, 11 tackles for loss, 1.5 sacks, three forced fumbles, an interception and four passes defensed.

“I’m a versatile guy,” Owusu-Koramoah said. “I can be in the box, I can be over the edge, I can be in the apex or what you’d call the alley. I think that’s the reason why the Cleveland Browns chose me, because I can do all those things.”

DePodesta said the Browns view him as a linebacker despite some teams wondering if he should be a safety. DePodesta said there were no major medical concerns that would’ve caused Owusu-Koramoah to fall.

“I know there’s been talk that he could play strong safety or do lots of different things,” DePodesta said. “I just think that speaks to his athleticism and his versatility and I think he fits our scheme perfectly at the linebacker spot, and that’s where we plan to play him.”

“I am happy with whatever position they put me in,” he said. “It goes back to just being able to love these things. I love football. I love the game. I love the process. I love what it has taught me. It is almost a father figure to me.

“You get out there and play any position that they put you at and find out what the culture is. The culture — I repeat it all of the time — smart, tough and accountable. Those are the three pillars, and those are things I am looking to harp on.”

Schwartz was the first significant offseason addition to the offense, which is set to return all 11 starters and key backups. Schwartz led Auburn with 54 catches for 636 yards, an 11.8 average and three touchdowns in 2020.

He was the Florida state 100-meter champ in 10.07 and ran track for Auburn. The Browns were looking for another speed threat besides Odell Beckham Jr., who missed the second half of last season with a torn anterior cruciate ligament.

Owusu-Koramoah can run, too, but he loves to hit.

The Browns were happy to trade back from the third to fourth round rather than give up a pick. And the selection of Owusu-Koramoah proved one thing about the Browns on two fronts, according to DePodesta: The Browns have rules to govern their decisions but they’re flexible.

Their general philosophy is to trade down to acquire extra picks but they’re willing to make an exception. And even if they don’t value linebacker as much as other positions, it didn’t stop them from trading up to get one they really like.

Owusu-Koramoah is from Hampton, Va., and was watching the draft from home. He went to the same high school as Pro Basketball Hall of Famer Allen Iverson and was expecting a congratulatory text.

Owusu-Koramoah hoped the Browns would take him No. 26. When they didn’t and he started to slide past the midpoint of the second round, he said he had to find patience.

“It is just a matter of controlling what you can control, and the things that you can’t control, you have to let those stand by,” he said.

NFL Draft: Northwestern CB Greg Newsome II says he was meant to fall to Browns at No. 26
NFL Draft: Auburn WR Anthony Schwartz brings the speed at pick No. 91