Notes: Greg Newsome II set to fulfill promise to mom, graduate this quarter after only 3 seasons at Northwestern 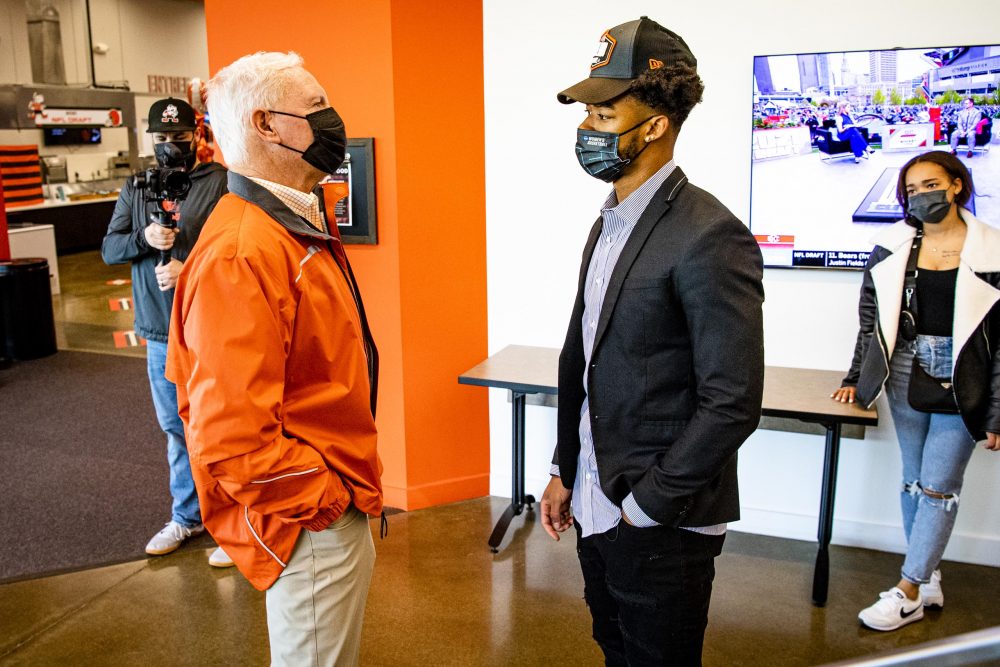 He won’t exit Evanston, Ill., without a diploma.

Newsome, the Browns’ pick at No. 26 on Thursday night, is on schedule to graduate this quarter with a degree in communications.

“He promised his mom he was going to get his degree and wrap it up here at the end of the spring quarter, so if he doesn’t do that I’m going to fly over to Cleveland and I’m going to punch him in the face,” Fitzgerald said Friday on a Zoom call with reporters.

Newsome, who will turn 21 on May 18, said he struggled at Northwestern after graduating from IMG Academy in Florida and early enrolling to get started with football practice. But he settled in and has a 3.2 cumulative gpa.

“I am not going to lie, my first quarter I was like it is football, it is football, I am going to lock in on football,” he said on a Zoom from Browns headquarters. “My gpa was not necessarily bad, but I really was not locked in on (academics). I had to realize that one of my goals was to declare for the draft and be the first three-and-done in Coach Fitz’s tenure, and I knew that first of all I was not going to be able to do it if I did not get my degree because my mother was going to kill me.

“I was like, ‘Let me lock in and make sure that I get my classes done.’ I was able to boost my gpa up like crazy. Honestly, it just comes down to time management. When I put my mind to something, I want to be the best at it. I just put my head down, worked at it and that has put me in this position right now to graduate this quarter.”

The Browns always say they’re looking for smart, tough, accountable players, and general manager Andrew Berry raved Thursday about Newsome’s football intelligence when they watched film. He also loved Newsome’s athleticism, calling him one of the more well-rounded corners in the draft without a hole in his game.

Newsome said the same applies to the Northwestern football program, which had two first-round picks for the first time Thursday. Tackle Rashawn Slater went No. 13 to the Chargers.

“I take so much pride in that,” Newsome said. “It says that we are not just an academic institute but we produce players, as well. That is something that we have been trying to tell the world for a while now.”

NFL Commissioner Roger Goodell joked about the cold weather at the end of April but was complimentary of Cleveland serving as host of the draft for the first time.

“We are so thrilled to be here, and the hospitality has been so wonderful,” he said at an event at Shaw High School. “We look forward to coming back.”

Owner Dee Haslam said Tuesday she was hopeful the NFL would bring the draft back sooner than later, especially because the event isn’t at full capacity given the COVID-19 pandemic.

Goodell joined Browns ownership and coach Kevin Stefanski for the groundbreaking of a synthetic field at Shaw in East Cleveland. It’ll be the 10th field donated and installed by the Browns across northern Ohio, including at Lorain’s George Day Field.

“It is great to be here,” Goodell said. “I want to thank all of you who made this a reality and so many other things that are going on in this community that are great or our kids and for our community. It is so important to do things for our kids and to have an opportunity for each of us to help one another and have an impact.”

The Shaw site has special meaning because the Browns practiced there at times during the 1960s and ’70s, according to emcee Chris Rose of NFL Network. The Cleveland Rams, the predecessor to the Browns, played games there.

But the facility had declined to the point the Shaw Cardinals couldn’t play there last year.

Shaw student Mya Tomoto was praised for the job she did announcing the Newsome pick Thursday night on the giant stage on the lakefront and in front of a national TV audience.

“I also have to give a shout-out to Mya Tomoto,” said Whitney Haslam Johnson, Haslam Sports Group/Browns partner. “You did an awesome job selecting our first-round pick, Greg Newsome. Like so many other students, Mya is an engaged student willing to step up, especially during difficult times helping students with homework and technical needs.”

Tomoto, 17, helped close the digital divide in her community.

The first round drew an average of 12.6 million viewers across TV and digital platforms, according to the NFL. It was the second-highest viewership for Day 1, behind last year, when 15.5 million watched during the depths of the pandemic.

** The Browns are tied as the fourth favorite (12-to-1) to be the next team for Packers MVP quarterback Aaron Rodgers if he’s traded, according to BetOnline.ag. The Broncos are the favorite at 2-1, the Raiders 6-1, the Dolphins 10-1 and the Saints also 12-1.

** Newsome is the eighth player from Northwestern drafted by the Browns, the first since safety Ibraheim Campbell in 2015.