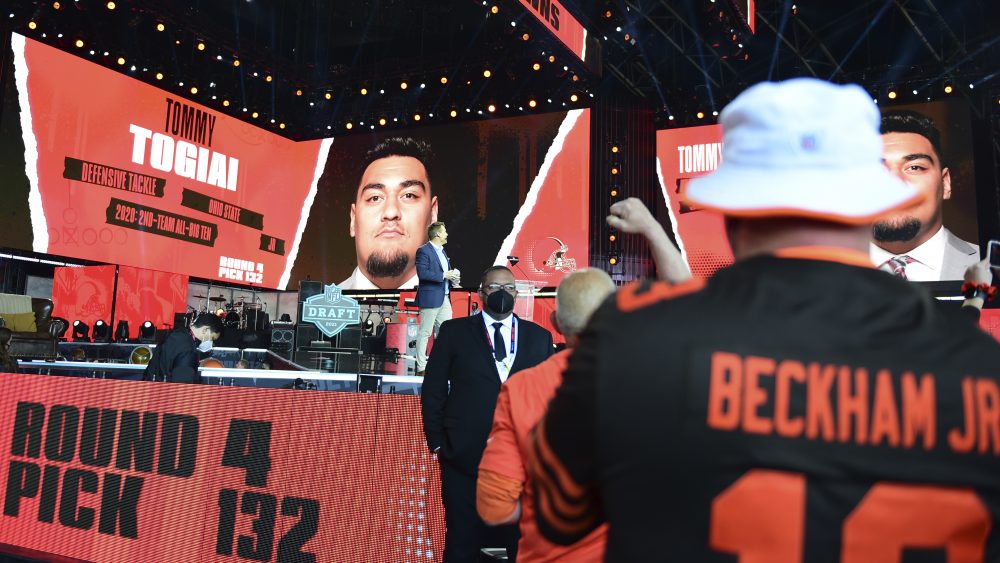 The personnel and coaching staffs were back in Browns headquarters for the draft after spending last year’s three-day marathon at home.

Everyone left Saturday night with a story about defensive coordinator Joe Woods’ excitement.

“He was pretty psyched after the first pick, and then after the second pick, I do not know if he could keep it together,” vice president of player personnel Glenn Cook said. “We are all excited about those guys.”

Northwestern cornerback Greg Newsome II was the choice at No. 26, lasting longer than many thought he would. Owusu-Koramoah was the guy at No. 52 after the Browns traded up seven spots. They had considered him in the first round.

It’s a two-round tandem even the Browns couldn’t envision.

“No way. No way, no how,” national scout Charles Walls said. “We are happy, though.”

Five of the rookies are on defense — defensive tackle Tommy Togiai linebacker Tony Fields II, safety Richard LeCounte — continuing the offseason reclamation project taken on by second-year general manager Andrew Berry. He already had Woods buzzing by signing six key free agents on that side of the ball.

“We did everything in our power to make sure that we could acquire talented players who fit the vision (coach) Kevin (Stefanski) and Joe have for our defense,” Berry said. “We love the guys we brought in this offseason and we are optimistic that they are going to be very capable producers.”

The draft was the latest vehicle for Berry to show his patience, flexibility and intelligence. He used eight of nine picks and acquired a fourth-rounder in 2022. He stayed put and still got Newsome. He traded up to get Owusu-Koramoah without losing a pick.

“Do you know this guy? Does he look like a ‘wing it’ guy?” Stefanski said when asked if Berry ever went off script.

“I can’t say that I remember a moment where that was the case,” Berry said.

His 15 months on the job, which started as the youngest GM in NFL history at 32 years old, have taken the Browns from dysfunctional disappointment to second-round playoff team to serious Super Bowl contender.

The rest of the NFL might want to take that advice.

The offense was first on the to-do list in 2020. Berry paid in free agency for right tackle Jack Conklin, tight end Austin Hooper and quarterback Case Keenum then drafted left tackle Jedrick Wills with the No. 10 pick, all in a successful attempt to support young quarterback Baker Mayfield.

“As soon as he got hired he said ‘We are going to be aggressive in adding players and adding competition to our roster,’” Chapple said of Berry. “He’s been able to follow that up in every single phase, whether it is trades, whether it is free agency or whether we are seeing it now with the draft. It is really cool to see just the evolution of the roster.”

During the draft the Browns targeted programs from big conferences, including Ohio State, Georgia, West Virginia and UCLA.

“Ohio State is such a great program so anytime you can add a guy out of there you feel pretty strongly about what you are getting,” Saganey said of Togiai.

They also went after elite traits. Auburn receiver Anthony Schwartz ran a 4.25-second 40-yard dash and immediately became the fastest player on the team, while Togiai bench pressed 225 pounds 40 times, and the power translates to the field.

“We really went into it to find players who fit their roles within our offensive and defensive systems,” Berry said. “Certainly versatility is an added bonus, but really, we went with prospects that we thought were, No. 1, very talented and, No. 2, had the physical and mental characteristics to execute their responsibilities within our offensive and defensive schemes.”

Berry’s previous work on the roster allowed him to be flexible in the draft. He wasn’t forced to take a position — he didn’t select a defensive end, tight end or guard — but could attack the positions and players he wanted.

“It is nice to not be handicapped by just drafting based strictly for need, and it is almost a perfect storm when a need lines up with best player available,” Chapple said. “That is when you kind of start hitting on all cylinders.”

Excitement is always high after the draft. It’s the ultimate venue for optimism.

But the hope for the Browns is based in reality. They went 11-5 and won a playoff game last year.

“We are really just building on something that we think is pretty special in this building right now and just trying to take it one day at a time, one practice at a time and one game at a time and try not to look too far ahead or get too caught up with how the roster looks on paper,” Chapple said.

As anyone who saw Woods’ smile can attest, the vibe is strong.

“The energy that is going in this building right now is positive,” Walls said. “We are very proud of what we are doing.”

Just like Berry isn’t one to wing it, he’s not one to take a victory lap before the race is finished. He reminded everyone the games don’t begin for more than four months.

“We are certainly hopeful and excited about the guys we were able to add to the organization, but we have a lot of work to do before we reach our ultimate goals this season,” he said.