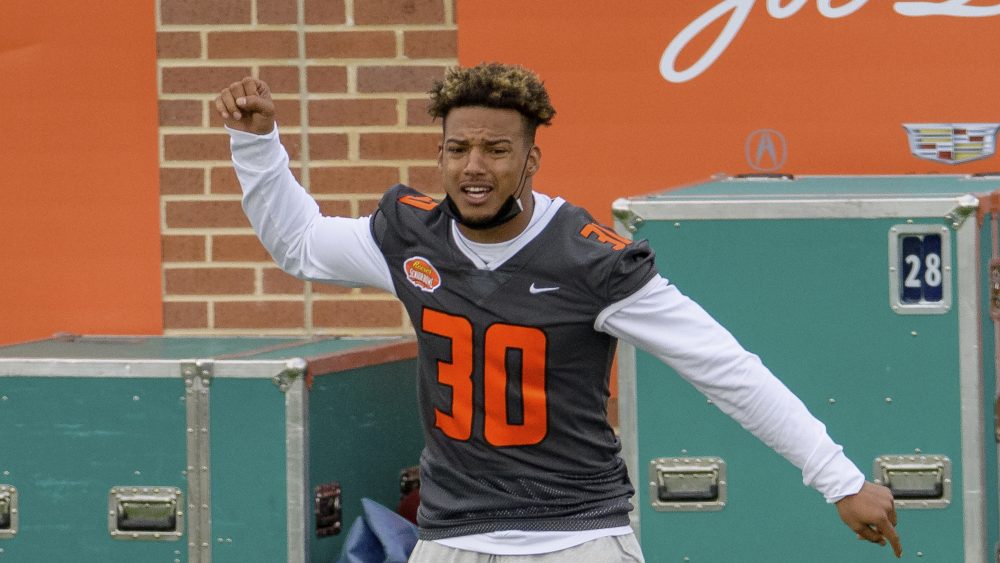 The Browns selected West Virginia  linebacker Tony Fields II with their first pick in the fifth round — No. 153 overall. He’s the second linebacker selected by the Browns during the draft after Notre Dame linebacker Jeremiah Owusu-Koramoah in the second round (No. 52) on Friday.

The Browns also took defensive tackle Tommy Togiai in the fourth round.

Cleveland acquired the 153rd pick earlier Saturday in a deal with Detroit, which also sent the Browns a 2022 fourth-round pick. The Lions received Cleveland’s second fourth-round pick (113) and its seventh-round pick (257). The 113th pick initially belonged to Carolina, but was sent to Cleveland when it moved up seven spots to pick Owusu-Koramoah.

Tackling shouldn’t be an issue for Fields, who’s piled up a ton since the day he started competing in college football. He started all 37 games for Arizona from 2017-19, earning freshman All-America honors in 2017 and recorded 287 tackles during his first three years.

He enrolled at West Virginia as a graduate transfer in 2020, earning first-team All-Big 12 honors from the coaches and the Associated Press. He led the Big 12 with 9.8 tackles per game, ranking 16th in solo tackles with 34.

The safety-loving Browns took one in the fifth round, Georgia’s Richard LeCounte III. He was the No. 169 pick.

He was productive in 44 games at Georgia, totaling 176 tackles, eight interceptions, 18 passes defensed, four forced fumbles and 6.5 tackles for loss.

He missed time at the end of the 2020 season following a serious traffic accident. He was riding an off-road motorcycle when he tried to avoid a car, slid and hit two cars, according to police. He spent two days in intensive care and suffered a concussion among other injuries, his mother told the Atlanta Journal-Constitution.

Versatility was a theme for the Browns on the final day of the draft.

Cleveland selected UCLA running back/wide receiver Demetric Felton in the sixth round, using the 211th pick to add a shifty, speedy playmaker who should help out on offense and special teams.

Felton combined for 2,258 all-purpose yards in his junior and senior seasons with the Bruins, beginning his career as a wide receiver in 2017-18 before enjoying a breakout 2019 season that saw him pile up 925 total yards and five touchdowns. He did most of his damage through the air — 55 catches for 594 yards and four touchdowns. He set a UCLA single-season record with four touchdowns of 75 yards or more.

Last season, UCLA gave him 132 carries on which Felton averaged 5.1 yards (668 total) and five touchdowns. He also added 22 catches for 159 yards and three touchdowns in being named second-team All-Pac-12. He led the team in rushing and the league in all-purpose yards with 165.8 per game.

DRAFTED: Fifth round, No. 153 overall

** He continued that success in the Big 12, leading the league with 9.8 tackles per game and ranked 16th in the league with 34 solo tackles in nine starts. He was named first-team All-Big 12 by the coaches and the Associated Press.

** Earned freshman All-America honors by ESPN and 247Sports in 2017 after starting all 13 games for Arizona. He had seven double-digit tackle performances and led the team with 104 total tackles, which was the most for a Wildcats freshman in more than 20 years.

DRAFTED: Fifth round, No. 169 overall

NOTABLE: LeCounte’s 2020 season was cut short after six games after sustaining injuries during an Oct. 31 traffic accident. He returned to take one snap in the Peach Bowl against Cincinnati on the final play.

** The senior was well on his way to a career year after recording career highs in tackles (13) and pass breakups (three) in a win at Kentucky, earning him Southeastern Conference Defensive Player of the Week honors for the effort.

** He was third on the team in tackles with 26 and led Georgia with three interceptions prior to the accident.

** In 2019, LeCounte was the team’s third-leading tackler with 61 — 35 solo — and led the SEC in fumbles recovered (three) and was second in interceptions with four. He recorded two interceptions in the team’s Sugar Bowl win over Baylor.

DRAFTED: Sixth round, No. 211 overall

NOTABLE: Initially a wide receiver, Felton moved to running back in coach Chip Kelly’s spread scheme. He led the Pac-12 with 165.8 all-purpose yards per game and earned second-team all-league honors in 2020.

** He set a UCLA season record with four touchdowns of 75 yards or more.