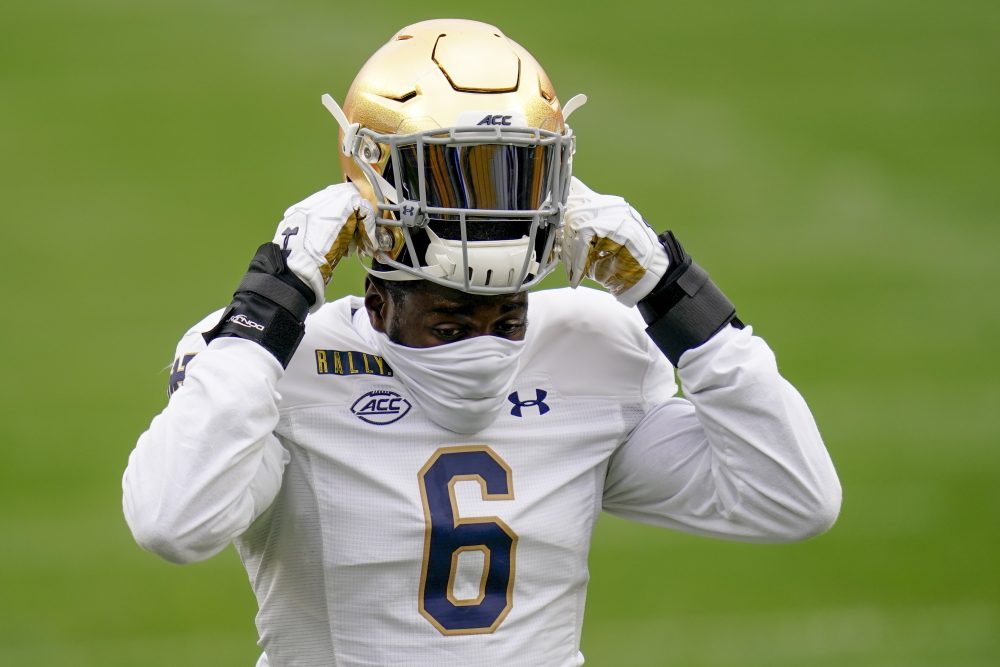 The Browns got faster and smaller at linebacker with second-round pick Jeremiah Owusu-Koramoah from Notre Dame and fifth-rounder Tony Fields II from West Virginia. Owusu-Koramoah is 6-foot-1½, 221 pounds and Fields 6-0, 222.

“The one thing about these guys that we have taken and just our room in general, we are violent,” he said Saturday during Day 3 of the NFL Draft. “We are going to be violent and explosive. When you watch these guys, I do not think anyone would call them finesse players just because they have range. They do take off, they do hit and they seek that contact.”

The shift in linebacker profile is by design. The Browns value speed across the roster and felt it was lacking in the middle of the defense last season. General manager Andrew Berry signed free agent linebacker Anthony Walker and drafted Owusu-Koramoah and Fields.

The goal is to defend sideline to sideline, cover running backs and tight ends in the passing game and keep up with the likes of Baltimore’s Lamar Jackson, Kansas City’s Patrick Mahomes and Buffalo’s Josh Allen if the quarterbacks take off running. It’s all about playing in space.

“If you watch successful teams, especially when they get into the playoffs, if you look at Tampa last year, they had no lack of speed or lack of range anywhere on defense,” Walls said. “The more you can add to the group, the better. It can never hurt you having faster, more versatile players who can play football, hunt the ball and make plays.”

Owusu-Koramoah is considered one of the big steals of the draft after the Butkus Award winner (nation’s top linebacker) and consensus All-American slid to No. 52. The playmaking scouting report fits Fields, as well.

“First off, he is explosive. He is rangy. He can get sideline to sideline,” Walls said. “As far as how he compares to Jeremiah, they both run. We want to have guys who can come on the field and take stress off of the first level and third level. They both do that.”

Fields began his career at Arizona before graduating and transferring to West Virginia for his final season. He said he flies to the ball, is an “ambassador of hard work” on the field and appreciates the Browns embracing change at his position.

“It is great. I am blessed,” he said. “Everybody called me undersized, but I do not think of myself like that, and I for sure do not play like that. I never will play like I am undersized.

“I love the fact that coaches are buying in. The whole league is eventually going to have to buy into these passing-coverage linebackers because the league is getting faster and it is becoming more and more of a passing game.”

When James Hudson got the news from his Michigan coaches he was switching to offensive line, he needed to study up fast. So he went to YouTube and typed in “Joe Thomas.”

Not a bad idea given that Thomas is expected to be a first-ballot Hall of Famer after playing left tackle with the Browns from 2007-17 and earning 10 straight Pro Bowl nods.

Hudson eventually transferred to Cincinnati and started the last 11 games for the Bearcats, helping him get drafted in the fourth round by Cleveland with the 110th pick. He continues to study Thomas and hopes he can meet his idol soon.

“It definitely excites me,” Hudson said of the prospect of Thomas reaching out to him. “He is probably one of the best offensive linemen to play the game so I just can’t wait to learn and soak up some things from him.”

Thomas still does work for the Browns and was eager to help left tackle Jedrick Wills, the No. 10 pick last year.

Cleveland starred as host of the draft, except for some less-than-ideal weather Thursday and Friday.

“I think it’s appropriate to start with a big thank you to the city of Cleveland and every one of the fans here,” Commissioner Roger Goodell said Saturday to kick off Day 3. “Over the first two days of the draft, 90,000 people attending this draft, the largest event since the pandemic started. Congratulations and thank you. And judging by that crowd out there, we expect to go over 150,000. Looks to me like it’s going to be pretty easy to do. So thank you, guys.”

Attendance was limited due to the pandemic, and Browns owner Dee Haslam said early in the week she’s hopeful the NFL will bring back the draft soon. Goodell seemed to be on the same page.

“We look forward to coming back,” he said at an event Friday.

University of Georgia safety Richard LeCounte III almost didn’t survive to become pick No. 169 in the fifth round. He suffered a concussion, a foot fracture and a shoulder injury in a traffic accident Oct. 31 after a game.

He was riding an off-road motorcycle, tried to avoid a car, slid and hit two cars, according to police. He spent two days in intensive care, his mom told the Atlanta Journal-Constitution, and missed the last five games.

He was productive in 44 games at Georgia, totaling 176 tackles, eight interceptions, 18 passes defensed, four forced fumbles and 6.5 tackles for loss.

The personnel staff referred to many of the selections Saturday as versatile. UCLA’s Demetric Felton embodies the description.

The redshirt senior started as a wide receiver with the Bruins but was shifted to running back for his junior and senior seasons. He said the UCLA staff asked him to make the switch when Joshua Kelley — a running back with the Chargers — suffered a knee injury in fall camp.

Felton ran with the opportunity, totaling 2,258 all-purpose yards the last two years and setting a school record with four touchdowns of 75 yards or more in 2019 — a 75-yard reception, a 75-yard run, a 94-yard reception and a 100-yard kickoff return. He’ll likely help out on special teams, too, after averaging 23.5 yards per return.

“I don’t really have a preference because I feel like I can play both positions at a very high level,” Felton said.  “But the Browns told me that they want me to play running back. I’m excited to be able to go there and learn from the guys above me and be able to provide for the team however they want me to.”

The Browns didn’t draft a defensive end, which qualified as a surprise given the second and third guys on the depth chart, Jadeveon Clowney Takk McKinley, are on one-year contracts. Berry said the lack of a new edge rusher was a combination of how the draft fell and how they feel about young ends Curtis Weaver and Porter Gustin. Weaver didn’t play as a rookie last year because of a toe injury but had 34 sacks in three seasons at Boise State.

“We like our group,” general manager Andrew Berry said.

** LeCounte said he’s friends with running back Nick Chubb from their days together at Georgia. LeCounte said Chubb took him under his wing.

“Oh, yeah, for sure,” he said. “I was just a knucklehead coming out of high school so he had to. He saw the potential in me, and he helped me.”

** The Browns will hold in-person rookie minicamp May 14-16 in Berea.

Chris Sweeney contributed to this report

Notes: Greg Newsome II set to fulfill promise to mom, graduate this quarter after only 3 seasons at Northwestern
Notes: GM Andrew Berry reiterates Jeremiah Owusu-Koramoah is “completely healthy” during interview on 92.3 The Fan