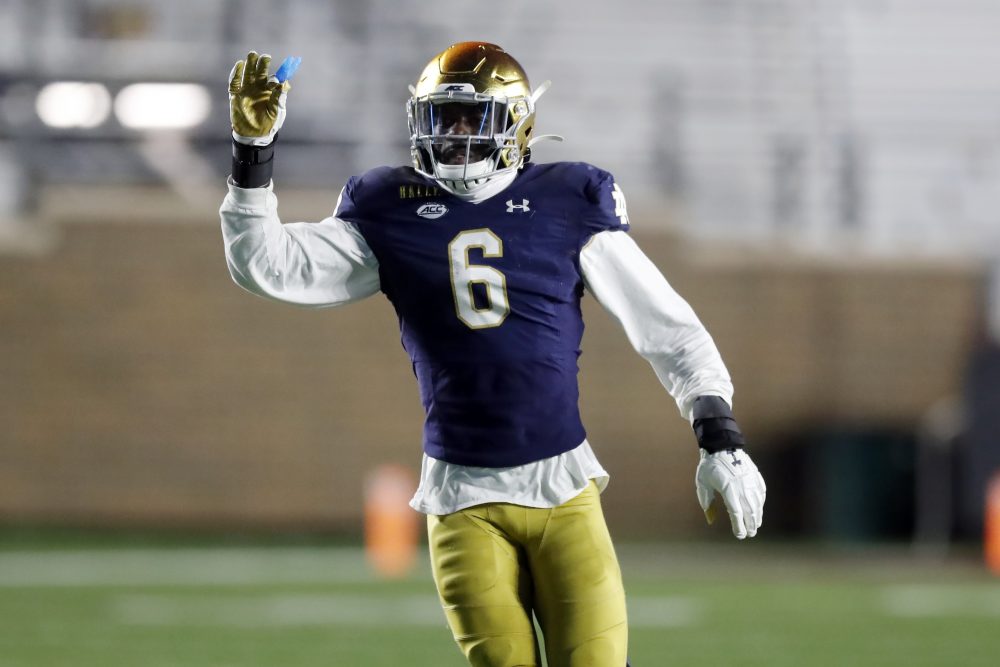 The Browns were ecstatic when Notre Dame linebacker Jeremiah Owusu-Koramoah slid toward them Friday in the second round of the NFL Draft. They traded up seven spots and selected him at No. 52.

One of the reported reasons he was still available was a medical question that eventually was answered. The Browns aren’t concerned.

“I wouldn’t go into any player’s specific medicals. But with Jeremiah, he’s completely healthy,” general manager Andrew Berry said Tuesday morning on “The Ken Carman Show with Anthony Lima” on 92.3 The Fan. “There’s really nothing in his background that would suggest that he can’t have a nice, long career.”

That’s consistent with what Berry said after the pick of Owusu-Koramoah.

“I can’t begin to speculate in terms of what made him, I guess, allegedly drop, but I can say that we were very comfortable with him from a medical standpoint,” he said Friday.

“Jeremiah Owusu-Koramoah had a heart issue that came up late in the process and was a concern for most teams, which is why he fell out of the first round and to pick No. 52 with Cleveland, per sources,” he tweeted. “Doctors ultimately cleared Owusu-Koramoah but it did contribute to him falling.”

“You get a lot of news within the draft and the process,” Owusu-Koramoah said. “There was something that came up in terms of what guys were saying, but in terms of me, in terms of the personal aspect, there was no really heart issues at all.

“We went back to Notre Dame. We looked at the medical records and everything. I never really had any heart issues or anything going on there. You hear a lot of things, but you’ve got to get it from the source.”

Owusu-Koramoah was projected to be a first-round pick, and chief strategy officer Paul DePodesta said the Browns would’ve considered him with the No. 26 pick if Northwestern cornerback Greg Newsome II hadn’t been available.

After the Browns grabbed Owusu-Koramoah, Berry and DePodesta were asked if medical concerns were the reason he wasn’t picked earlier.

“No, he did not run a 40 at his pro day and we knew he was sort of a little dinged up, but he participated otherwise in his pro day,” DePodesta said. “No, there is nothing that would prohibit him going forward with us.”

The Browns, who have a stacked roster, signed fewer undrafted rookies than in years past. The group of five announced Monday does include an interesting name: Florida State defensive tackle Marvis Wilson (6-foot-4, 303 pounds).

NFL Network reported the Browns gave Wilson a $30,000 signing bonus and $162,000 in guaranteed salary to win a bidding war.

Charlotte running back Tre Harbison and defensive end Romeo McKnight, Miami of Ohio cornerback Emmanuel Rugamba and Kansas State cornerback Kiondre Thomas were the other undrafted rookies signed. They all transferred during their careers.

NFL Draft Notes: Browns go smaller, faster at linebacker with Jeremiah Owusu-Koramoah and Tony Fields II
Notes: Myles Garrett “not at all” worried Browns are falling behind Chiefs because of smaller attendance at OTAs