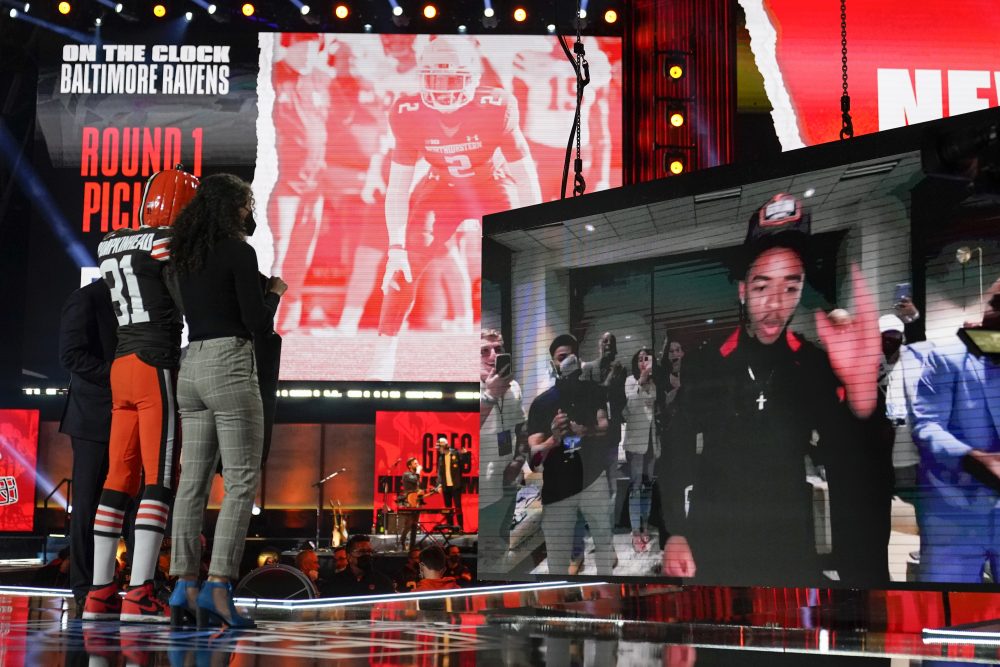 The clothes don’t always make the man. Sometimes the man makes the clothes into a billboard for causes bigger than himself.

Northwestern cornerback Greg Newsome II wore a dark suit to his NFL Draft party at a fitness center in suburban Chicago. What made the wardrobe choice more than a fashion statement were the messages in bright red letters across the back and down the sleeves.

“Black Lives Matter” and “Say Their Names” adorned the back. “Stop Asian Hate” filled the right sleeve, and “Women Can Ball Too” was on the left sleeve.

“Where people are not getting treated (equally) just because of how they look, that is just obviously not OK at all,” Newsome said April 30 on a Zoom call during his visit to Browns headquarters the day after he was drafted with the No. 26 pick. “I am just trying to get the message out and just trying to be somebody that people that are getting marginalized and things like that, they know that at least Greg Newsome is going to be somebody that is going to push for them and trying to get them equality.”


Northwestern associate head coach and defensive backs coach Matt MacPherson wasn’t surprised Newsome used his enormous platform as a first-round pick — the draft had an average audience of 6.1 million viewers — to bring attention to others.

Newsome’s passion for others spreads into many areas. He’s a self-proclaimed “super fan” of women’s sports, attending Northwestern basketball and lacrosse games, even during his preparation for the draft.

His girlfriend, Veronica Burton, is an All-Big Ten basketball guard and was named the conference’s Defensive Player of the Year the last two seasons.

“I am just big in the community. That is just something that I have been my whole life,” Newsome said. “Starting with the ‘Women Can Ball Too,’ my girlfriend and my sisters have all played basketball their whole lives. I am one of the biggest super fans you will meet. I will be at all the games.

“I just feel as if women do not get the same equality as men in the world, and I think that should change. Just because women are not the same athletes and can’t dunk the basketball does not mean their game is not great and does not mean they do not deserve the same recognition. I am just trying to preach that to everybody and trying to start the trend upward for that for women just to get equality around the world.”

Browns general manager Andrew Berry and coach Kevin Stefanski talk often about bringing the right type of person into the locker room as they’ve tried to strengthen a culture that was broken for too long. Newsome fits.

“It says he has a lot of thoughtfulness for other people and that he is unselfish, that he’s a good person,” MacPherson said of Newsome’s draft night wardrobe. “I always say this, if Greg Newsome never played a down of football and my kids turned out to be like Greg Newsome, I’d be a happy father. With him off the field, he’s as good as it gets. First and foremost, you’re going to get a good person.”

MacPherson also knows a lot about Newsome (6-foot, 192 pounds) as a player after spending three years together in Evanston, Ill.

He had 71 tackles, 25 passes defended and an interception in 21 games. He led the Big Ten with 10 passes defended in six games in 2020 and didn’t allow a touchdown, earning first-team all-conference honors. On throws downfield of at least 10 yards, Newsome allowed one catch on 15 targets with an interception, according to Pro Football Focus. He also allowed a 0.0 passer rating on third and fourth down in 2020.

Newsome’s length, 4.38-second speed in the 40-yard dash, nimble feet, smooth hips and quick reactions made him attractive to the Browns. MacPherson named something else when asked what he likes best about Newsome on the field.

“I would have to say it’s got to be he’s a competitor,” MacPherson said. “When he steps in between those lines, everything is important. At the college level, there’s going to be times where he’s going up against the best we have offensively and there’s times he’s going up against scout guys. And it doesn’t matter. He doesn’t let the competition determine the way that he plays, that he goes about his business.”

Newsome missed time in each of his three seasons due to injuries. He suffered a high ankle sprain as a freshman when he jumped to contest a ball and came down on the receiver’s foot, broke a collarbone diving to make a tackle as a sophomore and missed time with a groin injury last year when MacPherson was cautious with him.

“I understand the concern, but I think when you put them in the context it’s a lot less of a deal than people made it out to be,” MacPherson said.

Newsome turns 21 on Tuesday, and the Browns believe he’ll get stronger and more durable as his body finishes developing.

“Our medical staff and our orthopedic staff were very comfortable with it,” Berry said of the medical history. “Look, he was a little bit banged up, but this is also a guy who started since his true freshman year. Quite honestly, he is 20 years old on draft day so he is still really kind of growing into his body and growing into his frame.”

Newsome didn’t need long to start to feel at home in Cleveland and fill out his closet. He wore a throwback Jim Brown jersey to a Cavaliers game and was given a Collin Sexton No. 2 jersey by the team as he watched.

The super fan quickly realized how welcoming and passionate Browns fans can be.

“Before I got drafted to Cleveland, I always knew that the Dawg Pound was it, but after I got drafted I see the support from the fans is just amazing, honestly,” Newsome said. “I am honestly ready right now. I wish we could play a game right now and have all the fans there and they can support me and support this team. I am so ready to give it my all for these fans.”