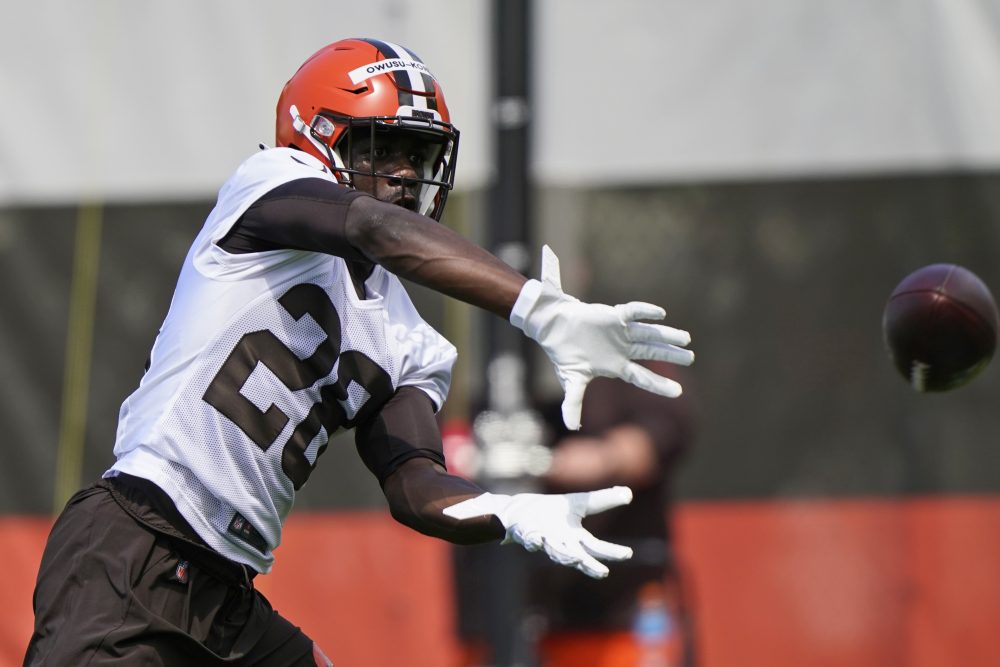 “He exerts more power at the point of attack than anyone I’ve seen, in terms of strength per pound,” said new Vanderbilt coach Clark Lea, who was Owusu-Koramoah’s defensive coordinator at Notre Dame. “If you saw him in our weight room and watched him move weight and talk to our strength coach about him, his power output was incredible.”

The Browns were overjoyed when they were able to get Owusu-Koramoah with the No. 52 pick in the NFL Draft. They traded with the Carolina Panthers to move up seven spots to guarantee they could land him after he was in the discussion when they picked at No. 26 in the first round.

The Browns embraced Owusu-Koramoah’s speed and playmaking ability, but his lack of ideal size for a linebacker scared some teams. He’s 6-foot-1½, 221 pounds.

Lea said the skills that earned Owusu-Koramoah All-American status and the Butkus Award as the nation’s top linebacker will translate to the NFL. Dimensions be damned.

“It’s still becoming a spatial game like you see in college,” Lea told The Chronicle-Telegram in a recent phone interview. “He can cover ground, he can make plays in space, he’s got strength at the point of attack. This guy’s a blitzer, then he’s got coverage skills, too. And all of that is validated on his film, where he’s got as productive a tape as anyone I’ve coached.

“The place that they took him, that’s a huge get. And the fact that he was available was shocking to me.”

General manager Andrew Berry and Owusu-Koramoah have repeatedly dismissed a heart issue that ESPN reported was cleared by doctors but contributed to the draft slide. Lea couldn’t speak to the medical but had a theory on the later-than-expected availability for the Browns.

“He’s a true hybrid player,” Lea said, referring to linebacker and strong safety. “Sometimes I feel like if you have an entrenched thought process on what a linebacker looks like, or if you’re very system-driven, you might be kinda turned off or you might be confused as to how to use the things that make him unique. It’s exciting to some and probably discomforting to others.”

The Browns defense ranked 23rd on third down in 2020, allowing 43.9 percent to be converted. They were 31st on fourth down, allowing an 81.5 percent conversion rate. Owusu-Koramoah will be counted on to make a difference, along with free agent signings John Johnson III, Troy Hill, Jadeveon Clowney and Takk McKinley.

“He has as good a playmaking instincts as I’ve ever coached,” Lea said. “As a defensive coordinator, you just get excited about the possibilities. It’s fun to coach him. He’s just got so many things he can do for you.

“I don’t know the Browns system, but I know that he’ll be a fit because they’ll be able to do a lot with him.”

Berry called Owusu-Koramoah the perfect fit to play weakside linebacker in coordinator Joe Woods’ scheme. He can run from sideline to sideline, cover tight ends and perhaps serve as a spy for Ravens quarterback Lamar Jackson.

And for those with doubts, the Browns agree Owusu-Koramoah and fifth-round linebacker Tony Fields II (6-0, 222) are physical enough to handle reps in the box with all the big bodies.

“We are going to be violent and explosive,” national scout Charles Walls said. “When you watch these guys, I do not think anyone would call them finesse players just because they have range, they do take off, they do hit and they seek that contact.”

Owusu-Koramoah has the necessary mindset, answering “tackling” when asked what he loves most on the field.

Berry and coach Kevin Stefanski had to smile when Owusu-Koramoah dropped their “smart, tough, accountable” mantra when talking about culture. Lea said he has a “unique take” on life.

“He’s true to himself,” Lea said. “He’s spirited, has fun in everything that he does. His teammates gravitate to him. He is anchored to his spirituality. His religion is very important to him.”

When Lea congratulated “Wu” on Twitter for being drafted, he complimented him for working through adversity. He wasn’t only talking about a foot injury that cost him nearly all of the 2018 season after he had redshirted as a freshman in 2017.

“He became a Notre Dame graduate, he became an elite-level player, an All-American, he became a Butkus Award winner,” Lea said. “On that journey, before he was able to find any of that stuff on the field, he had to locate himself off the field and do it in an environment that was very demanding and very structured. That’s a challenge. You have to really, really have a strength and confidence and bet on yourself.”

That will serve him well in the NFL.

The slide to the second round would cause some to stew over the slight, building a giant chip on their shoulder. Owusu-Koramoah takes a different approach.

“My motivation lies strictly within the game of football and my appreciation for football,” he said. “I am not going to use something that is external in terms of a draft and people not picking me.”