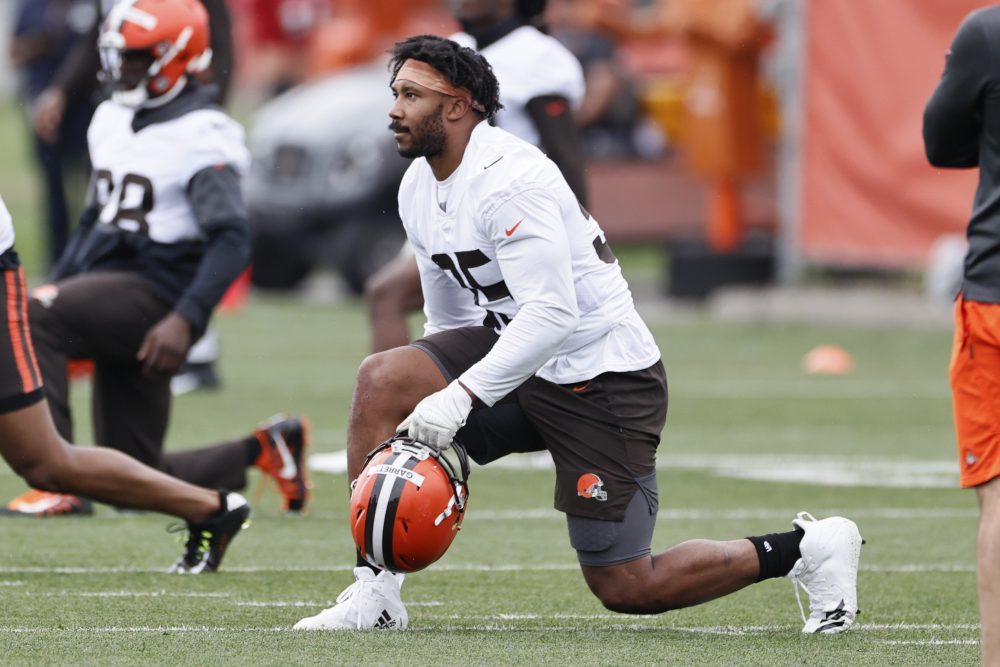 BEREA — Myles Garrett didn’t try to hide the disappointment. He dropped his head as soon as he realized where the question was headed.

He missed two games in November last season after testing positive for COVID-19 and felt the effects of the disease during the final five regular-season games and pair of playoff games. His production dropped, and while he still earned first-team All-Pro honors, it derailed his chances to be named NFL Defensive Player of the Year — a primary goal.

“Sure did. Sure did. It hurt, too,” Garrett said Wednesday after an organized team activities practice. “I didn’t feel like I was getting off the ball. Athletically, I felt like I had it. Conditioning-wise, I felt like I was 50 percent. I don’t think I’ve ever had to use oxygen so frequently so early into a game.”

“Once you get tired, you start losing the play, so you’re trying to think of what you’re supposed to do here,” Garrett said. “If you’re thinking what you’re supposed to do here, you can’t think about the alternatives or the options off that, the pass-rush moves or the rip or release for run blocks. Once you’re thinking about just trying to remember the play, you’re not thinking about running calls. Things start to slip. All this stuff starts to weigh on you.

“So I’m just trying to get my conditioning back, and I’m fighting through that when I get into games and to practices. I think I had it like a quarter, maybe a quarter and a half, and then I was honestly emptying the tank. I don’t think I’ve ever felt like that. I hope nothing like that happens to me or anyone else.”

Garrett said the lingering effects from COVID are finally gone.

“I feel great. I feel the best that I have since last year before COVID,” he said. “It’s a wonderful feeling. I feel like it was kind of a long road and now that I’m back I’m feeling well-conditioned and feeling back on my feet, the world’s ahead of me.”

Garrett said his struggles were likely worsened because he has asthma. Defensive tackle Andrew Billings has asthma and opted out of last season after signing a one-year, $3.5 million contract. He’s back this year and lined up next to Garrett on Wednesday.

“Yeah I don’t blame him for doing it,” Garrett said of the opt-out. “I have asthma as well, and that’s probably why it hit me so hard. So just going into it, I feel like we have the vaccine, we have another year of protocols to keep our players, our staff safe. Now I feel like it’s just up to us to get the job and the work done.”

Garrett was the marquee player at OTAs the last two days. He said it’s important for a defense with a lot of new faces to spend time together during the offseason.

“Really the D-line and kind of as a defense, we decided we needed to be there to work with the younger guys, get some work in with the coaches and for everyone to get on the bags, work on the technique, get on some cleats and a helmet, I know it’s been awhile for some of these guys,” he said. “So just being able to do that, work on your craft a little bit and work on the plays so it flows a little bit more seamless than if we were to take such a long, extended break from each other and not know each other’s tendencies and know how we are on the field.”

With Garrett back inside team headquarters, coach Kevin Stefanski used the opportunity to put a stop to his pickup basketball career. Garrett played a lot of hoops during the offseason, posting videos of ferocious dunks and long 3-pointers.

“He retired, so congratulations on a great career for Myles, really proud of him, but he is done,” Stefanski said.

He had to be worried Garrett would get hurt on the hardwood.

“I feel like it’s more of a (Michael) Jordan retirement,” Garrett said. “He went to baseball for a second/I went to basketball for a second, now I have to go back to what I’m good at, what I usually do, playing football, rushing the passer, stopping the run. Next season, you never know. I might go back to basketball, I might go play baseball, see if I can get on a team. There’s more on the horizon, but right now I have to get back to what my main focus is.”

He left the court in style.

“I think that last dunk was either a reverse, a double-pump or a windmill, so I had to go out with a bang,” he said.

The Browns could have as many as nine new starters on defense after general manager Andrew Berry spent the offseason adding talent at every level. The wholesale changes were a key reason many of the defenders chose to attend OTAs while the offensive starters have stayed away.

“I think it will come together quicker than most people anticipate,” Garrett said of the defense. “I like who we have on defense. There are a lot of guys who have played some good football that we have added to our roster, so I won’t be surprised if they come in here and start making plays immediately, just because that is what they have been doing. Our defense is not absolutely exotic. They come in, they are smart and they are quick as a whip, and they will be able to catch on and follow suit.”

He considers it his job to see that it happens.

“I just have to make sure they fall in line,” Garrett said. “We have a good thing going. Whether you are coming here from another team or are older or younger, we are all held to that same standard, and that will lead to success. We hold each other accountable and I hold them accountable and try to get them to work as hard as me, and if they catch me when I am stumbling or I am falling, I think we will be successful.”

“It is no secret that Myles is a leader of this football team and a leader of this defense,” Stefanski said. “To see him out there with his teammates, going through the drills and that type of thing is great.”

The chiseled Garrett wouldn’t say how much bigger he got in another offseason filled with intense and impressive workouts.

“I think it is going to pay off big-time, but I do not think I lost any speed,” he said.

“Freak of nature, honestly. Huge human being,” he said. “Probably the most flexible big guy I have ever seen as far as the stuff that I have seen him do in the weight room. Strong. All of that stuff.”