Notes: Myles Garrett “not at all” worried Browns are falling behind Chiefs because of smaller attendance at OTAs 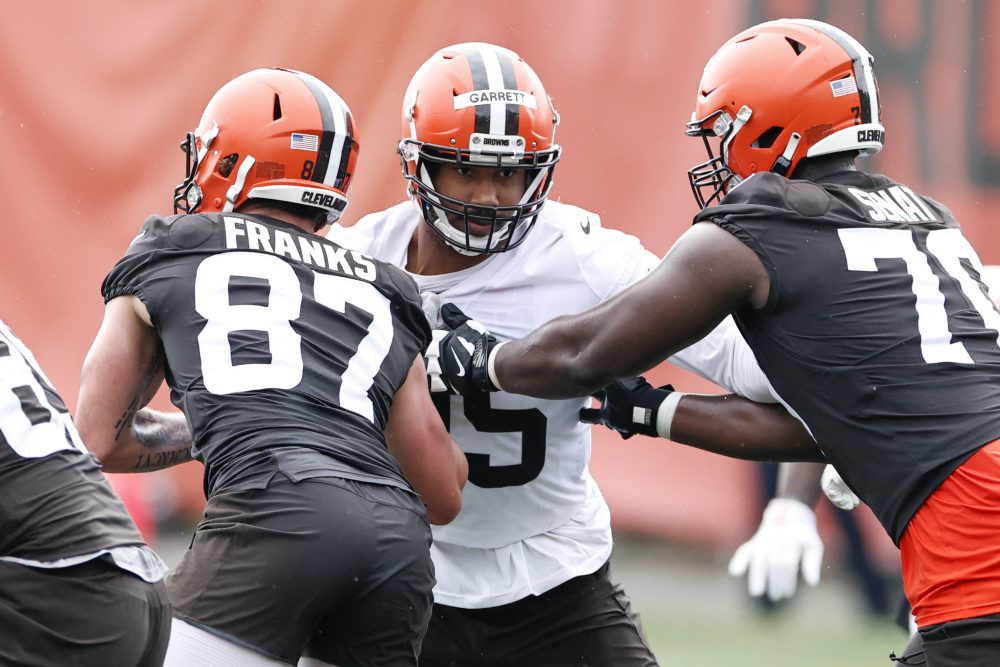 BEREA — The last time the Browns took the field as a complete team, they lost 22-17 to the Kansas City Chiefs in the divisional round of the playoffs. The Browns will return to Arrowhead on Sept. 12 to kick off a season loaded with expectations.

All-Pro defensive end Myles Garrett was, and isn’t worried they’re falling further behind the Chiefs, who won the Super Bowl after the 2019 season and lost the Super Bowl in February.

“Not at all,” Garrett said. “I’m glad they have attendance, but just because they’re getting work at their facility doesn’t mean we’re not working just because we’re away.

“Our defense is getting work, our guys (on offense) are working on their craft, just from home. We have that freedom and liberty. When we get to Game 1, we’ll see who has been jelling better and who has the upper hand.”

Fifty-five players on the Browns’ 90-man roster were on the field Wednesday, with a significant defensive contingent led by Garrett. Cornerback Denzel Ward, linebacker Anthony Walker and tackles Malik Jackson and Andrew Billings were among the expected starters to participate.

Coach Kevin Stefanski repeatedly reminded reporters the offseason program is voluntary until the mandatory minicamp June 15-17. He said he’s had a lot of conversations with many players about the offseason schedule.

“This is a voluntary program. We mean that,” he said. “If they choose to come here, we want to make sure it is a safe place for them to get instruction from their coaches.”

Center and NFLPA president JC Tretter has been adamant about the need for the offseason program to be restructured, citing a decrease in injuries a year ago when the entire offseason was virtual due to the pandemic. The Browns players, as well as those on several other teams, released a statement in April saying they’d skip workouts at team facilities.

Stefanski said Tretter’s role with the NFLPA and outspokenness on the topic doesn’t make the situation more difficult to navigate.

“No. I understand the dynamic completely,” he said.

Garrett and Walker said the players are comfortable with each individual’s decision to practice with the team or work out on his own.

The defense was overhauled in the offseason, with nine new starters possible, so many of the defenders thought getting together with the coaches would be beneficial. The offense is more established, with the entire starting lineup expected to return, and groups of players have worked out together away from the facility.

Stefanski said the coaches aren’t taking attendance and they’ll adjust practice depending on the number of players. His focus is teaching the guys on the field.

The team continues to hold virtual meetings, which Stefanski said have received “very good” attendance. He’s not paying attention to what the Chiefs are doing in the spring.

“I’d tell you I’m concerned about the Cleveland Browns every day,” he said. “I worry about us. I know what we have to accomplish today, I know the work that had to be put in today, and that’s what I’m focused on.”

Delpit missed all of his rookie season in 2020 with a ruptured Achilles tendon and said last week he’s on track to be 100 percent for the start of training camp in late July. Natson suffered a torn anterior cruciate ligament in Week 3 last year. Fields suffered a foot injury before rookie minicamp and is in a walking boot.

Schwartz’s left leg was in a sleeve, but Stefanski said he’s fine. The speedster was a third-round pick out of Auburn.

McDowell practiced in rookie minicamp last month but not Wednesday with an unknown injury. The second-round pick of the Seahawks in 2017 has never taken an NFL snap, dealing with injuries and off-field trouble that landed him in prison.

The Browns vetted him and signed him last month.

“He is doing a great job,” Stefanski said. “Really pleased with how he is attacking things in the weight room, the meeting room and out on the field.”

“He seems bright,” Garrett said. “He seems very attentive to what we are doing. He likes to ask questions to Coach to make sure that when he gets back he will be ready to play, so I like that about him already. I am hopeful for the guy. I am hopeful for what he can do for us.”

Rookie sixth-round pick Demetric Felton is listed as a running back but went through receiver drills to open practice. After dropping a couple of passes in individual drills, he made a couple of nice grabs in team work.

“Versatility is a big deal,” Stefanski said. “Demetric played running back and wide receiver previously in college. He has done both with us already. He has been in both meetings. There have been times he is a running back for that day and a wide receiver the next day.

“It does speak to his versatility. It speaks to his ability to mentally handle that.”