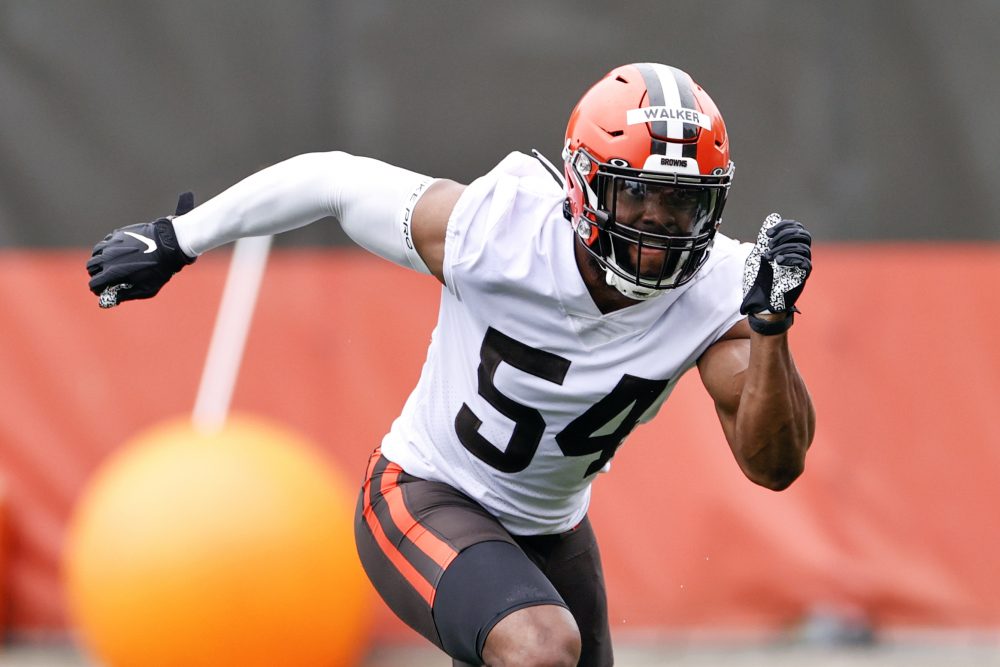 More than a month before the NFL Draft, Anthony Walker Jr. had a feeling fellow Northwestern University alumnus Greg Newsome II would follow him to the Browns defense. Walker had just signed a one-year, $3 million deal in free agency to become Cleveland’s middle linebacker and received a congratulatory text from Newsome, the All-Big Ten cornerback.

“In my head, I was like he has a pretty good shot of getting drafted by the Browns,” Walker said Wednesday after an organized team activities practice. “I knew where we were picking. I told him, ‘Man, I think you are going to be joining me here.’

“Then the day came and I texted him that morning, ‘Cleveland.’ He was like, ‘I think so, too.’ Then time goes and he is here now.”

Walker was a fifth-round draft pick of the Colts in 2017 and Newsome didn’t start at Northwestern until 2018, but they shared the Wildcats connection and formed a bond. It will only grow stronger after Newsome was the Browns’ pick at No. 26.

“That is a guy I talk to all the time,” Newsome said of Walker the day after being drafted. “That is like my big brother. He told me before the draft, ‘Hey, bro, you are going to Cleveland.’”

Newsome has been in town since rookie minicamp in mid-May. Walker joined him for OTAs this week.

“Definitely excited for him,” Walker said. “He has earned this opportunity to be playing the game at the highest level. He has earned that through his play in college.

“I saw him dominate and play with a lot of swag and a lot of confidence. I thought he was probably one of the best defensive backs to come through Northwestern, if not the best. Definitely proud of him. It is going to be hard to catch a ball on him, I will say that.”

Walker offered his counsel while Newsome was in school.

“Anything I need I text him. If I need any advice, I text him,” Newsome said. “I feel like at Northwestern, it just shows you the type of brotherhood that we have.”

Walker, 25, will also be instrumental in the development of rookie linebacker Jeremiah Owusu-Koramoah, who was drafted out of Notre Dame at No. 52 in the second round after a trade up. Walker and Owusu-Koramoah could be the linebackers on the field in the nickel package.

“Elite athlete as far as explosiveness, quickness, speed, instincts and all of that stuff. He has it — all of the tools,” Walker said. “Now it is about transitioning the game to the NFL level as a linebacker. We all struggle with it coming in from college and now you are seeing pro-style offense and understanding different route concepts and all of that stuff.

“He is getting better each day. He made a play today that he probably would not have made two weeks ago.”

Walker spent three years in Indianapolis alongside linebacker Darius Leonard — Defensive Rookie of the Year in 2018 and a two-time All-Pro who was heartbroken when Walker signed with the Browns. Walker said Owusu-Koramoah reminds him of Leonard.

“Just a guy learning how to really understand the game of linebacker rather than just run and hitting,” Walker said. “Everybody loves to run and hit as a linebacker, but the NFL game is a little different. You have to start piecing things together and open up your vision a little bit more. He is getting better. He will piece it all together. I have no doubt in my mind that he will be a great player in this league.”

Walker had no doubts about reporting for the voluntary OTAs this week, even though the starting offense and some key defensive players exercised their right not to attend the practices. He’s part of a defensive makeover that could see 12 players who didn’t play for the Browns last year in the rotation.

“First year in a new system, getting some new terminology and some new communication, which is huge as the MIKE linebacker,” he said. “Getting that communication, getting that comfortability with the team and everybody, I think that is huge for my job description and a huge step in the right direction. Me being here was pretty much a no-brainer.”

“We talk all the time every day, pretty much all of the guys and all of the leaders,” Walker said. “We understand what is at stake and what we have to get done and get accomplished this year.

“Everybody is working to get better, whether that is here or wherever they are training. We are all working toward the same goal.”

Coach Kevin Stefanski was grateful Walker was on the field.

“I am glad you asked about him,” he said. “I would say (he is) as advertised. You are playing that MIKE linebacker position, you are directing traffic, you are getting everybody lined up and you in a lot of ways are the quarterback of the defense. To see him communicate and to see his leadership on display in these types of settings is very impressive.

Walker is using OTAs to learn the fundamentals of the defense and brush up on his playing fundamentals.

“It is a new start. You feel like a rookie, I think, as you learn the guys,” he said. “You relish that opportunity to meet some new guys, play with a new group and try to take your game to the next level. You still have that same hunger and that same drive to be the best and to be a part of a special team and a special defense. That is my goal here.”

Mailbag: Who will make the roster? Who gets an extension first? What will the record be?

Myles Garrett was “hurt” that battle with COVID-19 last season wrecked his chances to be Defensive Player of the Year
Former OL Anthony Fabiano hired as scouting assistant, as several additions, promotions announced