Greedy Williams feeling like himself after missed season, still must develop trust in shoulder when it comes to hitting 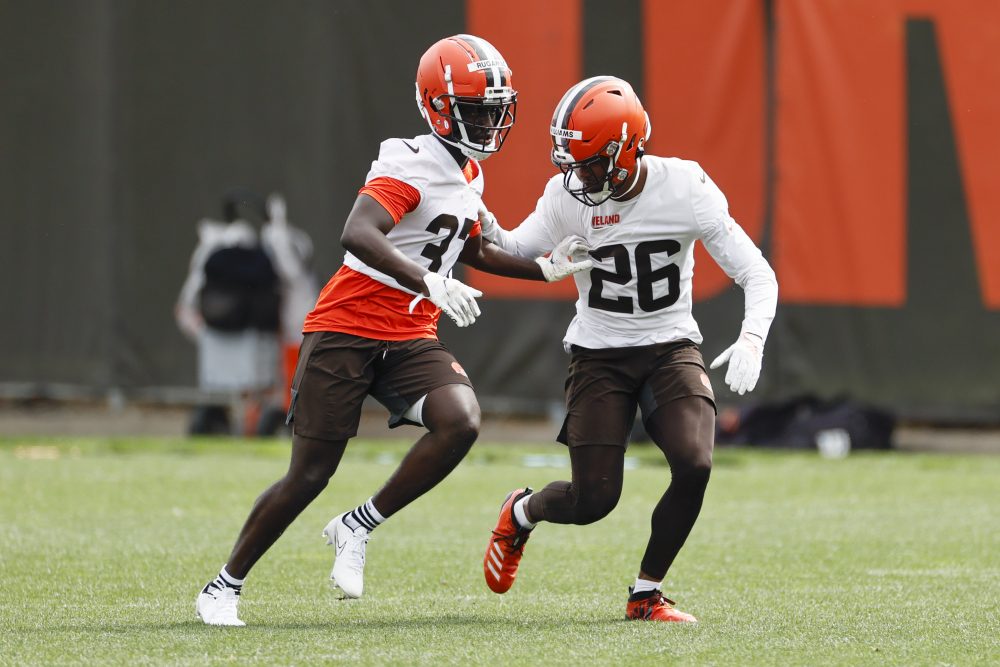 BEREA — Cornerback Greedy Williams went through the full, albeit light, organized team activities practice Wednesday. After missing all of last season with a nerve injury in his right shoulder, he was grateful to be back where he belongs.

“It’s a great feeling,” Williams said. “Just being reunited with the team, going through the drills with them and things like that, it gives you the happiest moments.”

“He has some more work to do, but to see him back on the field and see No. 26 working is great,” he said.

Williams, the No. 46 pick in 2019, ran, backpedaled and covered. The next hurdle is hitting.

He injured the shoulder Aug. 24 in training camp making a tackle and never returned. Because of the nature of the injury, he won’t be completely cleared until he passes contact and strength tests.

“Just trusting the shoulder again in hitting and things like that,” he said. “Basically, just working around the contact and getting used to it again.

“Right now, I am just going through the strengthening phase, getting the strength back into the shoulder. Whatever they have for me next, that is a question for the medical guys.”

After a three-day mandatory minicamp next week, the players are off until training camp in late July. Williams hopes to be back to normal.

“That is the goal,” he said. “Working towards getting back out there, being 100 percent and being myself again.”

He continues to rehab the shoulder in which he suffered damage to the axillary nerve, which affects the muscles. For months the nerve wouldn’t allow the muscles to fire.

“Trusting my people and trusting the guys here just to keep rehabbing and working up to the part where I trust it again,” he said. “Just having a strong team behind me, and we are pushing it every day to get better and get back out there.”

Williams started 12 games as a rookie, missing four with a hamstring injury. He had no interceptions, two passes defensed, 47 tackles and two tackles for loss.

He was slated to start again last season and planned to make a Year 2 jump when the confusing injury happened. The Browns first listed him as day to day, but the nerve took months to show improvement.

He returns to find himself in a competition for a starting job with rookie Greg Newsome II, the No. 26 pick. Williams understood the selection because the secondary suffered from a lack of quality depth last year, and quickly reached out to Newsome.

“That is my teammate. You have to embrace these guys. You have to make everyone feel like family when they are new coming in.”

Competing for playing time doesn’t feel like a hardship after spending nine months working to return to the field.

“The rehab process, it is a fight,” Williams said. “Dealing with a nerve injury, you fatigue kind of fast with a shoulder injury. I keep fighting through it and just keep trusting myself. I am just pushing it to the limit of being able to get back out there.”

He believes he’s preparing “10 times better” after being forced to watch and learn the game for a season.

Stefanski was impressed with how Williams handled the lost season and the long road back.

“It told me a ton about him. Like anybody going through an injury, he had some tough moments there, but when he was in this building, he had a smile on his face and he worked really hard in that training room,” Stefanski said. “I can tell you, we are all really excited to see him out on the field going through drills. To watch somebody rehab like he did, we are excited about where he is going.”

Safety John Johnson III, who was the team’s signature addition in free agency, shared a field with Williams for the first time this week.

“He is a natural talent so if he really locks in on just getting better and working on the things that he does not do so well, which are not many things, just each rep each day one at a time, do not get ahead of yourself and just get 1 percent better each day, he will be a tremendous player for a long time,” Johnson said.

Williams had company and a familiar face in the training room last season. Safety Grant Delpit, a former LSU teammate and the No. 44 pick in the draft last year, missed his rookie season after his Achilles ruptured during the same practice Williams was hurt.

Delpit went through individual drills Wednesday and expects to be 100 percent for training camp.

“With me and him rehabbing together, we kept each other in high spirits,” Williams said. “I was always saying we are going to be back next year.

“He looks like he is ready to go. He has gotten bigger, faster. I ask him every day how his leg is feeling. He is giving me positive feedback, which I want to hear.”

Stefanski likes what he sees from the pair and plans to be careful as they take their final steps back to 100 percent.

“They are doing a great job,” he said. “We are going to be smart about it as we ramp them up through the next couple of weeks, and into training camp. They are hitting all of their benchmarks.”

Preseason dates and times announced: Only home game to start at 1 p.m.
John Johnson III believes coordinator Joe “Exotic” Woods has plenty up his sleeve, defense has talent to be NFL’s best