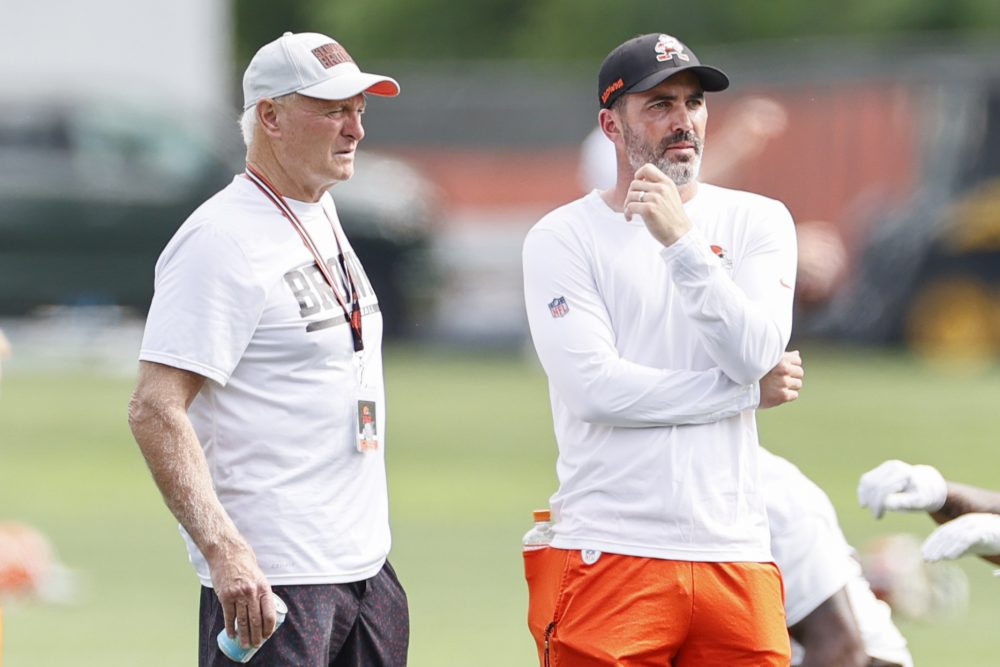 BEREA — The Browns will see a lot of the New York Giants this summer.

The Browns will hold two joint practices with the Giants in advance of their preseason game Sunday, Aug. 22, at FirstEnergy Stadium. The game is the second of three in the exhibition season.

“They will be coming to us to practice,” coach Kevin Stefanski said Wednesday after an organized team activities practice.

Kitchens went 6-10 in 2019 and was fired after one season in charge of the Browns. Stefanski was hired to replace him.

Kitchens was tight ends coach for the Giants last year and served as play caller during the Browns’ 20-6 win Dec. 20 in New Jersey because coordinator Jason Garrett was on the COVID-19 list.

Stefanski planned to practice against the Packers last year in Wisconsin, but the pandemic canceled the preseason.

“They are great. Over the years I have done them, and I think you can get a ton out of them,” he said of the joint sessions. “It certainly ramps up the intensity, but guys take care of each other and know that they are getting in good work ahead of a game. I just think it is a great time in a controlled environment to get really good work against different schemes than your own.”

The preseason was reduced to three games this year because of the addition of a 17th regular-season game. The preseason finale is Aug. 29 and will likely act as the traditional dress rehearsal in which the starters get their most playing time.

Stefanski said the organization is working “really hard” and educating players so they will get vaccinated against COVID-19. He said he didn’t know off the top of his head what percentage of players have gotten their shots.

The NFL recently changed protocols so that fully vaccinated players, coaches and staff don’t have to wear masks. They’re also subject to fewer virus tests and more relaxed protocols, which should benefit game preparation during the season.

“The way I look at it is it is something you are doing to help the greater good, so I will make sure that guys are taking care of themselves, their family, their community, etc.” Stefanski said. “You are right, there is a competitive advantage to this. We are just going to continue to educate the guys and work with them as such.”

While quarterback Baker Mayfield works out and hangs out with receivers, including Odell Beckham Jr., and tight ends this week in Austin, Texas, backup quarterback Case Keenum is attending the voluntary OTAs at team headquarters.

Keenum joined Kyle Lauletta, who was the only quarterback on the field last week.

“Case being here, he wanted to come in and get some work with the guys,” Stefanski said. “Excited to have all of these guys here and the guys who are out there working.

“As far as it relates to Baker and what is going on down there, my jurisdiction for the offseason program does not extend past Berea.”

Defensive end Myles Garrett, left tackle Jedrick Wills Jr. and defensive tackles Malik Jackson and Andrew Billings were among the players who weren’t in attendance Wednesday but had been during the OTAs.

Most of the key offensive players continue to work away from team headquarters.