John Johnson III believes coordinator Joe “Exotic” Woods has plenty up his sleeve, defense has talent to be NFL’s best 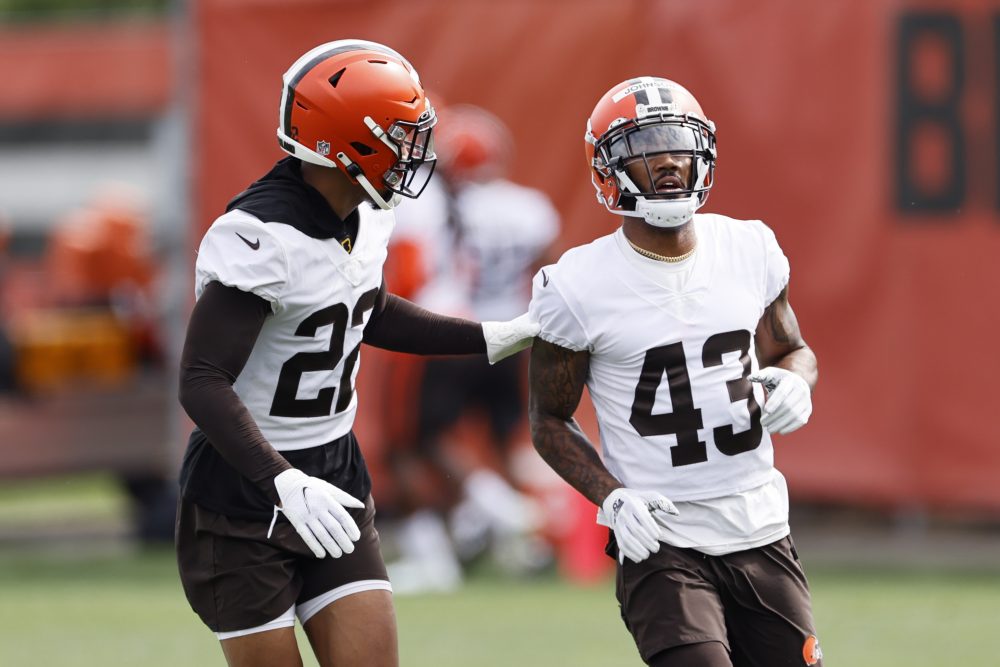 The way new safety John Johnson III envisions the rebuilt Browns defense, it would work as a nickname for coordinator Joe Woods.

While Johnson said it’s a little premature to tell exactly how Woods will use three-safety packages with Johnson, Grant Delpit and Ronnie Harrison Jr., he predicted variety and creativity.

“Once we get into game-planning, I think it will be different every week, honestly,” Johnson said Wednesday after an organized team activities practice. “We have three guys who can go and play and that you know can play, and it is easy to create schemes, create blitzes and create patterns and coverages that we can all play and match up against different people.

“I think during the season is when it will really take full effect. Right now, I think it is just moving around and playing different spots, not just the safeties but nickels, corners and dime linebackers just to see how well we move and stuff like that. During the season, it will probably get exotic.”

When Delpit’s Achilles ruptured in training camp last year, Woods was forced to abandon a large chunk of his playbook. He loves using three safeties, often with three cornerbacks in a dime package, but didn’t have the personnel to run his preferred schemes.

General manager Andrew Berry recognized this, listened to Woods and signed Johnson, 25, to a three-year, $33.75 million contract to open free agency. After drafting Delpit with the No. 44 pick out of LSU in 2020, the prioritization of safeties is obvious.

What remains a mystery is precisely how Woods will employ the trio.

Johnson (6-foot, 209 pounds) has started 48 games with eight interceptions, 32 passes defensed, eight tackles for loss and a forced fumble. In 16 starts in 2020 as a captain and the signal caller for the Rams, he had an interception, eight passes defensed, a team-high 105 tackles and two tackles for loss as he played every snap. He received Pro Football Focus’ third-highest grade, 85.3, among safeties.

Harrison, 24, joined the Browns from the Jaguars in a preseason trade last year following Delpit’s injury. Harrison (6-3, 214) started seven of 11 games with an interception returned for a touchdown, seven passes defensed, a sack, a fumble recovery and 38 tackles. In 29 starts and 39 games, he has four interceptions, 19 passes defensed, four sacks, two fumble recoveries and 141 tackles.

Greedy Williams feeling like himself after missed season, still must develop trust in shoulder when it comes to hitting

Delpit, 22, was a two-time consensus All-American and the Jim Thorpe Award winner as the nation’s top defensive back. In his last two years at LSU, Delpit (6-2, 213) had seven interceptions, seven sacks, 16 passes defensed, two forced fumbles and two fumble recoveries.

“First impression, extremely smart guys — intellectual, football IQ is very high and that is how I think I play,” Johnson said of Delpit and Harrison. “We will get along very well. Grant is coming back. I have heard nothing but great things. He is working hard to get back. He is moving around out there and looks good.”

“You have to attack the things that you thought you lacked in the past and the previous season,” Johnson said. “I know certain third downs and certain distances we were not so well at. Fourth down we had to get better. In the red zone, we had to get better. Bringing the guys in who you know can do it and you have seen them do it, especially like Clowney and Troy Hill, it is on tape.

“Bring guys in who you know can play and help a culture of a team, it is awesome.”

Johnson comes from a Rams team that ranked first in the NFL in defense and pass defense and believes the Browns have what it takes to ascend to the top.

“The No. 1 thing is the players. It has always been about the players,” he said. “Walking into this building, we have the players to do that and get to that level. It is really just going out there, practicing, becoming great at what we do and being technicians. I think the sky is the limit.”

Many of the projected starters have attended at least some of the OTAs over the last two weeks, but Clowney and McKinley haven’t, and the complete unit won’t be together until mandatory minicamp next week. With as many as nine new starters from a year ago, the defense will have to get comfortable together.

“I do not think it is a concern, but it is definitely something that you have to be proactive about,” Johnson said. “That is why a couple of the guys came this week to stay on top of things before minicamp, and then going into training camp we will be firing and more comfortable, and we can build that foundation so we can actually start working on this beautiful house that we are about to build.”

Coach Kevin Stefanski was glad to see Johnson get to work on the fields in Berea.

“John is new to the program, so I think he is really getting a lot out of it in terms of the communication, the calls and those type of things,” he said. “We are covering that on the Zoom calls, but I think there is value with him being around his teammates and all of those guys being around each other and making calls. They are doing a nice job.”

Cornerback Greedy Williams said Johnson is funny off the field but “all serious and business” on it. Johnson considers himself a vocal leader.

“The first day, I kind of was surveying, scanning and just feeling guys out,” he said. “I feel more comfortable now just talking and making my presence felt. It will come as we move along.

“Yeah, I think it is just natural and my personality. I love talking, talking trash and competing. I am just out there having fun, and it has paid off.”

Greedy Williams feeling like himself after missed season, still must develop trust in shoulder when it comes to hitting
Notes: Jarvis Landry says Odell Beckham Jr. already doing things that will “blow your mind” in comeback from torn ACL