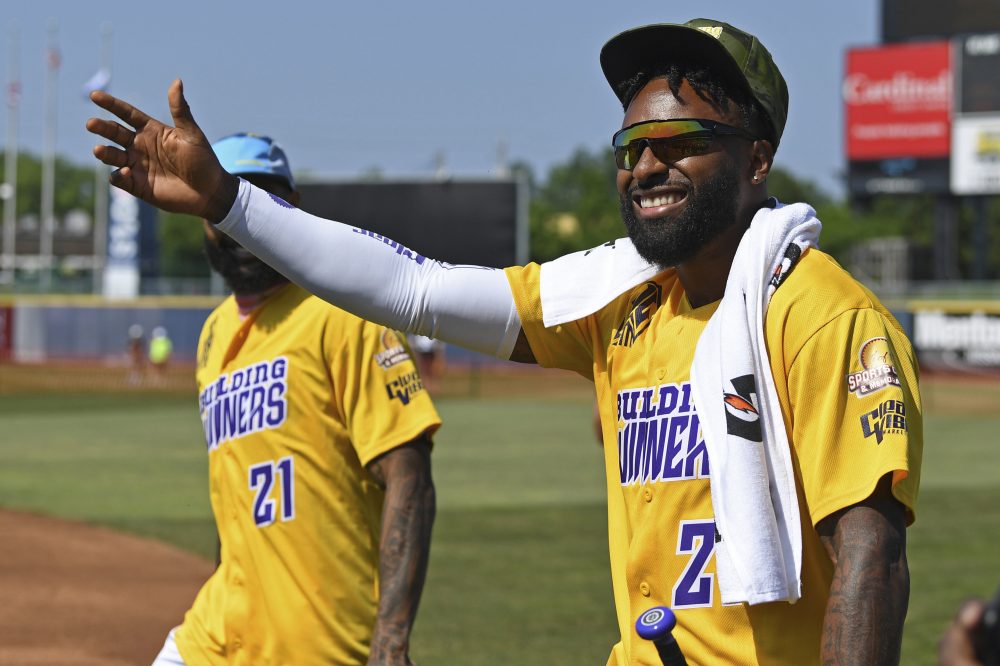 EASTLAKE — The Browns were one drive from upsetting the Kansas City Chiefs in January and keeping them from reaching a second straight Super Bowl.

Travis Kelce, the All-Pro tight end who has won a Super Bowl and lost a Super Bowl with the Kansas City Chiefs in the last two years, believes the gap is even closer in 2021.

“I think the Browns and Chiefs are definitely neck and neck for sure,” he said Saturday.

Kelce was a captain for the Jarvis Landry Celebrity Softball Game at Classic Park, the home of the Lake County Captains. He went to Cleveland Heights High School and grew up idolizing Bernie Kosar. 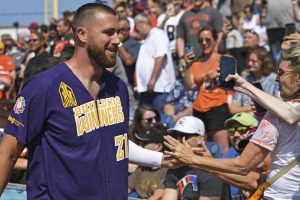 Kelce and the Chiefs bounced the Browns from the playoffs 22-17 in the divisional round in January. Cleveland had returned to the playoffs for the first time since the 2002 season and beat the Steelers in the wild card round for its first postseason victory since the 1994 season.

The Browns and Chiefs will open the season Sept. 12 at Arrowhead Stadium in Kansas City, Mo., and Kelce predicted another meeting in the playoffs.

“I would say they’re definitely a contender, without a doubt,” he said of the Browns. “It’s definitely there. Baker (Mayfield) and the gang have upped the ante, made this team an unbelievable team and a team you have to prepare for and take serious.

“I think that moving forward without a doubt I can see a lot more playoff games between us and I’ll just take it one day at a time and hope for it.”

The excitement was obvious exactly three months before the opener, as fans began tailgating eight hours before the home run derby that preceded the softball game. Browns jerseys were everywhere, and the lines stretched around the stadium in anticipation of the gates opening. The event that raised money for the Jarvis Landry Building Winners Foundation and the Lake Health Foundation was a sellout of 7,000.

“I don’t expect nothing less here in Cleveland,” Landry said.

The Browns’ run to the second round of the playoffs was a bit unexpected given Kevin Stefanski being in his first year as a head coach and all the difficulties of playing a season during the pandemic. But after an 11-5 record in the regular season, the playoff win, the close loss to the Chiefs and an overhaul of the defense this offseason, the expectations are extreme.

“Why not?” Landry said. “It’s something that people always say you should not talk about, but nobody trains or nobody does what they do to not be a champion.

#Browns QB Baker Mayfield with a bomb on his first swing in HR Derby. pic.twitter.com/UC0djCZ1Xb

Kelce caught eight passes for 109 yards and a touchdown in the playoff matchup. He’s taken note of Cleveland’s defensive reconstruction, much of which was intended to stop guys like him. Safety John Johnson III, defensive ends Jadeveon Clowney and Takkarist McKinley, linebacker Anthony Walker Jr., tackle Malik Jackson and nickelback Troy Hill were signed in free agency, and cornerback Greg Newsome II and linebacker Jeremiah Owusu-Koramoah were drafted with the first two picks.

“Oh, yeah, I think they got a big steal in the draft with the linebacker from Notre Dame,” Kelce said. “I think that they’ve always been able to get good players and develop them. I think that’s what you’ve seen Baker do. The leadership through that offense and through that defense, with Myles (Garrett), it’s impressive.

“And it’s impressive to see where they’ve come from and where they are now, because it’s a legit contender and every team’s going to have to bring it.”

The day connected the past to the present, as Kosar hung out with today’s players and threw the ceremonial first pitch to Mayfield — it was a strike. Kosar and Kelce hugged and expressed their mutual admiration.

The last time there was this kind of justified hype around the Browns was when Kosar led them to three AFC championship games in the late 1980s.

“So to have a beautiful day like today and have the virus somewhat in our rearview mirrors and have a beautiful ending to the 2020 season by beating the Steelers in a playoff game, if that doesn’t give us the impetus and excitement heading into the 2021 year,” Kosar said.

He gave his advice for sustaining the success.

“Look at all the players who are here today, this is a voluntary day. So many people could be out doing other things,” Kosar said. “But teammates genuinely want to stay here. They want to stay in Cleveland and not only help out the community but they want to help out their brothers on the team. And when you have that genuine love and respect within the team — which I know our team did in the ’80s and it resonates still — you can really see that within this team.”

Kelce, who wore an Indians hat and retro Manny Ramirez jersey, noted it’s a “weird feeling” being at home but in “enemy territory.” He loves that Browns fans are so pumped, and have good reason to be.

“I’ve always had a special spot in my heart for the Browns,” he said. “It’s an awesome atmosphere, the sports town is like none other, man. Cleveland, I grew up in it, I am a part of this sports town, whether people want to believe it or not. I bleed everything in 216.

“I’m just appreciative that the fans are still the fans. I think it’s a fun rivalry, just for myself. I know in my heart I’ve always got a little bit more to play for when I play Cleveland.”

Even though training camp’s still a month and a half away, the opener in Kansas City was already on everyone’s minds.

“Oh, man. It’s going to be so much fun,” Kelce said. “I just want to go back out there and start winning football games again and getting back to playing the game that we know how. And what better way than to start off against my hometown team, right? The team that I’ve watched since I was a little kid and I cheered for for my entire life. You know how it goes, I’m a Chief right now and good luck to all the Brownies out there.”

The Browns players share the anticipation of the fans.

“Obviously everybody knows how our season ended last year, so it’s a lot of motivation,” linebacker Mack Wilson said. “All of us I’m sure got that game circled on our calendar with the way we went out. So it’s going to be a fun game, a good matchup, a great team. It’s going to be a great way to start the season.”