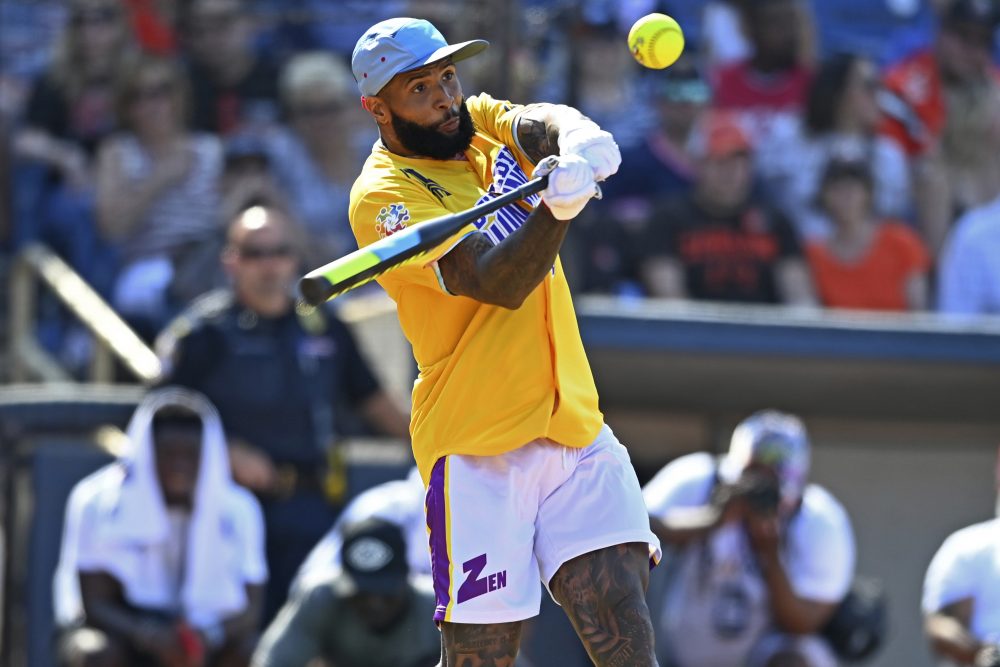 EASTLAKE — Jarvis Landry got a sneak preview of Odell Beckham Jr. earlier this week during workouts in Austin, Texas.

“Man, he looked amazing,” Landry said Saturday before his charity softball game. “I can’t wait for you guys to see him. I can’t wait for him to get back out there. He’s in fantastic shape and he’s ready to go. He’s only what, 6 1/2 months (out from surgery), and he’s already doing some things that will blow your mind away.”

Beckham suffered a torn anterior cruciate ligament Oct. 25 against the Bengals. He had surgery Nov. 10 and missed the Browns’ trip to the playoffs and wild card victory at Pittsburgh.

He posted videos of his rehab on social media, slowly working his way back in the weight room and on the treadmill. He’s expected to be at mandatory minicamp this week in Berea.

“I don’t expect nothing less from Odell,” Landry said. “That’s his character and that’s who he is. He’s a guy who’s always going to train hard and be prepared.”

Beckham struggled to hit a ball hard, or even make contact, during the home run derby Saturday, then pitched and played shortstop during the celebrity game. He didn’t wear a brace on the knee.

Quarterback Baker Mayfield hosted the workouts in his hometown of Austin, with many of the Browns’ skill players attending. One play by Beckham proved to Landry he was back.

“He ran a post route, sticking off the same injured leg and exploding out of it, then going up, jumping off that same leg and making a catch, doing his thing — what he does with one hand,” Landry said. “You sit back and you’re like, ‘Wait. He’s even better than he was last year.’

“So it’s going to be amazing to see as time (goes on) and the further he gets away from surgery how much better he’s going to get.”

Landry said the training sessions in Austin included a lot of throwing and lake time.

“I missed those guys, so it was good to get out there and see everybody,” he said. “It was very efficient, it was very effective. We got a lot out of our time there. So it was pretty fun. It was definitely effective and definitely much needed.”

Most of the key offensive players chose to stay away from the voluntary organized team activities at Browns headquarters, while a good number of defensive starters reported for at least a few of the practices.

“We talked and a lot of guys have felt really comfortable being away from the facility and feeling that they could still get their proper amount of work that when they come back to the facility that they’ll be ready,” Landry said. “And we made that decision and we got together throughout the offseason and there’s nothing wrong with that.”

He said the players in Texas attended virtual team meetings and took the coaching points to the field.

Second-year left tackle Jedrick Wills Jr. showed up for at least one OTAs practice last week. He was the lone member of the starting line to attend any after center JC Tretter, president of the NFL Players Association, led the movement to skip the voluntary offseason workouts at team facilities.

“I wanted to go ahead for myself personally and get some work in before we went into training camp, where it’d be good on good and things like that, so just for the better benefit of myself,” Wills said.

He said the players made a decision not to attend the start of OTAs, and he didn’t report until the final week. He said Tretter, left guard Joel Bitonio, right guard Wyatt Teller and right tackle Jack Conklin trained together at T3 Performance in Avon.

Mayfield showed a sweet left-handed swing with power during the home run derby. He hit seven in each of the first and second rounds and tied for the victory with agent Demarious Bilbo.

Mayfield played third base during the game and spiked his glove in disgust after making a bad throw. 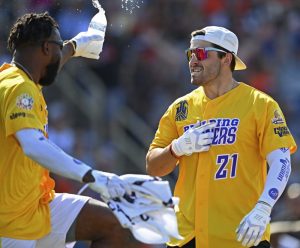 “It’s awesome, man, and it’s so much mutual respect,” Landry said. “A lot of these guys I’m definitely fans of and to have them here in the city of Cleveland, for this cause, it’s something that’s very special and near and dear to my heart.”

FACE IN THE CROWD

Wilson could face an uphill climb to keep a roster spot after Anthony Walker Jr. was signed in free agency, Malcolm Smith was re-signed and Jeremiah Owusu-Koramoah and Tony Fields II were drafted.

“I wouldn’t necessarily say it motivates me because as I’ve gotten older, and I’m Year 3 in the National Football League now, I was able to understand that it’s a business,” Wilson said. “It’s not about they don’t feel like I’m capable, anything like that. It’s just that’s the business part of this league, and they feel like we were slacking at linebacker or we needed depth at linebacker, so they went and drafted two linebackers. It’s just creating competition in the room, and I feel like it’s going to bring out the best in all of us.”