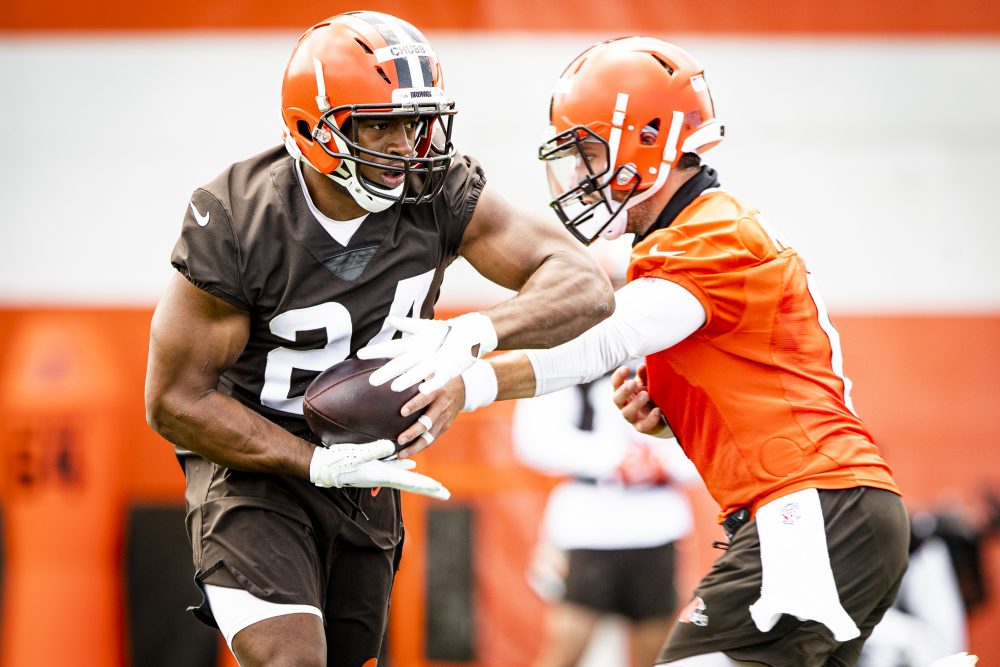 Pro Bowl running back Nick Chubb is entering the final year of his four-year rookie deal.

“Cleveland’s where I want to be,” he said Tuesday on Zoom before the start of minicamp. “I hope everything can work out in that direction.”

Chubb said he will leave the negotiations to his agent and the Browns but said he believed the sides had spoken about an extension. He’s comfortable here and his focus is on staying.

“It would mean a lot,” Chubb said. “Cleveland drafted me however many years ago it was and trusted me and put their faith in me to come here and help build this culture.

“I don’t like uncertainty and I know here in Cleveland what I have with the players and coaches and just the city of Cleveland. I don’t know how things would be anywhere else. Cleveland is where I want to be and that’s my main focus, just being here in Cleveland.”

Chubb was the No. 35 pick out of Georgia in 2018, and because he wasn’t chosen in the first round his contract didn’t include a fifth-year option. The Browns have other key players eligible for extensions, including quarterback Baker Mayfield, cornerback Denzel Ward and right guard Wyatt Teller, but could try to finish Chubb’s deal first. He’s scheduled to be a free agent in March and has been a model teammate.

Chubb figures to fit somewhere in that group. He said he doesn’t have a preference for when the deal gets done and told his agent to “handle it for me until he needs me.” He’s confident he won’t be distracted in the meantime.

“No matter what happens, I will still be who I am,” he said. “And I think that is the biggest thing I am focused on is continue to be who I am and be the guy I need to be for this team.”

Ward, the No. 4 pick in 2018, expressed similar sentiments when asked about an extension. The Browns picked up his fifth-year option for 2022 but can sign him to a long-term deal at any time. He said his agent has been in communication with the organization.

“In a perfect world, I’d definitely want to be a Brown for my entire career,” Ward said. “I’m from Cleveland, the team that drafted me, the team that believed in me coming out of college, and I take a lot of pride and respect into that and just want to give my all to this team.”

Ward made the Pro Bowl as a rookie. In three years he has seven interceptions, one returned for a touchdown, and 40 passes defensed to go with two forced fumbles, three fumble recoveries and 143 tackles, including seven for loss.

The Rams’ Jalen Ramsey is the highest-paid corner at $20 million a year.

Sheldon Richardson signs with Vikings, says didn’t get deal he wanted from Browns

Defensive end Jadeveon Clowney, who signed a one-year deal in April as a free agent, practiced for the first time with the Browns.

He ended last season with the Titans on injured reserve and had surgery Dec. 6 on a torn meniscus in his left knee. He participated in individual and team drills and showed a burst.

Ward said the additions of Clowney, end Takk McKinley and tackle Malik Jackson will help the pass rush, which will help the coverage.

“Man, that is huge,” Ward said. “We need those guys. We are a tandem, and it works together, so you can never have enough great pass rushers, and that is what those guys are. Looking forward to seeing those guys get after the quarterback and make my job easier in the backend.”

Stefanski was presented with the Pro Football Writers of America 2020 Coach of the Year Award to open his post-practice Zoom call. He deflected the credit to the players and assistant coaches.

** Chief of staff Callie Brownson remains suspended after an OVI conviction last week in Brunswick. Stefanski said she’ll be back for training camp in late July but wouldn’t get more specific than that.

** Because much of the practice was devoted to seven-on-seven drills, the offensive and defensive linemen ran a series of 60-yard sprints.

** Receiver Davion Davis from Sam Houston State is in camp on a tryout basis.