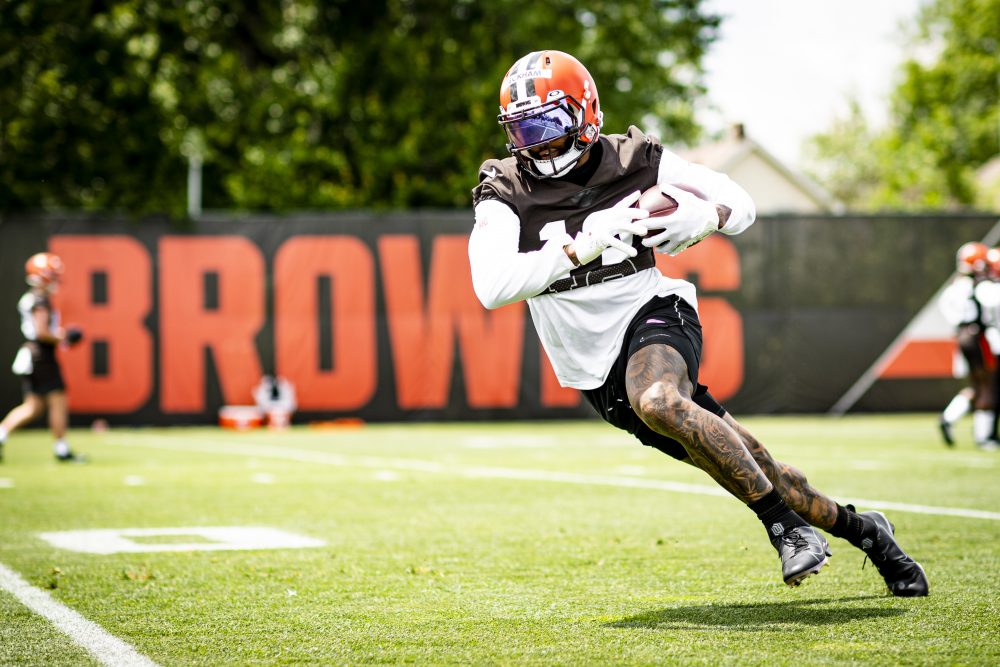 BEREA — No matter where coach Kevin Stefanski turned Tuesday, he saw something that made him smile.

Receiver Odell Beckham Jr. running routes and catching passes on his surgically repaired left knee. Defensive ends Jadeveon Clowney and Takkarist McKinley speeding through pass-rush drills for the first time since signing as free agents. The starting offense together again and on the team’s fields.

Mandatory minicamp looked and felt different than in years past because of a reduced tempo and less contact, but Stefanski appreciated having his full squad in person for the first time this offseason.

“I enjoyed seeing 90 guys out there,” he said on Zoom after practice. “It was really good work out there. We covered a lot of ground. We ran a lot of plays.”

Beckham was limited to individual drills and routes on air, but that was enough to impress Stefanski, who got his first up-close look at Beckham on the field since he suffered a torn anterior cruciate ligament Oct. 25 against the Bengals and had surgery Nov. 10.

Receiver Jarvis Landry shared a field with Beckham last week during training sessions in Austin, Texas, for the first time since the injury and said Saturday that Beckham looked “amazing.”

“He’s already doing some things that will blow your mind away,” Landry said.

Stefanski said he hadn’t kept up with Beckham’s workout videos during the rehab, which showed him lifting weights, running and doing drills.

“But I saw it in person and that was better,” Stefanski said.

The Browns will practice again Wednesday and Thursday before dispersing until training camp in late July. Beckham seems on target to participate more then, but Stefanski stopped short of saying he’ll be full-go at the start.

“We’ll see,” he said. “He looked good today, Day 1 of minicamp, and then we’ll progress and make sure that we’re having obviously dialogue with the player, with the training staff, the medical staff, et cetera.”

The lack of in-person offseason programs last year because of the pandemic led to a different approach when they returned this year. The NFL Players Association emphasized the voluntary nature of the offseason, with the exception of mandatory minicamp, and players on teams across the league used the leverage and example of last season to negotiate fewer and less intense practices.

The Browns had virtual meetings throughout and only two true weeks of organized team activities. Quarterback Baker Mayfield and the rest of the starting offense, with the exception of left tackle Jedrick Wills Jr., trained elsewhere the entire time.

“We had really good communication throughout, both player to player and coach to player,” center and NFLPA president JC Tretter said. “Kevin came to us with his plan laid out. We let everybody know that this was a decision that each individual player was going to make — we are not telling anybody that they can’t go, we are not telling anybody they have to go. We made it clear to everybody when we get back here in person for mandatory stuff, you have to be ready to go.

“We know the type of guy Kevin is and this organization so we knew he was not going to kill us, he was going to have a pretty good program put into place.”

Many members of the defense attended at least a portion of the OTAs — Clowney and McKinley didn’t — but Tretter said there was no animosity between players who did and didn’t.

“I do not think there was any pressure, and I am definitely not mad at anybody for coming,” he said. “We had our own calls with just players where we could talk about it just as a group, and we made it really clear that we are a team and there are no hard feelings either way.”

Without an in-person offseason a year ago, this is Stefanski’s first time running one as a head coach. The Browns went full speed Tuesday in individual drills and seven-on-sevens but went slower in the 11-on-11 periods.

“We are trying to be really smart about our pace,” he said. “I think the days of going full speed in those periods, it just does not make sense. There is injury data to back that up, and the guys are not wearing shoulder pads so it is hard to protect themselves.

“We feel like we can go full speed in individual to work on our technique, and we can go full speed in seven-on-seven and take care of each other and stay away from collisions. When we get to those team drills, we are really putting an emphasis on alignment, assignment and communication, and then we are just going to slow it down post-snap. I just think that is part of us taking in all of the information and making sure we get really, really good work in without exposing any of the guys to undue injury.”

Tretter views the changes across the league as progress for the players.

The focus shifted Tuesday to setting the stage for training camp.

“It is a great feeling to get back out there with the team and to see all of the faces, see all of the coaches, the guys and see new faces, too,” running back Nick Chubb said.

He’s already pumped about Beckham’s return to an offense that led the Browns to an 11-5 record and a playoff win last year despite Beckham getting hurt in Week 7.

“We can do a lot. If we were that good without OBJ, we can be even better with him,” Chubb said. “I believe he is back to himself, so I am excited to see.”

Sheldon Richardson signs with Vikings, says didn’t get deal he wanted from Browns
Baker Mayfield “in no rush” for contract extension, says focus is on winning