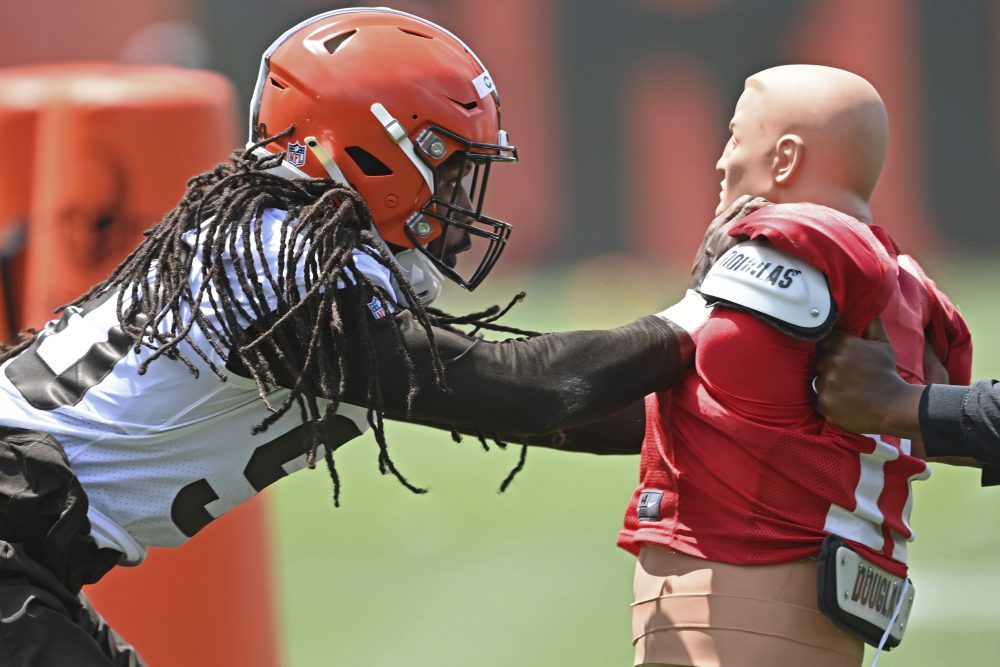 BEREA — Jadeveon Clowney is in his eighth season and with his fourth team since being the No. 1 pick of the 2014 draft.

He’s finally found someone who has a similar set of freakish athletic skills — fellow defensive end Myles Garrett, the No. 1 overall pick in 2017.

“It’s funny I haven’t run into many guys like that in the National Football League yet. It took me eight years to get here to find another one like that, on defense, anyways,” Clowney said Wednesday on Zoom before a minicamp practice. “But it’s great. Knowing what type of guy I’m looking at, I know he’s going to ball and do his thing.”

Clowney and Garrett were familiar with each other from sharing the same agent, Bus Cook, for a time, but Tuesday was the first time they practiced together. Garrett (6-foot-4, 272 pounds) and Clowney (6-5, 255) joined tackles Malik Jackson and Andrew Billings on the first-team defensive line.

“My two tiny friends?” quarterback Baker Mayfield said of Garrett and Clowney. “It’s fun to watch them work. I wouldn’t say it would be very fun to go up against them. I think that duo creates a lot of stuff for a lot of other people in the backend.

“Obviously we have a lot of guys that are very talented, so it’s not just those two, but they do add a special dynamic when it comes down to offensive scheming that you have to worry about those two guys.”

Clowney signed a one-year, $8 million deal in April. He spent last season with the Titans but was limited to eight games and no sacks and had surgery Dec. 6 to repair a torn meniscus in his left knee.

Injuries have been an issue through Clowney’s career — he’s played 16 games in a season only once, in 2017 — but after skipping the voluntary portion of the in-person offseason program, he reported to Berea this week healthy.

“I proved to myself I’m feeling good coming off the knee injury,” he said. “I’ve been training extremely hard this offseason, so I already kind of had a feel of where I was coming here. I wouldn’t have come if I wasn’t healthy.

“I felt great coming in. I feel great now. Hopefully I can continue it into this next phase and keeping being strong and faster and get ready for training camp.”

The defensive line drills were fun to watch Tuesday during Clowney’s Browns debut. The players competed and joked throughout, with the big bodies running around giant hoops and weaving through blocking dummies.

“The thing about me, man, I like to have fun no matter what team I go to or where I go,” Clowney said. “I’m an excited guy. I know it’s a job, but I try to say it’s football first. I always enjoy playing football. It’s not really a job. We’ve got the best job in the world. Why not put a smile on your face when you’re out there running around and they pay you for this and I would play for free?”

The Browns are among the 16 teams with at least 51 players on the 90-man roster who are vaccinated, Stefanski confirmed. He wants the number to keep rising.

“We are not 100 percent so we are going to make sure we continue to educate our guys on how this can help themselves and their families,” he said. “We have talked about how it is a competitive advantage.”

The NFL has greatly reduced protocols for anyone fully vaccinated, including not wearing masks inside, less frequent tests for COVID-19 and no travel restrictions during the season.

“I have gotten vaccinated — did plenty of research going into it and felt really good about it,” center JC Tretter said Tuesday. “I do not love the word ‘incentives’ because I think we are just following the science like we have from the beginning. It is following the science and doing what the research, the data and science tell us vaccinated players can do based off of what the transmission rates are versus unvaccinated players.”

Tretter was never a fan of OTAs, even when he would participate in them. He skipped the voluntary practices this year and is glad he did.

Tretter said without shoulder pads and the ability to use a shoulder to block, it’s not a game-like scenario.

“I know if I go to OTAs at this point, there are really only two things that could happen — No. 1, I am going to have more wear and tear on my joints, which is not great for me, and No. 2, I have an increased likelihood for a season-ending injury.”

No. 1 cornerback Denzel Ward will likely have three fresh faces right behind him on the depth chart this season.

“I think we can be dominant,” he said. “You can never have enough corners. All of those guys can play. They have shown that.”

Those guys are rookie Greg Newsome II, the No. 26 pick in the draft; Greedy Williams, who missed last season with a shoulder injury; and nickelback Troy Hill, who was signed in free agency. Ward attended OTAs and came away impressed with Newsome, who will battle Williams for the starting spot opposite Ward.

Ward agrees with Kansas City All-Pro tight end Travis Kelce, who said Saturday the Browns are “neck and neck” with the Chiefs, who have been to the Super Bowl the last two years.

“I definitely believe so. I don’t see why not,” Ward said. “I feel we can beat that team and we can beat whoever we line up against. We just have to do our job and everything else will take care of itself.”

Running back Nick Chubb said the confidence was gained last year when the Browns went 11-5 and beat the Steelers in the playoffs, before losing 22-17 in Kansas City in the divisional round.

“The biggest thing is we know we can be a good team,” he said. “We showed it every week that we could go out there and we can play with some of the better teams.

“That is exciting for us, but we are not still living off of last year. For us, it is about continuing to get better and become a better team.”

Minicamp ends Thursday with a short practice, and then the players will be dismissed until training camp in late July. Stefanski said his message will be to stay safe, stay in shape and recharge their batteries.

** Offensive lineman Chris Hubbard has yet to practice since knee surgery in December, and Stefanski wouldn’t say if he’s expected to be ready for training camp.

“He is hitting all of his benchmarks on his rehab so we will see over the course of time,” Stefanski said.

** Safety Grant Delpit (Achilles) worked on the side after practicing Tuesday, as planned.