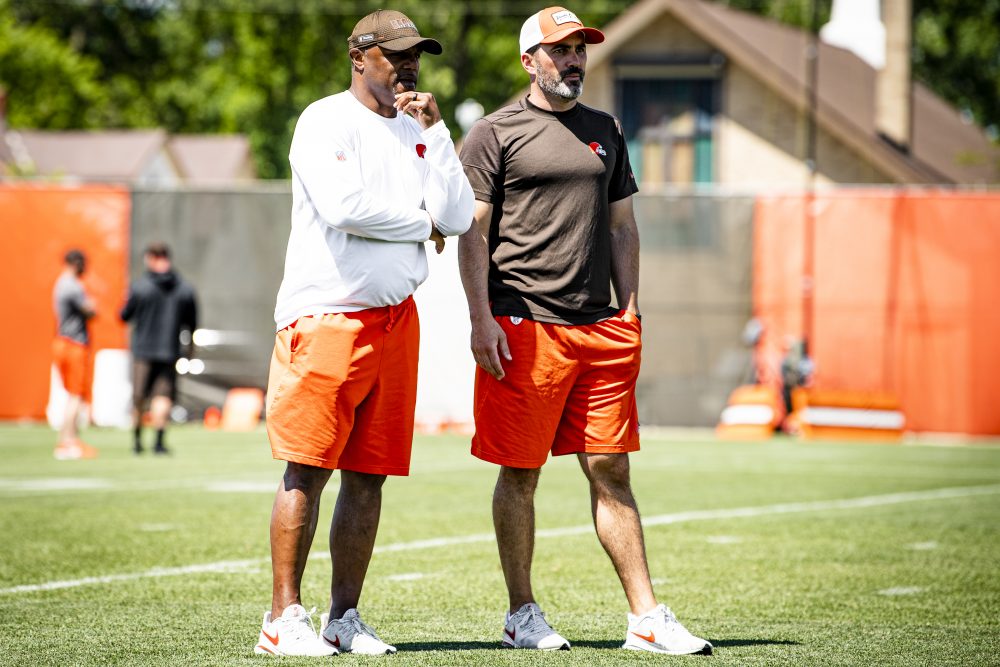 The NFL’s version of Peter Parker’s “with great power comes great responsibility” may not be as philosophical, but it certainly applies to defensive coordinator Joe Woods.

He isn’t running from the pressure.

“I will be honest with you, it is the NFL. I have been in the hot seat for 30 years,” Woods said Thursday on Zoom after the final practice of minicamp. “You keep your job based on how your players, your position or your unit performs. This is a show-me game.

“That is the NFL, and I have to produce. I am in charge of the defense, and I am excited about it. The players we acquired, I am excited to get going and really hopefully play better defense than we did last year.”

Woods, who was handcuffed by injuries and a lack of depth in his first season with the Browns, spent the offseason celebrating.

First in free agency and then through the draft, general manager Andrew Berry stocked the defense with talent. He went after players with the body types, skill sets and versatility to fit Woods’ scheme and vision.

“Very excited — not only me, the whole entire defensive staff,” Woods said. “I feel like AB and the scouts did a great job in free agency and a great job in the draft, just in terms of bringing in talented players at key positions. We are excited about the future and can’t wait to get training camp going.”

With holdovers defensive end Myles Garrett and cornerback Denzel Ward and the expected return of safety Grant Delpit and cornerback Greedy Williams after missing all of last season with injuries, Woods’ defense is projected to be on even footing with the high-powered offense on a team with Super Bowl expectations.

The pressure is on.

“I am on the hot seat. We are all on the hot seat,” coach Kevin Stefanski said Wednesday. “The second we are in this building, we have to fight for everything we get. We are earning it every day.”

The defense dealt with injuries throughout last season, starting with Delpit (Achilles) and Williams (shoulder) going down for the season Aug. 24 during training camp. Garrett and Ward missed time during the season, as did safety Ronnie Harrison Jr.

Woods built his career as a secondary coach and was forced to piece together rotations. He coached under highly respected coordinator Wade Phillips in Denver and prefers to use five or six defensive backs in key situations but didn’t have the bodies to execute his system.

“Last year, there was a whole lot of things you can say, but we have the mindset of no excuses and no explanations,” Woods said. “Week in and week out try to find a way to win.

“Just based on practice time and players available, there were certain things that we were not able to get to, but now moving forward, we have already started the process in the offseason of installing some new defensive packages and some new cover schemes, just so we can dictate the tempo a little bit more.”

Johnson, Hill, Delpit, Newsome and Williams joining Ward and Harrison allows Woods to open the playbook. Johnson, Delpit and Harrison as a trio of playmaking safeties work perfectly in the six-defensive back dime package.

“You are always trying to put yourself in a position where you have favorable matchups,” Woods said. “When we go dime, we are putting more cover guys on the field, and we are putting more speed on the field. It probably will not be as much as I ran in Denver, but it will definitely be a lot more (than last year), especially on third down and maybe two-minute situations.”

Delpit and Williams have returned to team drills and appear on schedule to be full speed for the start of training camp in late July.

“When you look at those guys, they have size, length and speed,” Woods said. “Grant is versatile. We have brought them along slowly, but they were out there. You get excited because you see what you are capable of doing and the packages you can create.”

Woods headed straight to the whiteboard after Berry drafted Newsome at No. 26 then traded up seven spots to No. 52 to grab Owusu-Koramoah.

“It felt like we got two first-rounders, for sure,” Woods said. “Those guys are very smart players and they are very competitive players. They just bring a different element to the team.”

The Browns picked Owusu-Koramoah for his speed, coverage ability and versatility. Woods has tried Newsome in the slot over the last month, which would allow him and Williams to be on the field at the same time in the nickel package.

“When we come back in training camp, we will see how he progressed and for him to keep moving in that direction or just focus some more outside at corner,” Woods said. “Right now, I believe he is capable of playing both positions.”

All the new faces require an adjustment period and could lead to growing pains. The defense could have as many as nine new starters, which is why many of them attended organized team activities to begin building an on-field rapport.

“It is my job to go in there and our job as coaches to teach these guys the scheme, the techniques that we are using and to rep it,” he said. “You are going to have things that you are going to come across and adversity throughout the season, but as long as we can establish our defensive scheme and guys can execute, I feel like it will not be as much of a problem as people may think it will be.”