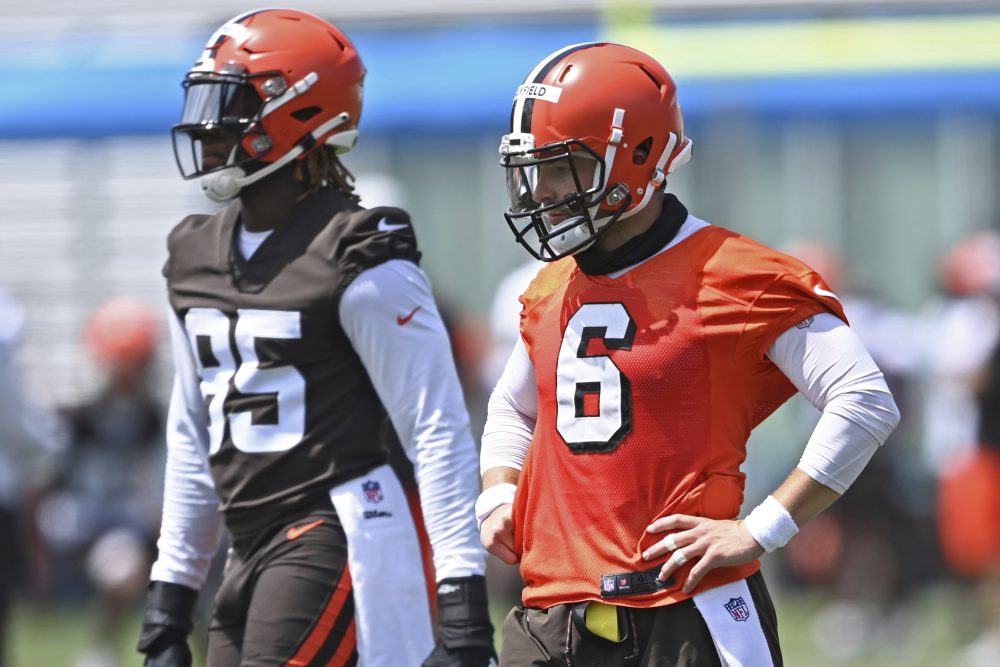 The Browns concluded the three-day mandatory minicamp Thursday, and the offseason practices ended with Mayfield throwing touchdown passes to tight end David Njoku, who made a leaping catch in the back of the end zone, and second-year receiver Donovan Peoples-Jones.

“He was impressive,” Van Pelt said of Mayfield. “There are a lot of areas and a lot of pass concepts that we wanted to work on in this minicamp that maybe he did not completely own last year and wanted improvement in these plays. He has shown that.

“A lot of that is just working through progression and knowing where to go next if one and two are covered, and he got that accomplished in this camp. We are very happy with where he is right now.”

Van Pelt senses a carryover in confidence from Mayfield’s strong finish a year ago, as he led the Browns to an 11-5 record and playoff win. Over the last six regular-season games, he completed 65.2 percent for 1,713 yards, 11 touchdowns, an interception and a 103.4 passer rating.

“Definitely. Definitely. I figure the last seven, eight games last year, he really played really well,” Van Pelt said. “I think he now feels that. He understands what that looks like and how he has to operate within the system to be successful. Now that he realizes that, you see it more in practice. Definitely.”

Mayfield (6-foot-1, 215 pounds) transformed his body before last season after carrying extra weight in 2019. He was quicker, made several plays with his feet and came back in similar shape.

“He is in a great spot physically right now,” Van Pelt said. “I know his weight is where he wants it. I want to say it is probably close to where he came in last year. It is already there. We still have five weeks to go before he comes back for training camp. I know he works extremely hard at it and it shows.”

Receiver Odell Beckham Jr. didn’t practice Thursday, working on the side, after participating Tuesday and Wednesday. Van Pelt said it was part of the plan as Beckham continues to come back from surgery Nov. 10 to repair a torn anterior cruciate ligament.

Van Pelt was the latest to rave about how good Beckham looked in his return and expects him to provide a jolt to Mayfield and the offense this year. Van Pelt once again shot down the idea that Mayfield benefited from Beckham’s absence after the injury Oct. 25.

“I think Baker was better as the season went on, whether there had been Odell or not still out there,” Van Pelt said. “He started to understand the offense more, understand what we were asking him, got his footwork right and I think he got better, regardless of who was on the field.

“You are always better with great players. We will be better with Odell, no doubt. He is an elite player. Not having him out there, we had to fight and claw to continue to have offensive success. I know it is a lot easier when you have great players.”

Running backs Nick Chubb and Kareem Hunt took turns tormenting defenses last year. They could do it together this season, as the coaches expect to use them at the same time more often in the second year of the system.

“Absolutely,” Van Pelt said. “We felt very comfortable with how we used them last year — kind of the one-two counter punches and keeping them both fresh as long as we could into each game. However, you want to put your most talented players on the field, and Kareem is definitely deserving of getting playing time, along with Nick in certain packages. Those are things we have looked at in the offseason and will continue to grow.”

ONE STEP AT A TIME

Defensive coordinator Joe Woods has big plans for rookie linebacker Jeremiah Owusu-Koramoah, a second-round pick out of Notre Dame. It just might take awhile to implement them all.

“Things are going well with him,” Woods said. “A very smart player, very athletic. You can see the speed, the quickness and the change of direction. He will be able to match up well against tight ends.

Andrew Billings stands out among the large crop of defensive tackles. He’s listed at 6-1, 328 pounds, while the other tackles are taller and leaner.

Woods has a spot for him.

“He is a grown man. He is very strong,” Woods said. “I think he was a power-lifter in high school. He said he is not as strong as he could be, but he said give him a month and he will be back to squatting 900 pounds.

“He is definitely part of our plans. Definitely a first- and second-down run-stuffer type of player. He has a great personality and fits in great with the guys. He will definitely play a role for us this season.”

“I do not think he is in the ideal football shape that he wants to be in,” Woods said. “That is why you go through OTAs, summer working out and come back in training camp just to get yourself where you need to be.”

“We need to improve our return game immensely,” he said.

Priefer said he’d love for Schwartz to develop into a kickoff return because of his elite speed. He also wants to use him as a gunner on punts and in kickoff coverage.

He believes Felton can return kickoffs and punts.

“He has great quickness,” Priefer said. “I do not think he has tremendous speed, but he has good speed.”

** Kicker Cody Parkey was charged with getting stronger in the offseason. Priefer said he didn’t go in the weight room last year due to the virus and worries about his pregnant wife.

“He put on 7 or 8 pounds of muscle,” Priefer said. “He looks really good. He is stronger. He is kicking off better. He feels more confident. He still has a little bit of work to do, and he has positioned himself very well for this competition.”

The Browns signed Chase McLaughlin to battle for the job.

Defensive lineman Malik McDowell practiced for the first time in weeks after sitting out with an injury.

** Natson and safety Grant Delpit practiced after working on the side Wednesday as they return from surgeries last season.