5 takeaways from 3 days of minicamp 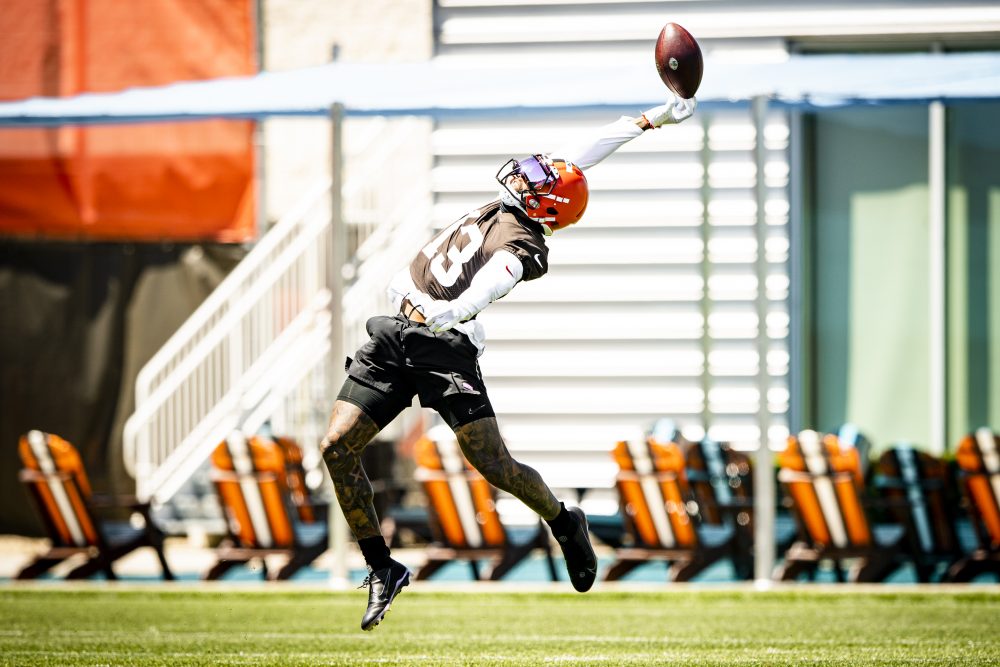 The Browns won’t be on the field again until training camp in late July. The six-week break provides lots of time to talk about Super Bowl expectations, contract extensions and the regular-season opener against the Kansas City Chiefs.

First, it’s appropriate to reflect on the three-day mandatory minicamp that wrapped up Thursday in Berea.

For the first time this offseason, the full team gathered in the same place to practice. While there were no pads and little contact, the action was plentiful enough to make some observations.

The social media posts of the past few months provided a preview but it still felt necessary to see receiver Odell Beckham Jr. on the fields at Browns headquarters running routes and catching passes.

His left anterior cruciate ligament tore Oct. 25 against the Bengals, was surgically repaired Nov. 10 and Tuesday was the first time he practiced with the team. He exceeded expectations, which is why he continues to inspire headlines.

Beckham proved once again that he’s among the most freakish athletes in the world. Modern medicine has come a long way, but looking as good as he did seven months after major surgery is remarkable, and something most professional athletes couldn’t attain.

Beckham looked fast and fluid as he ran routes in individual drills, even jumping for the one-handed catch he patented. Unless he suffers an unexpected setback, Beckham will be 100 percent for Week 1.

“I know he is working his butt off to be great,” coordinator Alex Van Pelt said Thursday. “Really impressed with his ability to come back as quickly as he has.”

Beckham has yet to live up to the hype in two injury-marred years with the Browns, but his prodigious potential remains. The Browns are desperate for him to fulfill it, because it would transform the offense.

“If we were that good without OBJ, we can be even better with him,” running back Nick Chubb said.

The only disappointment regarding Beckham this week was that he didn’t talk to reporters. He hasn’t since the injury, so the anticipation will only grow until July.

The Browns have a variety of new faces on defense, but it’s hard to believe anyone smiled more than defensive end Jadeveon Clowney this week.

Clowney has been an enigma throughout his career after being the No. 1 overall pick of the Texans in 2014. He made three straight Pro Bowls from 2016-18, when he posted the three highest sack totals of his career with six, 9.5 and nine. But he’s battled injuries throughout his career, has never reached double-digit sacks and had only three in 21 games over the last two seasons. The Browns are his fourth team in four seasons.

He made a great first impression in his first practices in Berea.

Not only did he look quick and explosive during drills, showing no issues following knee surgery Dec. 6 to repair a torn meniscus, he was at the middle of the spirited, good-natured competition among the defensive linemen. His fun personality was obvious on the field and in a Zoom with reporters.

“We already kind of feel like we know each other, and we are not leaving anybody behind,” he said. “Everybody is picking each other up. It is one of those things that I continue to roll that through the guys like, ‘Hey, look, let’s just have each other’s back. Let’s be there for each other.’”

If Clowney can stay healthy, he will serve as a formidable bookend for Myles Garrett. Clowney, who’s been miscast at times as a 3-4 outside linebacker, is grateful to be in a 4-3 scheme where he can concentrate on getting after the quarterback.

“I thrive in going forward,” he said. “Playing up front, hand in the ground is a lot easier and less thinking.”

The angst was wasted.

Too much was made by some fans and media when the vast majority of the starting offense skipped the voluntary portion of the in-person offseason program. The Chiefs were held up in contrast because quarterback Patrick Mahomes and nearly the entire roster attended the team’s sessions.

Despite not arriving in Berea until mandatory minicamp, quarterback Baker Mayfield and the offense were just fine. Practice didn’t grind to a halt because they couldn’t get out of the huddle. The defense didn’t dominate because of dysfunction.

Mayfield and his teammates had participated in virtual meetings for the last two months and met in Florida and Texas for training sessions to apply what they had learned. Coach Kevin Stefanski and Van Pelt liked what they saw from Mayfield.

“He was impressive,” Van Pelt said. “There are a lot of areas and a lot of pass concepts that we wanted to work on in this minicamp that maybe he did not completely own last year and wanted improvement in these plays. He has shown that. We are very happy with where he is right now.”

Safety Grant Delpit (Achilles) and cornerback Greedy Williams (shoulder) continue to progress in their rehabs after missing all of last season, and the latest step was increased participation in the minicamp. While it’d be premature to declare them fully back, especially with Williams needing to test the shoulder in contact drills, they certainly seem headed in that direction.

Their presence would create a variety of options for coordinator Joe Woods. Delpit is slated to be an integral member of the three-safety packages Woods loves to use, and Williams is a candidate to start on the outside opposite Denzel Ward.

Rookie Greg Newsome II, the No. 26 pick, might still be the favorite to win the job over Williams, but Williams worked with the first team throughout minicamp and Newsome spent time in the slot. The secondary gets a lot deeper with a healthy, effective Williams and a versatile Newsome who can play inside and outside.

Receivers KhaDarel Hodge and Donovan Peoples-Jones got a lot of action with the first team as Beckham watched most of the team drills and Rashard Higgins sat out the last two days with a minor injury. It was a reminder that the competition will be fierce for reps as the No. 3 wideout behind Beckham and Jarvis Landry.

Higgins is the fan favorite but opened last year behind Hodge on the depth chart and was inactive for a couple of games early. Peoples-Jones was a sixth-round pick a year ago, caught the winning touchdown in Cincinnati and made an impact in limited opportunities (14 catches for 304 yards and two touchdowns).

Higgins, Hodge and Peoples-Jones each bring different strengths to the position, and it will be interesting to see if one can separate himself and how Stefanski employs them.

Peoples-Jones caught a touchdown from Mayfield on the final play of the week and earned praise from his quarterback.

“Donovan looks incredible right now,” Mayfield said. “He looks like he is in really, really good shape running around. Obviously he is a smart guy who we were able to plug and play. He knows his role and exactly what his job is. It is great to have that same group back, the camaraderie in that room and to hit the ground running.”

5 things to watch at minicamp, starting with the return of Odell Beckham Jr.
Training camp preview: 5 storylines to follow