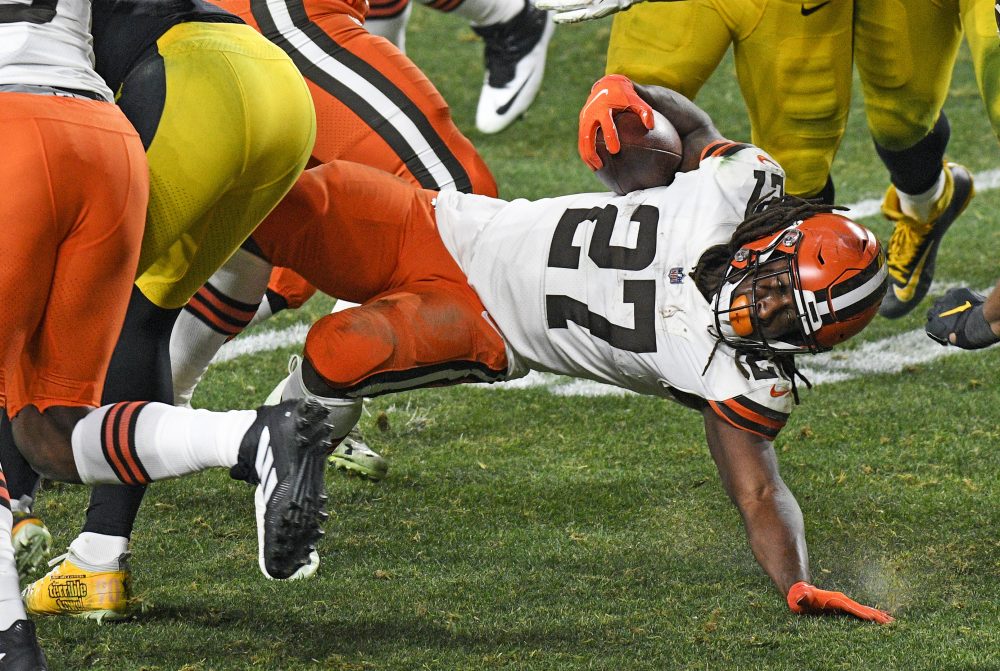 WILLOUGHBY — Nick Chubb might want to bring Kareem Hunt to the negotiating table.

Hunt is passionate about his fellow running back signing a contract extension with the Browns.

“Man, please pay that man,” Hunt said Thursday at his youth football camp at Willoughby South High School, his alma mater. “He’s a freak of nature. And he’s a brother to me, and I love what he does on and off the field. Just a great person and teammate.”

Hunt, 25, signed a two-year, $13.25 million extension before last season that keeps him with the Browns through 2022. Chubb, 25, is entering the final year of his four-year rookie deal and said last week “Cleveland’s where I want to be.”

He said he will leave the negotiations to his agent and the Browns but said he believed the sides had spoken about an extension. He’s comfortable here and his focus is on staying.

“I don’t like uncertainty and I know here in Cleveland what I have with the players and coaches and just the city of Cleveland,” Chubb said during minicamp. “I don’t know how things would be anywhere else. Cleveland is where I want to be and that’s my main focus, just being here in Cleveland.”

Chubb was drafted with the No. 35 pick in 2018, and Hunt was signed as a free agent in February 2019 after the Chiefs cut him following a couple of off-field altercations that led to an eight-game suspension from the league to start the 2019 season. They’ve become arguably the NFL’s best running back tandem and close friends.

Coach Kevin Stefanski runs his offense through the rushing attack and play-action, increasing the value of the duo, especially with Hunt’s receiving ability. Hunt was asked how long he and Chubb can play together in Cleveland.

“I have no idea,” he said. “This is a business, man, so how long (GM) Andrew Berry and everybody wants to keep us together.”

Stefanski, coordinator Alex Van Pelt and running backs coach Stump Mitchell settled on a rotation last year that kept Chubb and Hunt fresh for the fourth quarter but seldom had them on the field at the same time.

As Stefanski looks to expand the playbook in his second year, using Chubb and Hunt on the field together is an attractive option. Hunt led the NFL in rushing as a rookie with the Chiefs in 2017, and Chubb finished second in 2019.

“We’re going to find a way to make it work and get the job done. That’s just how we’ve got to look at it.”

Mitchell predicted last year both would rush for 1,000 yards — only five duos have done so in a season in NFL history — but Hunt fell short. The addition of a 17th regular-season game this season increases the odds.

“It’s very possible. I believed it was possible last year, too, but some things happened,” Hunt said. “We’ll learn from it and get better and hopefully continue to put in good work this year.”

Hunt and Chubb trained a bit together last offseason in Westlake. Hunt would like to do so again … if he can convince Chubb.

“Possibly, if he gets outside,” Hunt said. “All the things he does is work out and hang out with his dog.”