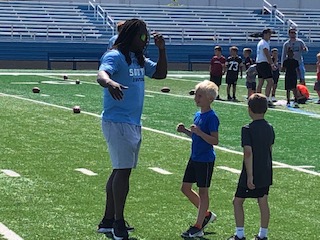 WILLOUGHBY — Kareem Hunt has a list of reasons he’s already counting down the days to the opener Sept. 12 at Kansas City.

For starters, he was drafted by the Chiefs in the third round in 2017, won the NFL rushing title as a rookie and remains close with many of their players and coaches.

“I can’t wait to play some of my old teammates and brothers,” the running back said Thursday during his youth football camp at Willoughby South High School, his alma mater.

But more recent history carries more urgency. The Browns were ousted 22-17 by the Chiefs in the divisional round of the playoffs in January at Arrowhead Stadium.

“We’re very excited,” Hunt said. “That’s a very good test. That’s a great team, a great program. It’s a game we believe we should have won last year, and now we’ve got another chance to get back out there Week 1.

“It was tough last year. We didn’t win it. We went pretty far, but it wasn’t good enough.”

Boosted by their first playoff win in 26 years — 48-37 in Pittsburgh — continuity on offense and an offseason overhaul of the defense, the Browns will arrive in Kansas City with Super Bowl expectations. Hunt isn’t running from them.

“We’ve got a big task on our hands Week 1, and that’s going to show us where we’re at,” he said. “If we continue where we were last year or even better, then I believe that could take us a long way and help us get the win.

“I definitely believe we’re real contenders, and I feel like we can beat anybody in the NFL.”

Hunt followed receiver Jarvis Landry and quarterback Baker Mayfield in saying it’s OK to talk about winning a championship. Even for a team that’s never been to the Super Bowl and returned to the playoffs last season for the first time in 18 years.

He said the Browns “look complete” coming out of minicamp last week and is shooting for greatness.

“Right now, I’m just trying to figure out a way to get over that next step and win every game,” he said. “You just got to do the little things, more details, the smallest little thing, finishing another half-yard, and everybody’s got to do it.

“You’ve got to trust everybody to do their job to the fullest.”

Hunt spoke to a handful of reporters behind the end zone at the stadium where he dominated and earned a scholarship to the University of Toledo. The artificial turf is new since then, but the connection’s the same, which is why he picked the school to host his first camp.

“I’ve thought about it for a long time definitely because the community and the people here, they’ve always had my back and best interest,” he said. “I wouldn’t want to do another kids camp anywhere else besides Willoughby South.

“It means a lot to be able to come back and do this for the school. I had a great time growing up here and going to school here and being a kid.”

Matt Duffy, who coached Hunt in high school and remains in the role, said Hunt’s return meant “a ton” to the participants.

“These young kids are so excited,” Duffy said. “I heard the murmur when he walked on the field the first time, the kids all went nuts.”

“They can’t wait,” Hunt said. “All I hear is the kids talking about (Nick) Chubb, Baker and everybody I play with — my teammates. They should be excited. Those are good guys, good teammates and I’m looking forward to getting out there and getting back to work with them.”

Duffy stuck by Hunt during his off-field troubles that drew an eight-game suspension from the NFL to start the 2019 season after a pair of altercations, including kicking and shoving a woman. The Browns showed their trust in him with a two-year, $13.25 million contract extension before last season.

“You could go from kindergarten through senior year and ask every teacher and principal that he was ever around and you’ll hear all good,” Duffy said. “You ask his college coaches, you’re going to hear all good. He spent a whole lifetime of doing things the right way and now just to see him and how well he’s doing, it’s awesome.