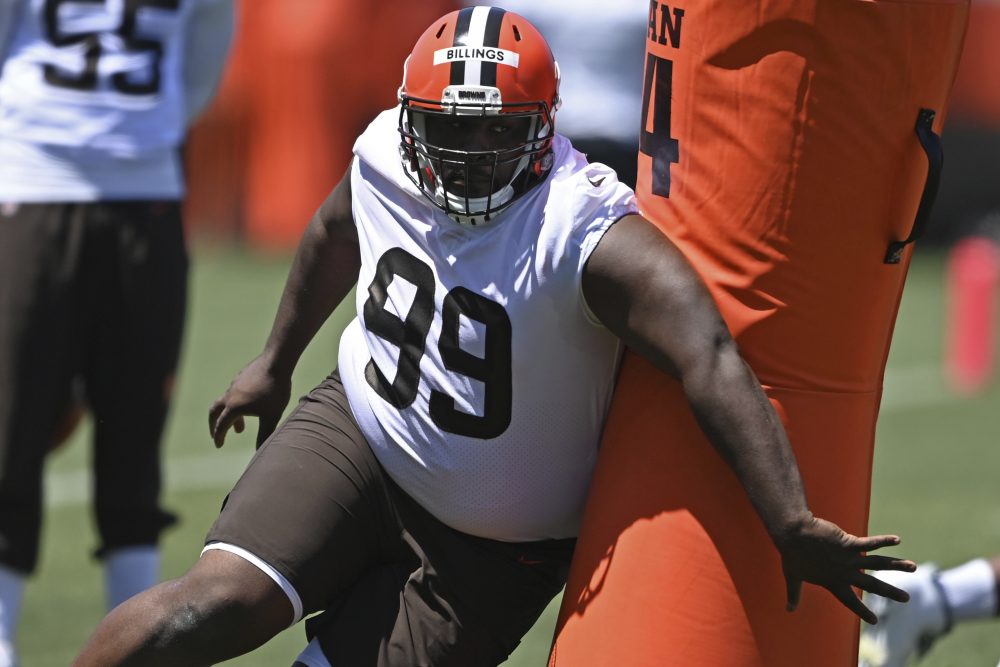 Q: Based on contracts, draft status, scheme fit and health, who do you predict will open the season as the Browns’ starting eleven on defense?

A: My kind of question, getting down to brass tacks. I’ll start with the base defense.

On the line, Myles Garrett and Jadeveon Clowney at end and Malik Jackson and Andrew Billings at tackle. I wasn’t convinced Billings would have a significant role, or even a roster spot, before minicamp, but he was consistently part of the first-team base defense and coordinator Joe Woods all but guaranteed he’d be on the field for run downs.

Linebacker is trickier. Anthony Walker Jr. starting in the middle is the only absolute. I’ll go with Sione Takitaki on the strong side and Jacob Phillips on the weak side. Jeremiah Owusu-Koramoah over Phillips wouldn’t be a surprise.

In the secondary, Denzel Ward and Greg Newsome II at cornerback and John Johnson III and Grant Delpit at safety. I could also see Greedy Williams ahead of Newsome and Ronnie Harrison Jr. ahead of Delpit.

With the proliferation of sub packages, it’s important to go through the changes in the nickel.

Takkarist McKinley would join the line, with Billings heading to the bench. Garrett or Clowney would slide inside. Owusu-Koramoah and Walker would serve as the linebackers. Troy Hill would play nickelback.

Q:
Let’s pretend you can keep the entire team together for the next 5 years, with the exception of one of the guys who is eligible for an extension in the next 2 years. Who is the guy they can most afford to replace?

A: I might get pushback on this, but I feel strongly it’s right guard Wyatt Teller. I believe right guard is at the bottom of the rankings of positional value and don’t think all five linemen need to be studs and highly paid.

This isn’t a knock on Teller, who greatly exceeded expectations last year in his first season as a starter. He’s a beast in the run game and is great to have on the team, but I value more the other four positions and players along the line. I also wonder about Teller’s pass protection, which wasn’t good enough over the second half of the season, including in the playoff loss to the Chiefs. He attributed that to a lingering ankle injury, but I need to see him play better in that area.

A: You’re onto something. Many coaches view joint practices as more useful than a preseason game, so I expect Stefanski to rest most, if not all, his key veterans for the Giants game. Or if they play, it won’t be for long.

Your question brings up a larger issue. With the 17-game regular season and the expectation of a long playoff run, Stefanski will be mindful of trying to keep his roster fresh and healthy throughout the season. That begins in training camp and the preseason. While shorter, less intense practices may rub some the wrong way, it’s important to remember the big picture. This season isn’t about Week 1, it’s hopefully about Week 22.

Q: What is so intriguing about Andrew Billings to the Cleveland Browns? Nothing about him besides his 2019 run stop production is intriguing, so is that the selling point for him amongst the staff?

A: You asked, you answered.

As referenced above, I wasn’t sure how Billings would fit into this defense. When you look at him compared with the rest of the defensive tackles, he looks out of place. He’s listed at 6-foot-1, 328 pounds, and everyone else is at least 25 pounds lighter and as much as 5 inches taller. But Woods was clear he wants Billings to play on early downs as a run stopper.

There’s been so much talk about the Browns getting lighter and faster on defense, but Woods is trying to strike a balance. I think the same philosophy applies with Takitaki. He likely won’t be on the field for passing downs, but I think the Browns value his ability against the run enough to devote a roster spot.

Q: Nick Chubb says he “thinks” his representatives have talked with the Browns regarding his contract. How should I read into “thinks” in the game of contract negotiations? Is this the beginning of some gamesmanship?

A: You could be an honorary sportswriter. We spend a lot of time parsing comments for the true meaning.

But I don’t think there’s any need to play Columbo on this one — I know you’re old enough to get this dated reference. Players and coaches have fallen into the habit of adding “think” to just about every sentence, and I don’t think Chubb meant anything by it or was trying to send a message to the Browns.

In fact, I was struck by Chubb’s candor and think it bodes well for a deal. He sounded honest when he said he likes certainty and knows what he has with the Browns. If anything, that cost him leverage. Bottom line: A deal will get done.

Q: Why do NFL teams even bother to offer non-guaranteed years in contracts? It seems like the vast majority of athletes with non-guaranteed years end up being cast off. Athletes are human beings with emotions just like the rest of us. When Sheldon Richardson signs with the Vikes for less money than the Browns offered, ill will has to play a role.

A: I see your point, but there are two benefits for the player. The first is about ego. The bigger the numbers in the contract — guaranteed or not — the better it looks. The second is those years can become guaranteed. Yes, it’s up to the team, but if a player makes himself indispensable, he’ll get all the money in the contract. I don’t see non-guaranteed years going away anytime soon, but it is important for everyone involved to realize the original numbers reported aren’t likely to be reached.

Regarding Richardson, there’s no doubt the Browns cutting him when he was due $11 million left a bad taste in his mouth and made a return unlikely from the start.

Q: Not sure where you stand on the vaccine. Slippery slope the NFL is headed for with training camp around the corner. How do you see it playing out for all concerned?

A: The league and teams are doing all they can to get as many players as possible vaccinated before training camp. They, as do I, believe vaccination is not only the best way to have the best season, it’s vital to the health of the country as a whole.

Unfortunately, there’s been a lot of hesitance and resistance among players. The league’s strict protocols for the unvaccinated will make a dent, but it’s still unclear how big.

I think camp is going to start with a number of teams under whatever vaccination threshold the league sets. That will create issues for the organizations, who will have two sets of rules for their players. It will also mean meetings and travel won’t be back to normal. More important from a football perspective, players being unavailable for games because of positive COVID-19 tests will continue through the season. I’d imagine the fans supportive of a player’s right to not get vaccinated would have a change of heart if he misses a big game due to a positive test.

Mailbag: With Julio Jones traded to AFC, how important is it that Odell Beckham Jr. play like Pro Bowler? How will change in preseason affect playing time?
Mailbag: Where do Browns have biggest chance for improvement? Will Nick Chubb and Wyatt Teller sign extensions before the season? How many WRs will be active for games?