Destined to dominate? Defensive line has enormous potential but plenty to prove 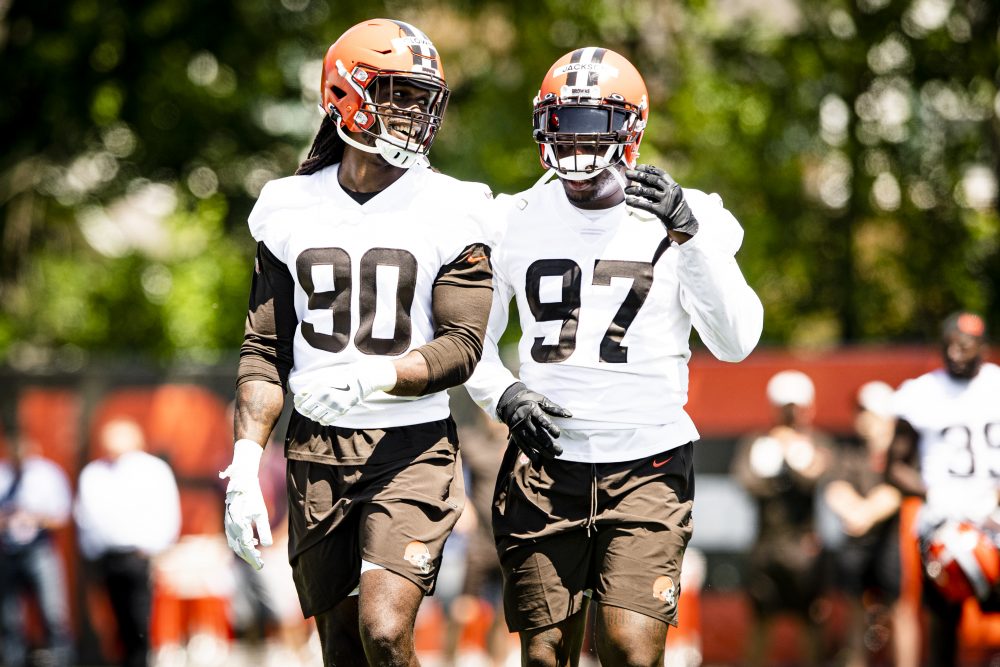 Jadeveon Clowney had an interesting thought when the Browns coaches showed a highlight tape of him and his new teammates along the defensive line.

“It reminds me of when I watch San Francisco, the same team a couple of years ago that went to the Super Bowl and that defense,” he said during minicamp. “I am thinking we can do that upfront in ways, rotate guys and guys come in and play well.”

Clowney’s statement speaks to the potential of Cleveland’s reconstructed defensive line, and the overall excitement heading into the season.

He and fellow end Myles Garrett form an intimidating tandem of former No. 1 overall picks, and should help each other get to the quarterback by drawing the attention of multiple blockers. They, along with 6-foot-5, 290-pound tackle Malik Jackson, will bounce across the line looking for mismatches. The front should be a force on a defense that will have as many as nine new faces in the starting 11.

The excitement is justified. It should also come with a couple of warnings.

Promise doesn’t always equate to production. Coordinator Joe Woods was the passing game coordinator/defensive backs coach on the 2019 49ers team that was led by its dominant front four and lost the Super Bowl to the Chiefs.

“When I was in San Francisco, we went through the season so you can see the results of it because we played 19 games,” he said. “We have not played a game yet, and on paper, it all looks good, but it is all about what you do between the white lines.

“You can see we have ability, but it is all going to be based on how we perform if we are similar to that unit.”

The 49ers had five first-rounders on the line — Nick Bosa, Arik Armstead, DeForest Buckner, Dee Ford and Solomon Thomas — who combined for 35 sacks on the NFL’s No. 1-ranked pass defense.

In a perfect world, that’s plenty of talent and depth.

“I am very excited about the rotation of the group,” Clowney said. “The backups can come in and play just as good as the ones, and that is even better. Any time you have that going on, you have a good group.”

Another worry would be the domino effect of an injury to Clowney, who signed a one-year, $8 million deal in April. He’s been plagued by injuries throughout his career, including missing eight games last year and having surgery to repair a torn meniscus. If he’s not in the lineup for an extended period, the line looks a lot less imposing.

The expected third-down pass rush of Garrett, Clowney, McKinley and Jackson would likely see a significant drop with whoever takes Clowney’s spot. The versatility would also take a hit.

Garrett, Clowney and Jackson can all rush from the inside and out, and Woods plans to take advantage of the flexibility. He referenced his time with the Broncos and elite pass rushers Von Miller, DeMarcus Ware, Shaq Barrett and Bradley Chubb.

“We want to be able to affect protections,” Woods said. “We can move guys around and create the one-on-ones that we want to create.

“That is what excites me the most is really just digging back into those packages when we have our pass-rush unit out there in passing situations and doing what we want to do.”

At full strength, the Browns should create nightmares for the opposing offensive line. Left guard Joel Bitonio knows what it’s like to face defenses that shuffle quality pass rushers across the front.

“You hope the best guy does not line up over you when they have three or four guys who are like that,” he said. “It is a challenge because they can move things and they can shift the D-line. You think Myles is going to be playing D-end and that is where you want to double-team him, and then they move him inside.

“If you put three of your rushers on one side and leave Myles on the other side, are you going to slide to a three-man side or are you still going to double-team Myles? There are a lot of options that can open up.”

Clowney doesn’t mind rushing from the interior but said it’s a different world in the middle of the mass of humanity.

“The game’s all about matchups, and I think Coach Woods has the tools to be able to do that,” Jackson said.

While Garrett is the key holdover at end, the tackle group is almost completely new.

Starters Sheldon Richardson and Larry Ogunjobi are gone, while Jackson was signed as a free agent in March, Billings opted out of 2020 after being signed away from the Bengals in free agency and Togiai was drafted in the fourth round out of Ohio State. Elliott, Malik McDowell and Marvin Wilson are among the others competing for roster spots and playing time inside.

The competition was obvious during minicamp drills, as was the energy led by Garrett and Clowney.

“It’s very important, because at the end of the day we are 16 guys in a room and only four can start, I think only eight dress, so there’ll be some hard decisions,” Jackson said. “I think it’s important for us to understand that we’re here laughing together but also understand we are fighting for a job against each other. I think we’re all cool guys, everybody understands, everybody wants to be great and everybody’s working toward it.”