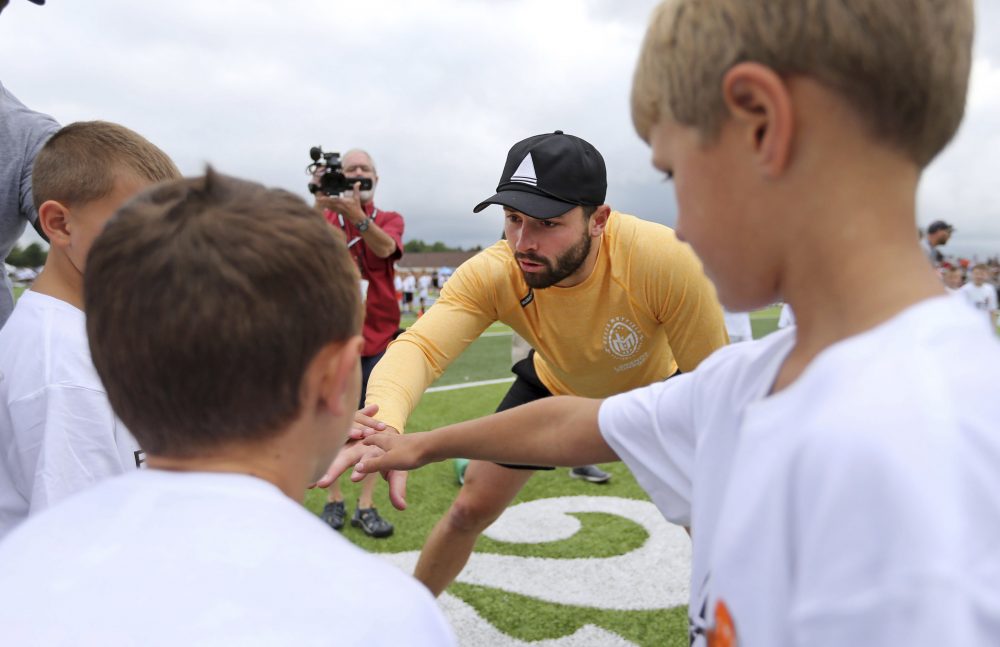 The Browns could be dealing with all of the above, and more, as they enter training camp next week following the organization’s first playoff victory in 26 years in January. They’re viewed as a legitimate Super Bowl contender, as the entire starting offense returns and a bevy of big names were added to the defense in the offseason.

Quarterback Baker Mayfield says the team must keep its edge and forget about the breakthrough season that included an 11-5 regular-season record, the first playoff appearance in 18 years and a 48-37 wild card win at Pittsburgh.

“Nothing’s going to be given to us. We have to earn it.”

Mayfield spoke to reporters during a break from throwing to the youngsters. The Browns’ rookies and quarterbacks are scheduled to report to training camp Saturday, with the veterans due in Tuesday. Practice begins next Wednesday in Berea.

“But I’m excited because of our locker room. People talk about talent and players and names, but it’s a really good group of guys, and that’s what has me most excited.”

Mayfield’s youth camp was held for the second time in the area. It was skipped last year due to the pandemic.

Mayfield and the Browns were directly affected by the coronavirus and the NFL’s protocols last season. All-Pro defensive end Myles Garrett missed two games with COVID-19 then struggled with his wind the rest of the season, and coach Kevin Stefanski missed the playoff game in Pittsburgh after testing positive.

The league has severely reduced protocols this year for players who’ve been vaccinated. Those who aren’t vaccinated must continue to test daily, wear masks, can’t eat with teammates and can’t leave the hotel on the road.

Teams that reach a threshold of 85 percent of players vaccinated are also expected to benefit from fewer restrictions. Browns owners Jimmy and Dee Haslam have been strong advocates for the vaccine, and the team is close to the 85 percent threshold, a league source said.

“It definitely poses a competitive advantage for higher vaccine rates on your team just because of the close contact (rules) and what happens if somebody does unfortunately get COVID, what can happen to the rest of the building,” he said. “It’s a competitive advantage but it’s also way more than that. It’s about safety and just general health and well-being of human life.”

An unanswered question with training camp set to start is if Mayfield and the Browns will agree to a contract extension before the season. In April the Browns exercised his fully guaranteed $18.858 million fifth-year option for 2022 but can sign him to a long-term deal at any time.

Both sides are open to a deal, though neither seems in a rush, especially with Ravens quarterback Lamar Jackson and Bills quarterback Josh Allen — members of the 2018 draft class in which Mayfield was the No. 1 pick — also yet to sign extensions.

“I genuinely do mean that I’m about winning and I think everything will play itself out,” Mayfield said of blocking out anxiety regarding the extension. “I’m not worried about it at all because if we win we’re headed in the right direction.”

Browns executive vice president and partner JW Johnson and legendary quarterback Bernie Kosar supported Mayfield at the camp attended by more than 300 kids. Kosar gave a speech and threw passes to campers while Mayfield covered. Mayfield didn’t give an inch and celebrated his breakups.

He’s got the same philosophy for the Browns season.

Mayfield does take comfort in having the same coaching staff and system for a second straight year for the first time in his four-year career. Stefanski and coordinator Alex Van Pelt can expand the playbook as opposed to teaching it for the first time.

“The same system gives me more confidence, the same guys around me also gives more confidence, just because I know how to push those guys now,” Mayfield said. “Definitely going into minicamp, I think all the coaches and the players saw that I was way more comfortable in the system again but just hitting the ground running. I think not to say that we’re going to start off right where we left it, but that’s always the goal is to continue to improve and build on what we have.”

Mayfield made huge strides coming out of the midseason bye last year after he, Stefanski and Van Pelt huddled and the offense was streamlined to what Mayfield did best. He completed 63.9 percent for 2,049 yards, 11 touchdowns, an interception and a 100.1 passer rating in the eight regular-season games after the bye, finishing the season with a 62.8 completion percentage, 3,563 yards, 26 touchdowns, eight interceptions and a 95.9 passer rating.

He sees areas for improvement this year.

“Obviously early in the year we have to be a lot better,” Mayfield said. “I think more consistent. When we get a lead, keep the aggressiveness, stay ahead, don’t let teams back in the game. 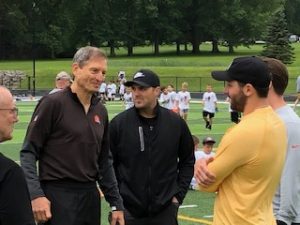 “First thing I’d say is we have a lot of great players. And this is not taking anything away from them because I love these guys, but it doesn’t matter who we have — if we don’t have chemistry and we don’t do our jobs, none of it matters,” Mayfield said. “But for me it’s just about going through my reads and distributing the ball, knowing that I do have those playmakers and letting them do the work. I don’t have to do too much at all. I’ll let them handle that.”