Odell Beckham Jr. says something special’s going on and “Cleveland needs a championship” 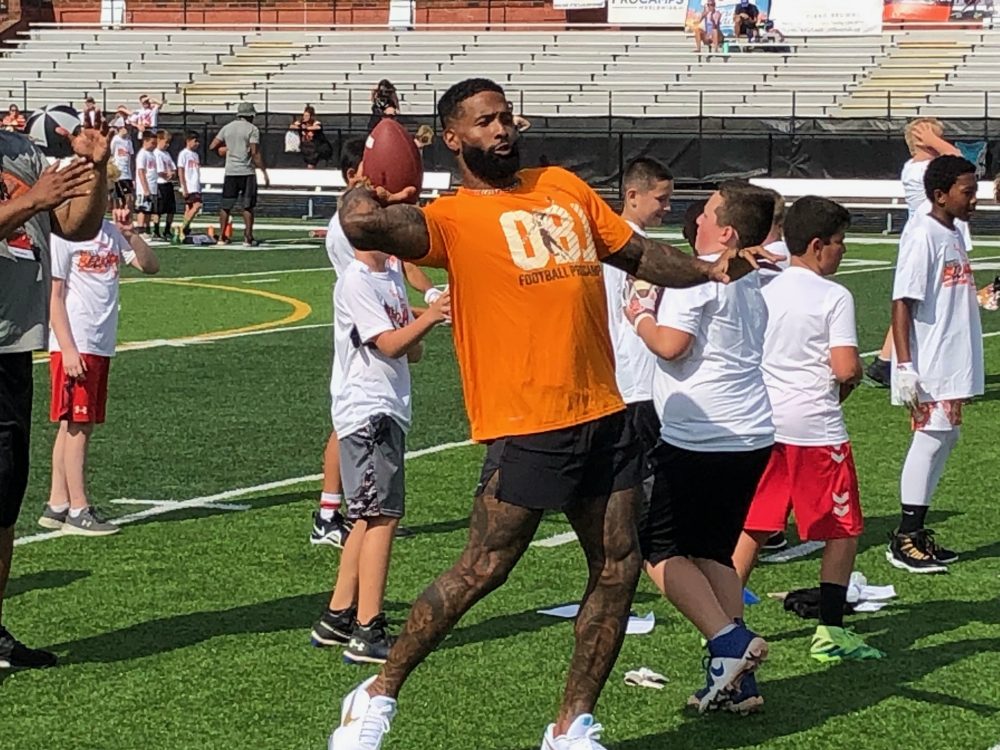 GATES MILLS — The motivation was simple for Odell Beckham Jr. during his rehab from a torn anterior cruciate ligament.

“The only reason to do this is to get one of them rings,” the superstar receiver said Sunday when asked about winning a Super Bowl.

The inspiration was clear as he went through the tedious and painful physical therapy sessions and the grueling weight room, treadmill and on-field workouts after the season-ending injury Oct. 25 against the Bengals and surgery Nov. 10.

“I came back for a reason,” Beckham said during a break at his youth football camp at Gilmour Academy. “I feel like we have a special opportunity. I was down in Austin with Bake (quarterback Baker Mayfield) and seeing him a few times since then, just kicking it, hanging out. It’s just something that feels special about this team.


“As I said when I first got here, I wanted it to be like the Patriots. You want to win Super Bowls. I think that there’s something special going on. There’s something special with this city. Watching the Bucs win a championship inspires you even more. Cleveland needs a championship, and I think that’s the goal, that’s the mentality in that building and that’s what I want to be a part of.”

The 22-17 loss to Kansas City in the divisional round of the playoffs hit Beckham differently. He had already missed nearly 11 full games, including a wild card win at Pittsburgh, but the narrow loss that kept the Browns from their first AFC championship game appearance in 31 years really stung.

“I watched (my teammates) compete last year, and the one game that hurt me the most is watching Kansas City and feeling like, man, I know that I could have made one play, just something to help the team,” he said.

Beckham was off to an uneven start in 2020, his second year with the team but first in coach Kevin Stefanski’s offensive system. He caught 23 of 43 targets for 319 yards and three touchdowns, adding three rushes for 72 yards and a score. He reminded everyone of his ability to take over a game with three touchdowns in a Week 4 win at Dallas.

“I think just the things that I’m able to do on the field, which is it can be one play, it can be two but I feel like I make the most of those plays,” Beckham said. “I make very dangerous plays. That’s just what I want to be able to add.

“They’re scoring 40 points a game and you’ve seen how the offense starts to click. It’s a new team, new coach, and I think it was just a matter of time before the thing got rolling, which it did. So I’m excited to be back, be a part of that and just compete at a high level again. I’m in a different place mentally this time.”

He looked healthy and dynamic in minicamp in June and teammates continue to rave about his recovery.

“He’s in fantastic shape and he’s ready to go,” best friend and fellow receiver Jarvis Landry said before minicamp. “He’s already doing some things that will blow your mind away.”

“About a month ago I would have said that he looks very, very good, and I know after speaking with him that he feels even better,” Mayfield said Wednesday at his youth camp.

But Beckham wouldn’t say when he expects to be full-go. The first training camp practice is Wednesday.

“At this point we’re just running our race,” Beckham said. “Whenever the team, the docs, my team, everything gets cleared, we’ll be ready to go. So whenever that is, Week 1, Week 17, I don’t know. Whenever we’re ready we’ll be ready.”

He’s adopted a different philosophy in this comeback. He had a broken ankle in 2017 with the Giants and played through a core muscle injury in 2019 that required surgery after the season.

“I think what I used to get caught up in — which led me down a path I won’t go to again — is you get hurt and we’re all men and we want to show everyone we’re a man and we want to come back” he said. “It (becomes) all this ego challenge. I’m not really in it for all that anymore because I don’t feel like I really have anything to prove except to myself and me wanting to be the best.

“I did want to have the fastest comeback ever and all these things but then I’m like, what accolade is that really? I want to be able to have the best season I can possibly have. That’s why I say we’re just running our race and whenever the time is, I will be ready.”

The grind to make it back is as much mental as physical. Beckham believes he’s also gotten better in that area.

“I think people don’t really have an understanding or an idea of what it feels like, to put in every single thing, to give up offseason after offseason for hard work and then to have your season ended short for things that just happen,” he said. “For me, this one felt different.

“I’ve shattered my ankle, had the hernia surgery, so it wasn’t the first time I had surgery. And I felt like the third time’s the charm and this one kind of balanced me out, but more so for my mental side, me being able to reflect on decisions, myself, life, whatever it is, and make adjustments within myself. And there’s just been so much growth. I’m just in a different place, just very, very excited to be back.”

While he wouldn’t get specific on when he’ll be 100 percent, he was clear he’s happy with the progress.

“Everything’s feeling great. For being at the 8½-, nine-month mark I’m doing very well in all the progressions,” he said. “We’re just running a certain race. So everything’s going well.

“I can’t wait to be back and be able to do more football stuff. Just excited to be back, excited to see all the boys.”