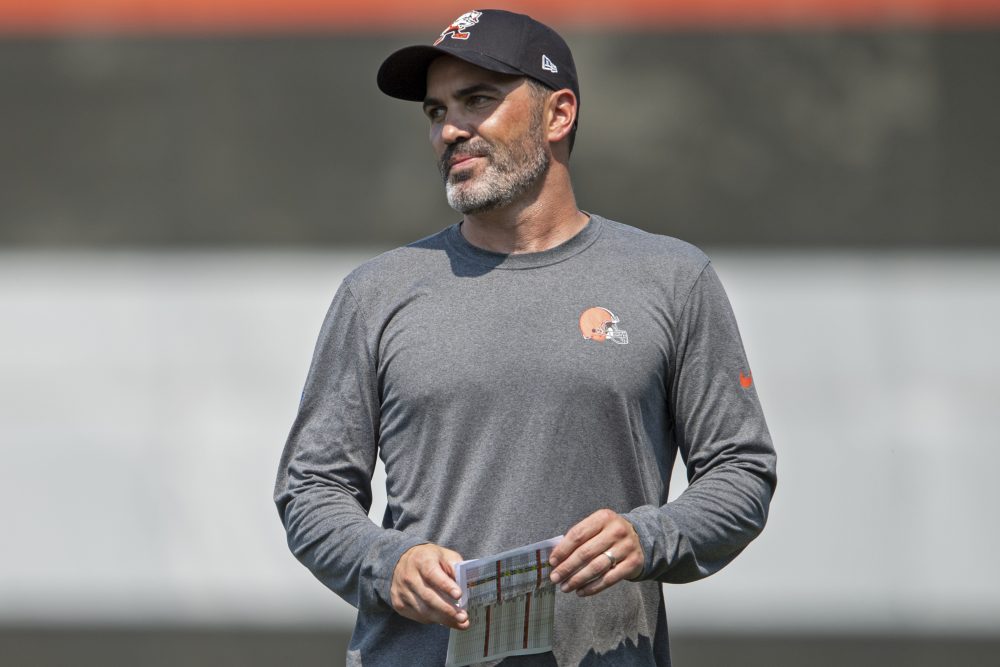 BEREA — The Browns’ shortest offseason in more than 25 years felt like the longest for impatient fans.

The Browns reached the second round of the playoffs for the first time since after the 1994 season, playing into the middle of January. The anticipation for a new season has grown exponentially over the last six-plus months.

The first day of training camp Wednesday marked an end to the wait.

And the beginning of what many expect to be a march to the organization’s first Super Bowl.

“The message has been pretty simple,” receiver Jarvis Landry said before practice. “It’s the same one that it’s been since the first day he got here — work. It’s in the work. Every sign that we see that’s one of the words that’s on there.”

Commentary: The football gods owe us one, and this might be it

The beginning of training camp is always met with buzz and barks from the rabid fan base. This year feels different.

The Browns return the NFL’s Coach of the Year and the entire starting offense. Superstar receiver Odell Beckham Jr. is back from a torn anterior cruciate ligament. The defense was remade in the offseason through free agency and the draft.

Not even the fresh memories of the disappointment of 2019, when a 7-8-1 finish in 2018 and the acquisition of Beckham had fans giddy with excitement, can slow this train. The Browns went 6-10 in 2019 and coach Freddie Kitchens was fired after one season.

“There is no difference. On paper, we look great, but that is just it — it is on paper,” All-Pro defensive end Myles Garrett said. “We have to go out here, we have to put the work in and we have to grind. We have to make sure that chemistry is there for when we match up with the Chiefs that first week. It all looks good, but we have to make it great out here day by day.”

The hype was out of control before the 2019 season, inside and outside the building. Stefanski has set a different tone.

“What you do day by day from training camp to the last day of the regular season is what defines you.”

Stefanski hasn’t changed in his second year in charge.

“He’s the same,” Garrett said. “He came in setting his precedent, setting his standard and (we’ve) been held to that and we’re not going to change. He’s not changing for any expectations that anyone else has set. He knows what we want to do and how good we want to be and we’ve got to work for it.”

The low odds to win the Super Bowl (16-to-1), the high over/under win total (10.5) and the intense attention from national media are further evidence last season wasn’t a fluke and the Browns have turned the corner to legitimacy.

“I promise you all 32 clubs talk about the Super Bowl. It is really easy to talk about it, it is hard to do. We are just going to focus on the work.”

The optimism is fueled by a collection of talent that ranks among the best in the NFL.

Quarterback Baker Mayfield, the No. 1 pick in 2018, can throw to Beckham and Landry or hand off to Nick Chubb and Kareem Hunt while arguably the best line in football blocks. On defense, Garrett is joined by newcomer Jadeveon Clowney to form an end tandem of former No. 1 overall picks, and the secondary was upgraded with the signing of safety John Johnson III and nickelback Troy Hill, the drafting of cornerback Greg Newsome II and linebacker Jeremiah Owusu-Koramoah and the return from injury of safety Grant Delpit and cornerback Greedy Williams.

Landry said it’s the most talented team he’s been on.

“It looks amazing,” Landry said of the rebuilt defense. “And we get the opportunity to compete against each other. When you bring in guys the caliber of guys we brought in, the competition level raises to another notch and that’s something that’s definitely important when you’re trying to go from good to great.”

Garrett has learned what it takes to reach the next level after a measure of success.

“Consistency and leadership,” he said. “We’ve had the talent and now we just got to put it together. Leadership, it helps to be the glue for all of that and just being consistent with the effort, with your preparation and with your leadership.

“But that’s the difference. You see that with the Bucs and the Patriots, they’re always consistent.”

Landry knows the jump from good to great will take work.

“You know what? I think it’s all hard,” he said. “It’s always kind of hard to take those next steps, but I think we’ve got a group of guys that’s going to challenge each other and have the work ethic and want to be great and want to go to the next level and it’s something that our team has. But it’s definitely hard.”