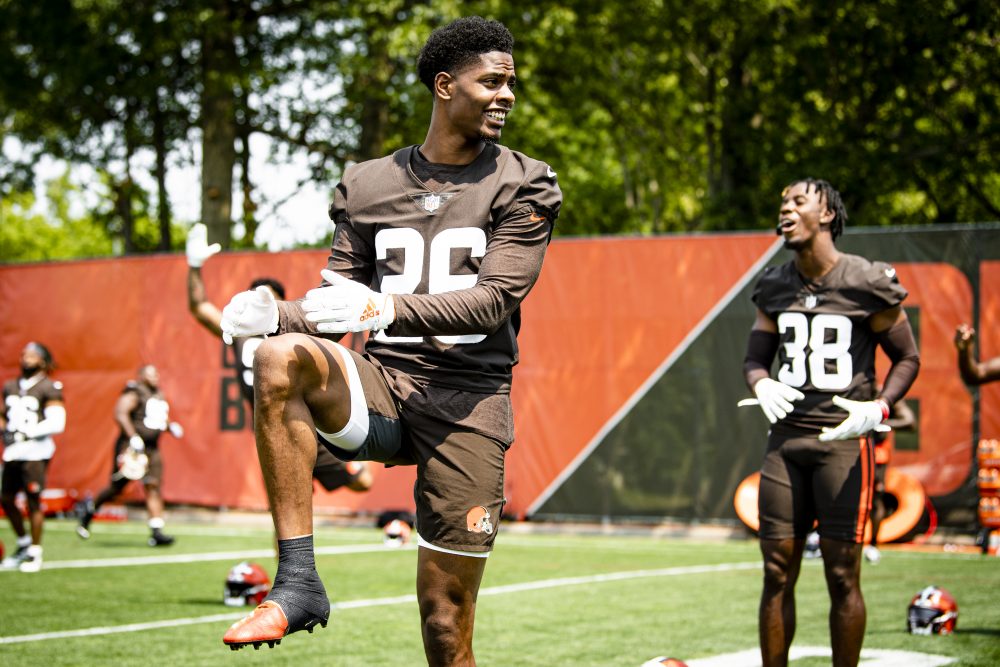 HELLO AGAIN: For the first time since the scouting combine in February 2020, coach Kevin Stefanski held an in-person news conference. He stood outside the team facility and talked to reporters for 17 minutes.

“Everybody is excited and everybody is happy to be back, so you know it’s good to be back on the grass with the guys,” receiver Jarvis Landry said.

NEWS OF THE DAY: Cornerback Greedy Williams walking off the field with an athletic trainer with 15 minutes left in practice wasn’t what anyone wanted to see on the first day — especially after he missed all of last season with a nerve injury in his shoulder suffered in camp.

But the early exit was heat-related and he’s expected to be fine.

“Trainers just said I look suspicious so they pulled me lol,” Williams tweeted. “I feel great and excited to be back out there.”

He had an eventful day before leaving. He got the first reps with the starting defense, broke up an out route to Rashard Higgins, then got beat deep by rookie speedster Anthony Schwartz.

CAMPER OF THE DAY: Receiver Odell Beckham Jr. didn’t have any highlight-reel catches and didn’t do much, if anything, in the 11-on-11 drills but he still owned the day. Nine months and three days after suffering a torn anterior cruciate ligament, he looked spectacular. He ran fast, cut hard and caught with ease.

PLAY OF THE DAY: Second-year receiver Donovan Peoples-Jones ran down the right seam and leaped over rookie safety Richard LeCounte III to haul in a pass from third-string quarterback Kyle Lauletta. A lot of people expect big things out of Peoples-Jones this year as he competes for the No. 3 receiver spot.

QUOTE OF THE DAY: “I know a lot of people have different opinions on that, with her being the best and saying it, admitting openly that she feels like she’s the best, and I agree. I don’t like that she did it but I believe that it took a lot of courage to do that, by admitting that mentally she didn’t feel like she was there and it was affecting her physical performance. It hurts to see that as a competitor, I wanted her to go through it, tough through it, but as a person, as a human being, you gotta be able to know when you reached your limit and you’ve got to be able to empathize with that.” — Defensive end Myles Garrett on Olympic gymnast Simone Biles withdrawing from the team event.

THURSDAY’S SCHEDULE: Practice starts at 2:25 p.m. but is closed to the public.

Training camp preview: Odell Beckham Jr. and other must-see players
Commentary: The football gods owe us one, and this might be it