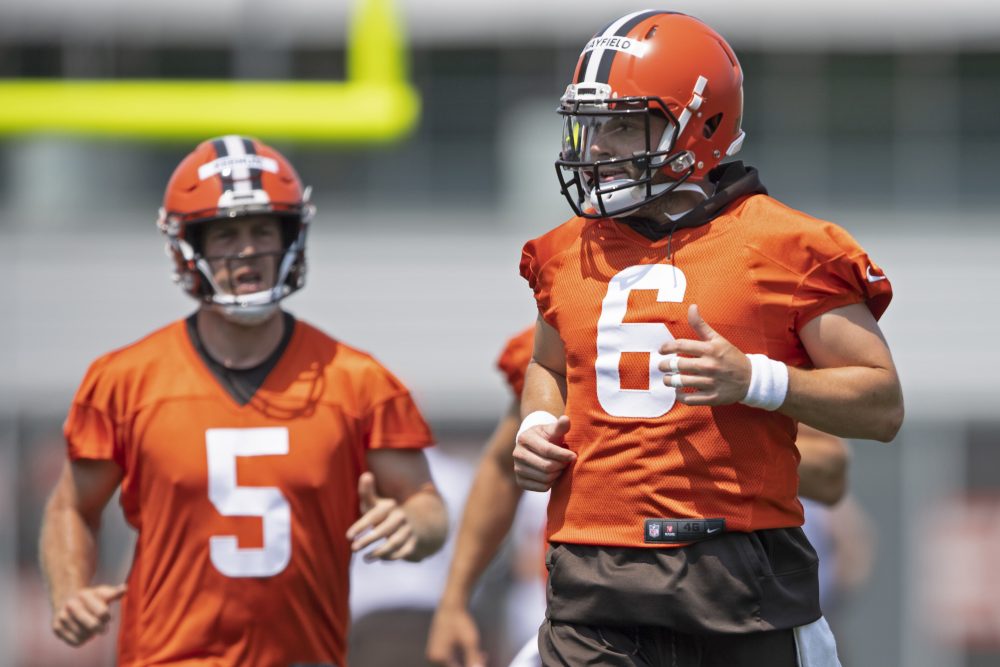 BEREA — Baker Mayfield isn’t satisfied with the improvement he made in 2020. He believes there’s a lot more where that came from.

“I can play a whole lot better than last year, I know that,” he said Thursday at training camp.

A second year in coach Kevin Stefanski’s system and with all the key players on offense will certainly help. So will the experience of three seasons and 48 games of NFL competition, including two in the playoffs in January.

The return of healthy and motivated receiver Odell Beckham Jr. might benefit Mayfield the most as he tries to establish himself in the upper tier of quarterbacks.


“When it comes down to the chemistry stuff, every rep matters for us, but then just the terminology and speaking outside the building, not just about football, that goes such a long way when it comes to chemistry and that trust factor,” Mayfield said. “We have made huge strides, and I know he feels the same way.”

The Mayfield-Beckham connection hasn’t been nearly as strong as the Browns hoped when Beckham was acquired in a trade from the Giants in March 2019.

Beckham didn’t practice much in 2019 due to a core muscle injury that required surgery after the season, and the offense regressed under coach Freddie Kitchens and his staff. Beckham played all 16 games despite the injury, catching 74 of 133 targets (56 percent) for 1,035 yards and four touchdowns — all career lows for a season in which he played at least 12 games.

Beckham returned healthy a year ago but sustained a torn anterior cruciate ligament in Week 7 chasing the defender after a Mayfield interception against the Bengals. In six-plus games, Beckham caught 23 passes on 43 targets (53 percent) for 319 yards and three touchdowns.

“Year 1, we were definitely just trying to get used to each other,” Mayfield said. “Last year, did not have a full season by any means because of the injury. This year, I think we have had our backs against the wall the two of us together. I think we can relate a lot on those types of things.

“You are right, having success is always sweeter when it is not just handed to you, it is not the easy road, you hit adversity and you have to battle through it. That is just the way of life, too.”

Mayfield was a two-time walk-on who turned himself into the undersized No. 1 pick in the 2018 draft and still carries a chip on his shoulder. Beckham had instant success in the NFL, winning Offensive Rookie of the Year honors and going to the Pro Bowl in his first three seasons as he became among the most recognizable people in sports. But a string of injuries began in 2017 and he hasn’t been back to the Pro Bowl.

Beckham said he’s in a better place mentally and made “so much growth” following the ACL tear. He hung out and worked out with Mayfield and other teammates in Austin, Texas, in the offseason and believes he and Mayfield have the chance to do something monumental this year.

“I came back for a reason. I feel like we have a special opportunity,” Beckham said Sunday at his youth football camp.

Mayfield and the offense were much improved following Beckham’s injury, and many observers attributed it to Mayfield not feeling pressure to force the ball to Beckham. Stefanski and Mayfield believe the improvement was independent of Beckham’s absence and just the natural progression of a first-year offense. Stefanski doesn’t see his return as a disruption.

“When he is healthy and he is part of this thing, he is dynamic football player,” Stefanski said. “He is going to be very much front of mind as we put our game plans together.

“I just look back at how much better we got offensively just us coaching. I thought we did a better job the second half of the year of explaining things and the nuances of our offense. I think we saw some of that growth, too. That is where you insert Odell into some of that, and he can be a really productive player for us. He is a great football player, and we are excited to get him back.”

Mayfield went 11-5 last year to snap the organization’s 18-year playoff drought and won at Pittsburgh for the first postseason victory in 26 years. He completed 62.8 percent for 3,563 yards, 26 touchdowns, eight interceptions and a 95.9 passer rating during the regular season. He was markedly better after the midseason bye, completing 63.9 percent for 2,049 yards, 11 TDs, an INT and a 100.1 rating.

“Where I was going with the ball — taking care of it, first and foremost — just progression, listening to my feet and trusting everybody on the field,” he said of the improvement. “Not trying to predetermine where I am throwing the ball based on coverage. Just reacting and going through that and distributing the ball to our skill players because we have a great group. My job is not to try and do too much or control the game. It is to get the ball out and into their hands.

“Now, I am truly hoping to make a huge jump taking care of the ball and being efficient.”

“He’s really the last year now turned a corner in his preparation,” Tretter said. “He’s always been a great leader for us, but I think even his leadership has taken a step, and that’s what you expect.