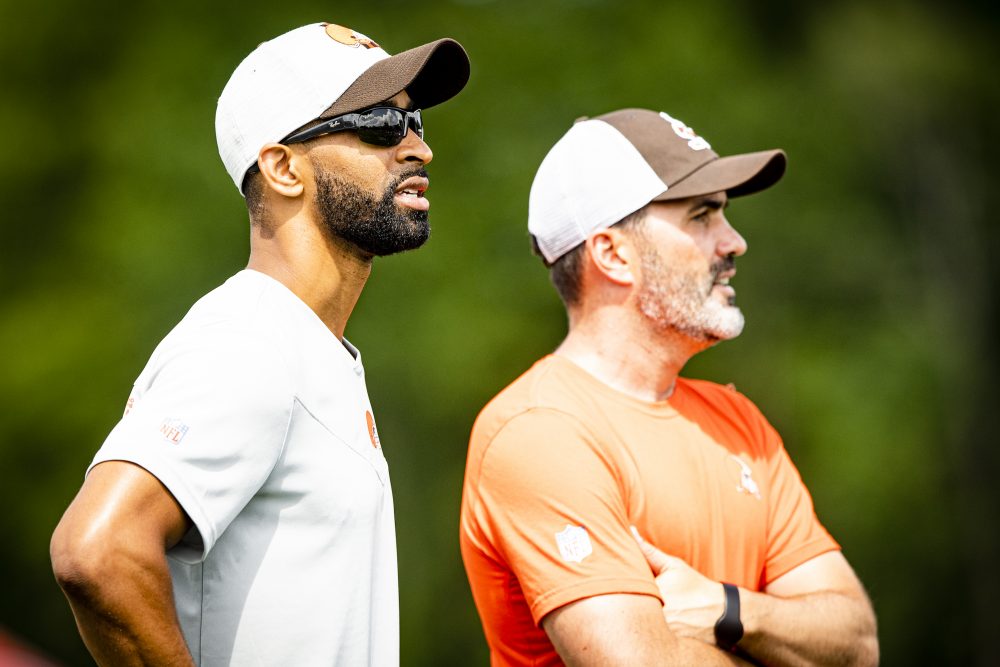 But Berry has yet to do much talking with Mayfield’s agents about a contract extension. The assumption remains that Mayfield will eventually sign a multiyear deal for more than $100 million, but neither the Browns nor Mayfield’s agents appear in a rush.

Berry stuck to his philosophy of not discussing individual contract situations in the media.

“I don’t think this is the most appropriate setting,” he said.

Mayfield is signed through 2022 after the Browns picked up the fifth-year option on his rookie contract in April. An extension could happen before the regular season starts Sept. 12, during the season or next offseason.

Extensions are usually reached before the season, and some teams don’t like to negotiate once it’s begun, but Berry left the door open.

“We’re not that dogmatic in any particular philosophy in that regard,” he said.

Notes: Browns happy to have fans back at camp

Running back Nick Chubb, cornerback Denzel Ward, right guard Wyatt Teller and safety Ronnie Harrison Jr. are also eligible for contract extensions. Mayfield and Ward are signed through 2022 because of the fifth-year options, but the others are scheduled to become free agents in March.

Chubb and Ward said in June that talks had begun and they want to stay. Berry referred to all of them as “good players, good people.”

“Those are always good problems to have as a GM,” he said of the number of quality players under consideration for extensions. “It certainly does create challenges at certain points in the year, but that is part of the job.”

Defensive end Myles Garrett signed a five-year, $125 million extension in July 2020, but Berry said the lack of any extensions yet this year isn’t a reflection on the players.

“Each situation is unique. I wouldn’t read anything into it either way, without going into specifics for any individual,” he said.

Berry acknowledged hard feelings can develop on both sides if extensions don’t work out at the desired pace.

“It’s one thing that we certainly try to do our best to communicate with all of our guys, whether it’s a contract situation or not,” he said. “But we certainly understand that sensitivity.”

Ward, who went to Nordonia High School and Ohio State, said he didn’t know if progress had been made in negotiations and he’s not focusing on the contract.

“Our guys are professionals,” he said. “When you are in the building and you are between the white lines, you have a job to do. Everybody has agents — I have one — so you let them do their jobs. We focus on what is going on on the field and in the meeting rooms.”

The drop in the 2021 salary cap because of the pandemic season a year ago has made things trickier, but the Browns have $19 million in cap space heading into the season. As the quarterback, Mayfield will command the largest deal, so Berry and the cap department must account for that in the long-term planning.

“So it does create different trade-offs, but no different than any high-priced player.”

Mayfield improved dramatically in the second half of last season, leading the Browns to the playoff for the first time since 2002. He threw 11 touchdowns and one interception over the final eight regular-season games.

He’ll be in Year 2 of Stefanski’s system, and the entire starting offense and its top reserves return.

“We feel really good with Baker’s progress,” Berry said. “He’s made a ton of growth both on and off the field. We’re looking forward to him having another fantastic season.

“Baker has entered with a phenomenal mindset, a ton of comfort. I know we’re all very excited for him to have a bit of stability. If you’re doing something repetitively or you have a little bit of foundation from prior experience, it just makes you that much more comfortable, and I think that’s something that we certainly notice with him.”

He was asked what’s the next step for Mayfield.

And the new deal will get done.