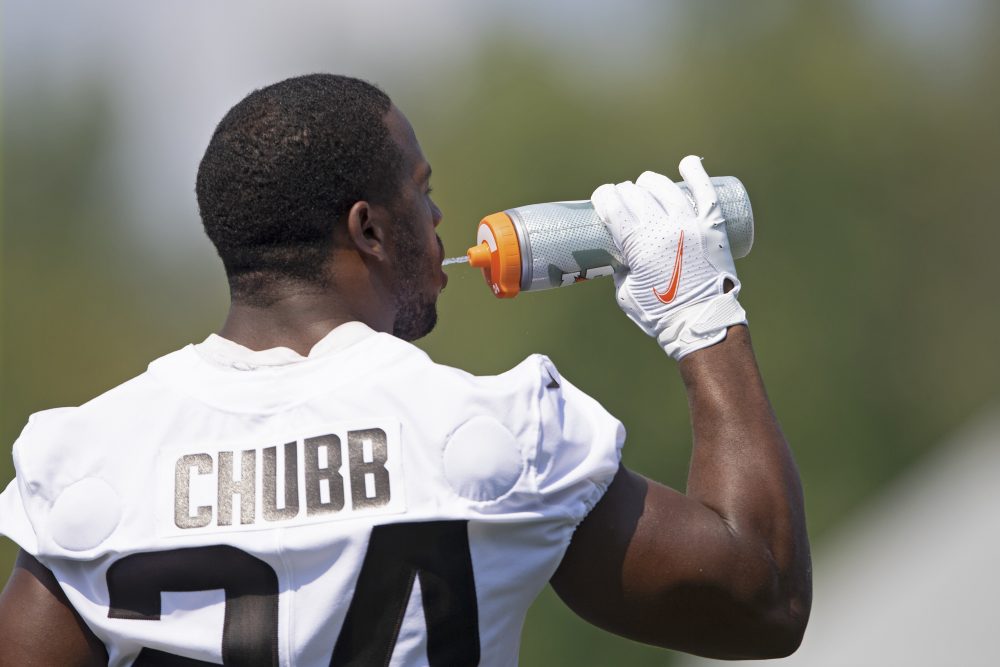 BEREA — Nick Chubb usually reserves his Instagram account for weight lifting videos, Batman quotes or pictures of him in a Browns uniform.

Over the weekend, after agreeing to a three-year, $36.6 million extension that was signed Monday, he posted pictures of his left knee following surgery in 2015 after he tore posterior cruciate, medial collateral and lateral collateral ligaments on a run for the University of Georgia against Tennessee.

The caption read: Came a long way. What he thought about during the grueling rehab has come true almost six years later.

“Yeah, it has,” Chubb said. “I can say it has now, but back then, it was a little blurry for me. I wasn’t sure how things would turn out, if I’d ever be the same player or if I’d ever play again.

“So that’s just things I always hold onto in the back of my mind, just knowing where I came from and knowing where I want to be. I can say through the help of friends, family and God, I’m here now in a blessed position.”

He said in June he wanted to stay in Cleveland and meant it.

“It means everything,” he said. “I love it here in Cleveland. I love this team. I love the coaches. I love the position I’m in. I can’t ask for anything better than where I’m at.”

Chubb’s deal includes $20 million guaranteed and will keep him with the Browns through 2024. The $12.2 million a year average ranks sixth among NFL running backs, but he wasn’t concerned about chasing the last dollar.

“I’m happy with how things went. It looks good to me,” Chubb, 25, said. “What’s more important to me is just going out there and getting that done and focusing on my team and focusing on the season.”

Chubb is the type of player and person the Browns want as a foundation of the roster and they made sure he will be sticking around as they try to win their first Super Bowl.

“From the day Nick Chubb first entered our facilities, it was clear to see that he would become a pillar of our organization,” general manager Andrew Berry said in a news release. “Although Nick may be a man of few words whose strong-and-silent demeanor can be easy to overlook from the outside, his actions over the past three years have reverberated within the walls of our building.

“He is a dynamic runner who is on pace to be one of the most accomplished players to ever don an orange helmet at the position. But it’s his work ethic, intelligence, toughness and selflessness that makes us proud that he represents our city. Quite plainly, Nick embodies the soul of our team and we are thrilled that he will be a Cleveland Brown for years to come.”

Chubb, the No. 35 pick in 2018, has twice been the team’s nominee for the NFL’s Art Rooney Sportsmanship Award and was voted the team’s Ed Block Courage Award winner in 2020.

“A great player. An even better person,” owner Jimmy Haslam said. “(There are) very few people I have met like Nick Chubb.”

The praise from his bosses and teammates is appreciated.

He’s the first Cleveland player since Hall of Famer Jim Brown to rush for 1,000 yards in two of his first three seasons and ranks sixth in Browns history in rushing yards and seventh in rushing touchdowns.

He does it with breakaway speed and brute force.

“It feels good because I know I’m doing good for my team, making explosive plays, getting momentum going,” he said of running over defenders. “That’s just what I pride myself on, being a strong runner, that’s just how I run the ball.”

The Browns gave No. 2 running back Kareem Hunt a two-year, $12 million extension last year that runs through 2022. He pleaded in June for the Browns to pay Chubb, who’s become one of his closest friends.

“Kareem said Wagyu steaks on me,” Chubb said. “That’s all he keeps saying. I know he’s excited, and I’m excited, too. Get out there and me and him get back going like we have been.”

Coach Kevin Stefanski is glad to know he’ll have Chubb in the backfield for the next four years setting an example for the rest of the locker room.

“It is a business, so you can’t keep everybody,” he said. “But certainly in moments like this when you reward a guy like Nick, I think it probably does send a good message.”

Linebacker Anthony Walker Jr. said he saw the Chubb news on his phone Saturday after he came out of a meeting.

“That’s pretty awesome when you see guys put the work in and get rewarded for it,” he said.