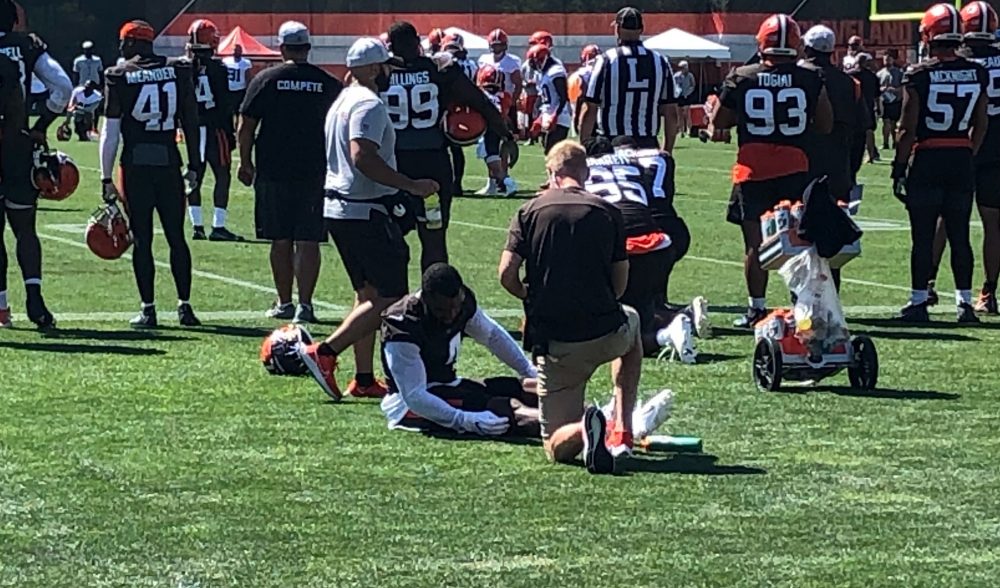 BEREA — Anthony Walker Jr. seemed like the one certainty in an unsettled linebacking corps. He signed a one-year, $3 million deal as a free agent in March to start in the middle and was given the job of calling the defensive signals.

The outlook seems a lot less certain after he limped off the practice field Monday during training camp.

He pointed to the back of the right knee and was examined by Joe Sheehan, head of the athletic training staff. Walker eventually walked into the field house joined by Sheehan.

The team announced it was a knee injury and will likely provide an update Tuesday.

Jacob Phillips, a third-round pick in 2020, would take his spot in the middle. He played nine games as a rookie, starting three, and totaled 25 tackles as he battled a knee injury.

The rest of the linebackers are varying degrees of unknown.

Rookie Jeremiah Owusu-Koramoah was picked in the second round but has been out since Sunday on the COVID-19 list, and fifth-rounder Tony Fields II has also missed all of veteran camp after hurting his foot when the rookies reported.

Sione Takitaki and Mack Wilson are entering their third seasons, but their roles are undefined, and veteran Malcolm Smith is back after re-signing in March.

Walker spoke to reporters before practice and was excited about playing behind defensive ends Myles Garrett and Jadeveon Clowney.

He broke down the importance of setting the edge of the defense to make life easier on the linebackers.

“So the best way to explain that is the field is very, very wide,” Walker said. “You have to tackle Christian McCaffrey, you have to tackle Saquon Barkley, Tyreek Hill, all those guys like that that are really, really fast. So if I know I have a good D-end on this side, a good D-end on that side — great D-ends on both sides — and they put their arm out and the tackle can’t go anywhere, so the edge is set on both sides, now the runner has only very minimal distance to work with. And they’ve got to come straight ahead. So now I only have to go one or two steps here, one or two steps here, and then, boom, tackle. Or if they do run outside, good luck.”

Walker, who turns 26 Sunday, was a three-year starter for the Colts, who let him leave in free agency. In 57 games, he totaled 343 tackles, 19 for loss, 11 passes defensed, 3.5 sacks, two fumble recoveries and a forced fumble.

He’s part of a new-look defense that could feature nine new starters but isn’t worried about a steep learning curve.

Coach Kevin Stefanski isn’t surprised Walker was able to pick up the system and take on a leadership role so quickly.

“That is who he is, and we knew that,” Stefanski said. “He is the son of a coach. He was the kid hanging around with the water bottle when he was 5, 6 and 7 years old at practice. He is a gym rat so, no, I am not surprised.”

“I think we will get him back soon,” Stefanski said.

** Safety Ronnie Harrison Jr. (hamstring) worked on the side. Stefanski said he’d be out for an “undisclosed number of days.”

** Rookie receiver Anthony Schwartz (hamstring) also worked on the side. He didn’t practice in minicamp in June with a hamstring injury.

** Safety Sheldrick Redwine tweaked an ankle, had it taped and stayed on the field.

** Safety Grant Delpit has yet to participate in team drills. He missed all of last season with a ruptured Achilles tendon.

** Owusu-Koramoah could come off the COVID-19 list this week.

Defensive tackle Jordan Elliott, a third-round pick in 2020, spent the offseason focused on running. He “transformed” his body and got a step quicker, according to left guard Joel Bitonio.

“He’s in the 285 range right now, but we want him to play closer to 290-3(00), something like that, where he’s not going to get bounced around,” defensive line coach Chris Kiffin said. “But he is a really strong kid. What he felt like last year was he couldn’t turn and run and be consistent play to play getting after ball carriers downfield, things like that. So he challenged himself in that area and I’m proud of him for that.

“Now it’s just about maintaining, putting on some good weight as we work through training camp and not getting lighter.”

Elliott played 29 percent of the snaps last season, starting one of 16 games. He had 15 tackles and no sacks, but Kiffin saw enough to know he’ll be part of the rotation this year.

“Absolutely. Super excited about Jordan,” he said. “You’ve got to remember, Jordan didn’t have an offseason last year and hardly a fall camp. And so when we’re looking at cutups, I feel bad that he didn’t get coached more. Because he got thrown in as a rookie, and that’s tough as an inside guy your first year.”

Kiffin called new defensive tackle Malik McDowell (6-foot-6, 295 pounds) the “biggest guy on the field,” and he stands out even among the trees. The question is whether McDowell can stay healthy, stay out of trouble and get back in the swing of things.

He was a second-round pick of the Seahawks in 2017 but has never played in the NFL. He suffered a head injury in an ATV accident a couple of months after being drafted, missed the 2017 season and was waived by the Seahawks the following year.

He was sentenced to 11 months in jail and three years of probation in November 2019 after pleading guilty to a series of crimes in Michigan.

“(He has) size and athleticism and he’s hungry,” Kiffin said. “This is a shot for him. What he does with it really depends on him and his commitment day to day. So right now we’ve been very pleased with him.

Crowd noise blared through the speakers. Stefanski wants the offense to get used to the noise after not playing in a full stadium on the road last year.

** Rookie running back/receiver Demetric Felton continues to get a lot of touches.

** Punter Jamie Gillan tried to drop kicks in a garbage can on the sideline from 50 yards. He came within 2 yards with one kick, then was long on the next two.

** Receiver Alexander Hollins got behind cornerback Greedy Williams on a post but dropped a great throw from Baker Mayfield.