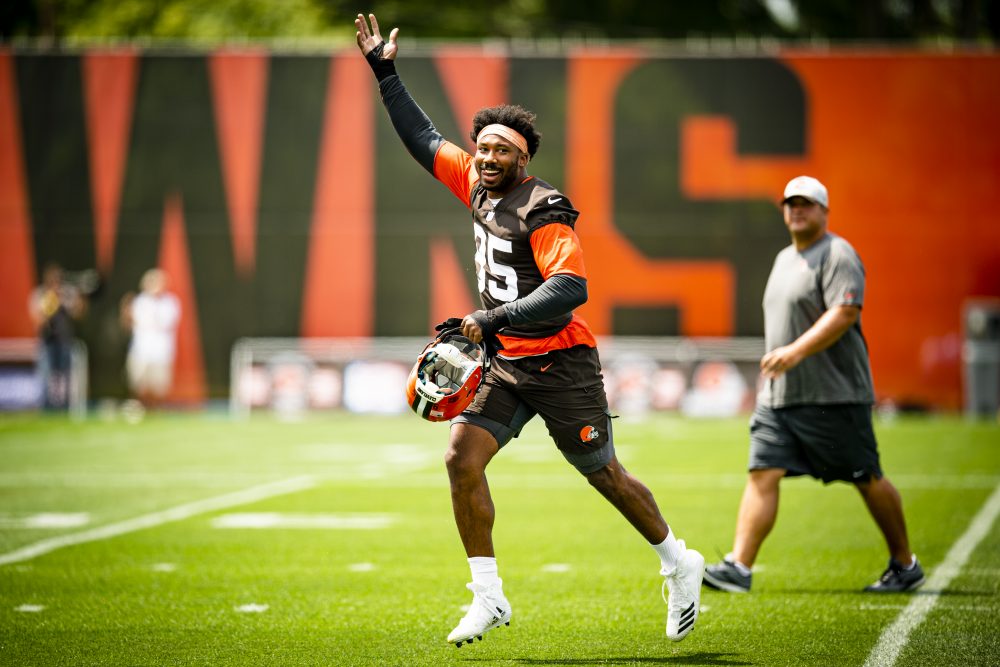 WE’RE TALKING ABOUT PRACTICE: The Browns will practice Sunday at noon in front of fans at FirstEnergy Stadium. But the traditional Orange & Brown Scrimmage has been replaced by the Orange & Brown Practice.

“Any time you are under the lights or you are in the stadium, certainly, you say ‘scrimmage,’ but it is going to be more of a practice,” coach Kevin Stefanski said. “We will have some team drills against each other, but it will not be your typical scrimmage like a spring game type of thing.”

NEWS OF THE DAY: Running back Nick Chubb signed his three-year, $36.6 million extension, making it official.

Starting middle linebacker Anthony Walker Jr. limped to the sideline with an apparent knee injury, walked into the field house and didn’t return.

CAMPER OF THE DAY: Receiver Rashard Higgins got over his rolled ankle in a hurry. Higgins didn’t practice Thursday after twisting the ankle on the first day of camp. He was back in team drills Monday and caught a deep corner route from Baker Mayfield among other receptions.

PLAY OF THE DAY: Mayfield tried to run a bootleg to the left. Defensive end Myles Garrett wasn’t having it.

He gave chase and would’ve gotten Mayfield before he turned the corner if touching the quarterback were allowed. As they ran off the field, Mayfield jokingly lobbed the ball in the direction of Garrett.

QUOTE OF THE DAY: “I approached this, coming to Cleveland, how I approach everything else. I was coming here and I was going to work and I knew people would take notice of that eventually. And that’s what happened.” — Chubb on the scene from “Hard Knocks” of him being ignored at baggage claim at the airport.