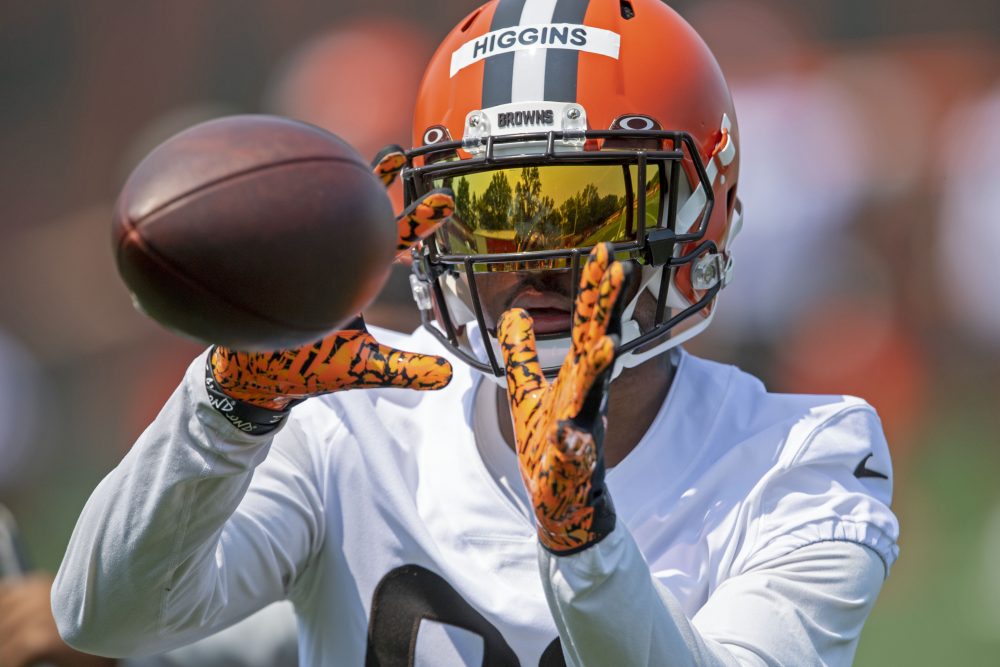 The game against the Chiefs in January ended Higgins’ first trip to the playoffs and he was on the wrong end of the pivotal play, yet he keeps flipping on the 22-17 divisional round loss in Kansas City.

“I rewatch it all the time,” he said Tuesday before practice.


He focuses on the end-of-half drive in which he gained 25 yards on a catch-and-run but fumbled out of the end zone for a touchback after helmet-to-helmet contact from safety Daniel Sorensen. The likely touchdown never happened, and the Chiefs kicked a field goal to lead 19-3 at halftime.

“We needed a spark,” said Higgins, who had five catches for 88 yards. “I felt the majority of the battles I had that game, I won them, but I could have done at a higher level. I had a couple mental errors, but moving forward, we got them Week 1, so I’m trying to eliminate them.”

While many would reach for the remote if they stumbled upon the replay, Higgins is drawn to the game.

Coach Kevin Stefanski said he’s probably watched the loss more than Higgins as he prepares for the rematch Sept. 12 in Arrowhead Stadium. He doesn’t get emotional.

“No, I know the ending,” Stefanski said. “The motivation is showing up every day and trying to get better.”

Higgins played a key role down the stretch last year, moving into a starting spot after Odell Beckham Jr. was lost for the season in Week 7 with a torn anterior cruciate ligament. In the final nine regular-season games, Higgins caught 32 passes for 546 yards, two touchdowns and a 17.1 average. He finished the season with 37 catches for 599 yards, four TDs and a 16.2 average.

His goal for this camp is to know the ins and outs of every receiver position.

“I mainly played X when Odell went down. I want to give myself more room to play every position,” Higgins said. “I want to know everything, I want to know why we’re doing this. Knowing more of the playbook is something I definitely want to learn this camp.”

The versatility should help him in what’s shaping up as a fierce battle for playing time behind starters Beckham and Jarvis Landry. Donovan Peoples-Jones is in the discussion for camp MVP through a week, and KhaDarel Hodge and rookie third-rounder Anthony Schwartz are also in the mix.

“We all can ball, we’re all out here for one goal in mind, and that’s to get this job done and get it done at a high level.”

Higgins doesn’t have any of that. But he does have reliable hands, a knack for making plays and a connection with quarterback Baker Mayfield.

Where does the chemistry come from?

“You gotta ask God, bro. I don’t know,” Higgins said. “It’s just smooth. Baker’s my guy and when you need a play, man, you can call God and then you can call me.

“Me and Baker, we’ve got a good connection with each other. He’s my boy. We’re just out here playing backyard football at times.”

Higgins, 26, opened last year buried on the depth chart and was a healthy scratch for two games before getting a chance. He took advantage and won over the new coaching staff.

“When I got here last year, he made a bunch of plays in practice and then he had to wait for his opportunities last season,” Stefanski said. “While he was waiting, he was busting his butt on special teams or the look team or whatever. He is really a guy who has done everything that has been asked of him.”

“We got it. We just have to put it together,” he said. “Put it together and synchronize everything. Y’all gonna see on Sundays.

“Man, if we’re not going to the Super Bowl, then we should not be talking. That’s the goal. That’s the expectations.”

The road again runs through Kansas City, which has been to the last two Super Bowls.

“We got the taste for it now,” Higgins said. “Just moving forward, that’s a little motivation. We know where we stand and how far we can go. We competed with the best. It sucked it ended like that, but it’s motivation going into this year.”

He thinks it’s a good thing to open against the Chiefs.

“I love it,” he said. “It’s the biggest challenge right now. So that’s a great football team, I know they’ll be ready to play, and we’ve got to come ready to play.”

Baker Mayfield knows he can play “a whole lot better,” believes improved chemistry with Odell Beckham Jr. will make a difference
Jadeveon Clowney has fun when he’s healthy, and he’s having blast in impressive start to camp