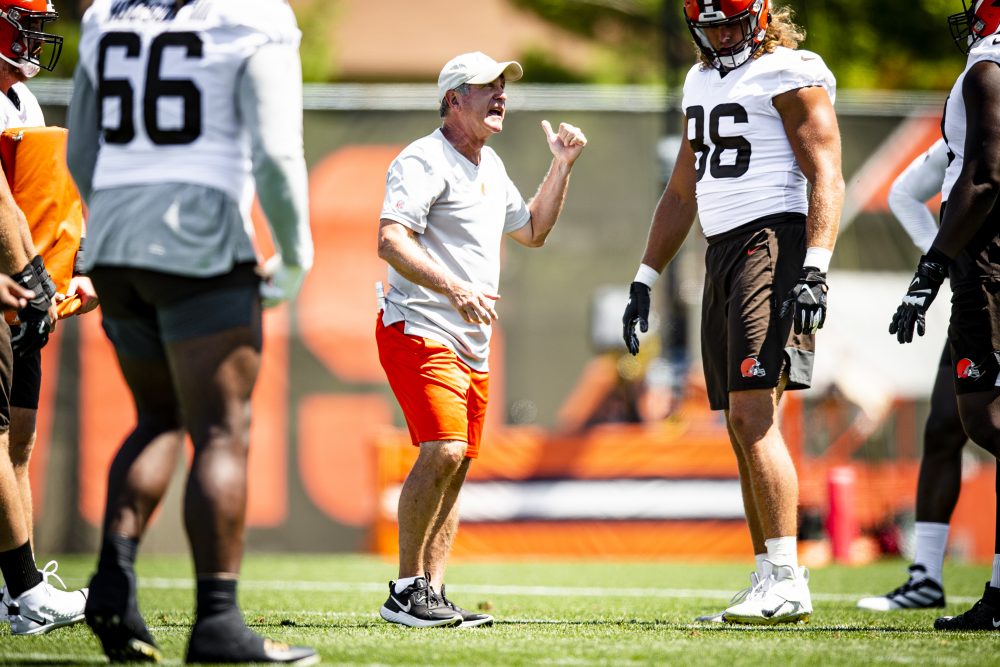 NOT MESSING AROUND: Offensive line coach Bill Callahan, who turned 65 Saturday, still brings it strong every day. Callahan is a constant taskmaster, demanding proper tempo and technique from his linemen. He’s got a loud voice and can be heard yelling a field away.

It may be a Callahan rule or a coach Kevin Stefanski rule, but Drew Forbes was yanked from the lineup and did pushups after a false start in a team drill.

NEWS OF THE DAY: The two LSU alum who spent last year rehabbing together are at different stages in their returns.

Cornerback Greedy Williams was declared “good to go” by Stefanski and participated in team drills with the players in pads for a second straight day. There weren’t any tackling drills but still contact, which is a milestone after Williams missed all of last season with nerve damage in his shoulder.

Safety Grant Delpit is not ready. He sat out a second straight day, which hadn’t been the pattern in his return from the ruptured Achilles tendon that cost him his rookie season. His upper leg was wrapped Tuesday, which could be the cause for the pause.

Jeremiah Owusu-Koramoah doesn’t think missed time was a setback, ready to do some hitting

He caught a 60-yard touchdown from Baker Mayfield after a double move that froze cornerback A.J. Green. He had a strip, scoop and score on a punt coverage drill. He picked up a first down on a pass from Case Keenum in the move-the-ball period.

PLAY OF THE DAY: Linebacker Sione Takitaki had the interception in a one-on-one passing drill. He tipped the pass over the middle intended for running back Nick Chubb and was poised to grab it. Instead, he juggled it and Chubb stepped in and completed the catch.

QUOTE OF THE DAY: “I thought they practiced really hard. It was physical, but they didn’t take any kill shots and they helped each other. If a guy is in a precarious position, you don’t finish him, those types of things.” — Stefanski on the debut of pads Tuesday.

THURSDAY’S SCHEDULE: The players are off. Practice Friday is at 2:25 p.m. and open to fans.