Donovan Peoples-Jones earned trust of coaches as rookie, then made “long list” of improvements before Year 2 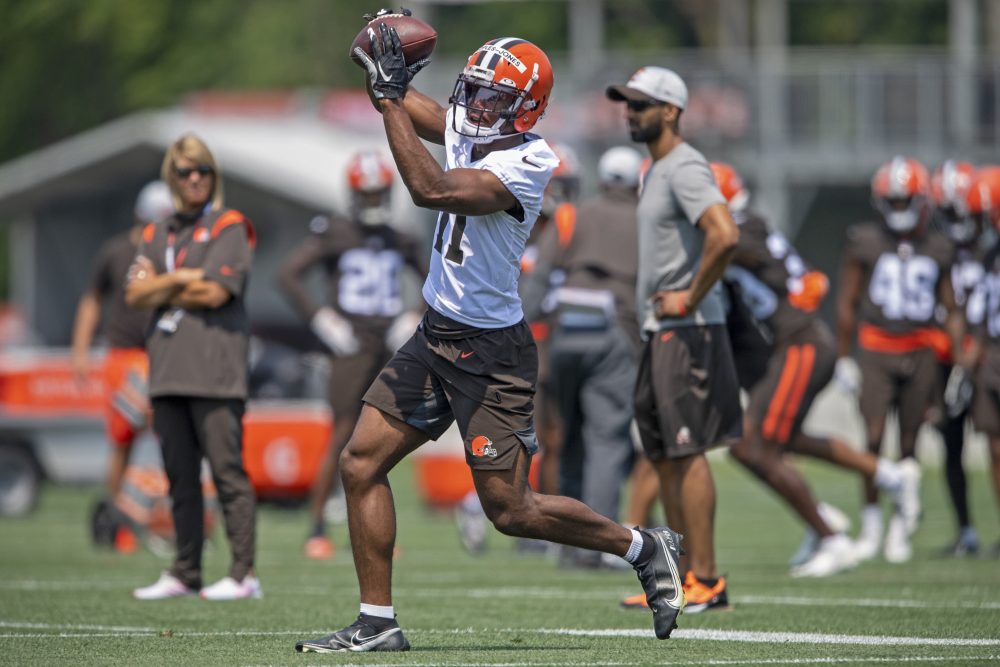 BEREA — Donovan Peoples-Jones sells the hook, gets cornerback A.J. Green to buy and blows past him for a long touchdown on the double move.

Peoples-Jones can’t shake No. 1 cornerback Denzel Ward on an out but goes low and makes the catch with Ward on his back.

Peoples-Jones runs the comeback along the sideline, jumps high for the sailing throw and snatches it out of the air like Shaquille O’Neal with a rebound.

A drill, let alone a day, doesn’t go by in Browns training camp without the second-year receiver creating a highlight and making general manager Andrew Berry look like a genius for drafting him in the sixth round, No. 187 overall. Peoples-Jones even forced a fumble, recovered it and scored on a punt coverage drill Wednesday.


Peoples-Jones doesn’t do much self-promotion — it’s hard to toot your horn when you don’t talk much — but he acknowledged improvement in a lot of areas from a promising rookie season.

“That would be a pretty long list,” he told The Chronicle-Telegram this week.

“With Donovan, just like everything, there was a long list that I couldn’t even talk about right now because I’d kill all your time,” he said Wednesday. “But I’ll tell you this, the things we asked him to work on, he came back and you saw progress in those things. That’s what’s most encouraging.

“Thus far in camp, he has made the most of his opportunities.”

Peoples-Jones is in a crowded competition for playing time behind starters Odell Beckham Jr. and Jarvis Landry. He’s got a clear early edge on Rashard Higgins, KhaDarel Hodge and rookie Anthony Schwartz for the No. 3 wideout rule, and is playing like someone who’ll be a starter in the not-so-distant future.

“Anytime a player is a second-year player, there should be a jump. It is his second lap around the track,” O’Shea said. “He has done an outstanding job of putting himself in position to have the opportunity to contribute here because of his work ethic.”

Jadeveon Clowney has fun when he’s healthy, and he’s having blast in impressive start to camp

Peoples-Jones has plenty of size at 6-foot-2, 204 pounds. He takes awhile to reach top speed, but it’s an impressive 4.48 seconds in the 40-yard dash. His 44.5-inch vertical jump and 11-7 broad jump confirm he has special explosiveness.

Quarterback Baker Mayfield said Peoples-Jones got into great shape during the offseason, and Peoples-Jones is off to the kind of start to camp he envisioned.

“Oh, yeah, for sure,” he said. “I just want to come out here every day and play good football.”

His expectations for Year 2?

“Just to be the best me possible,” he said.

How good can that be?

A trend has emerged from all the noteworthy plays through the first week-plus of camp: Peoples-Jones can secure the catch in traffic.

“That’s something that Donovan has worked extremely hard on is his ability to make contested catches,” O’Shea said. “He’s got good strength, that’s one of his characteristics within his skill set that is in his favor, and he needs to play to that.”

Peoples-Jones was friendly and polite during the one-on-one interview conducted on orange and brown Adirondack chairs under a test outside the team facility. Forthcoming, he wasn’t. He seems similar to running back Nick Chubb in various ways.

“Extremely impressive guy Donovan is,” O’Shea said. “He has great professionalism. He works extremely hard. He is outstanding in his assignment.

“He is somebody who just does not say a lot. He goes out there and does it by his actions.”

Peoples-Jones said he loves Cleveland and was able to get a feel for the city despite the difficult pandemic conditions of last season. He enjoys the museums and restaurants.

“I’m a big food guy. Just trying out new restaurants is always nice,” he said. “Cleveland has a lot of different food spots that are really good.”

Peoples-Jones was the 27th receiver taken in his draft class after a disappointing three years at Michigan. He flashed the tremendous traits but never dominated like was expected from one of the nation’s top recruits. He called it a “blessing,” not pressure, to be such a big-time recruit and wouldn’t follow Tom Brady’s lead of obsessing over the sixth-round draft status.

“There’s a lot of different things that motivate me every day,” Peoples-Jones said. “I just try to use all of them. I’m just blessed to be here. Happy to be here. And I’m having a lot of fun.”

Despite pedestrian numbers — 14 catches, 304 yards, two touchdowns in 12 regular-season games — his rookie season filled the Browns with confidence. Pressed into service in Week 7 after Beckham’s anterior cruciate ligament tore, Peoples-Jones caught the first three passes of his NFL career, including the 24-yard winning touchdown with 11 seconds to play.

He started twice and played 25 percent of the offensive snaps for the year, and when called upon to make a big play, he usually delivered. He’s a student of the game, taking his successful study habits from the classroom to the film room.

“He came up big for us in moments last year,” Stefanski said. “A really smart player, a conscientious kid who we could put in there and trust him to do the job. He certainly earned our trust over the course of time.”

Peoples-Jones credited staying ready and being versatile. He wasn’t overwhelmed by the moments.

“I’ve always felt like I was meant to be in a situation,” he said.

“He’s a hard worker and he’s a special player,” running back Kareem Hunt said. “He’s definitely a bigger receiver and he can block. He can catch. He’s fast.”

Jadeveon Clowney has fun when he’s healthy, and he’s having blast in impressive start to camp
Greedy Williams learned he’s a fighter during lost season, ready to prove he’s better than ever