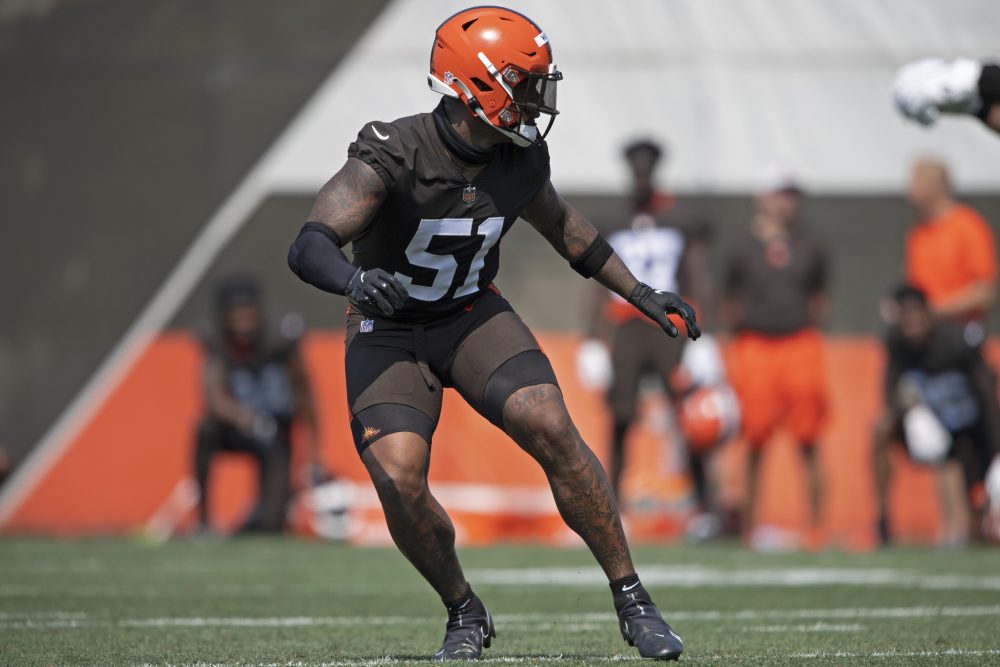 BEREA — Mack Wilson didn’t have an interception, a forced fumble, a fumble recovery or a sack last season in 13 regular-season games, including eight starts. His one tackle for loss matched the number of times he was a healthy scratch.

The linebacker missed the first two games after a knee hyperextended in training camp, never felt healthy and agonized over the missed opportunities to make plays. He revealed Friday he became so frustrated he contemplated retirement.

“Yeah, that is how down I was,” Wilson said. “Mentally, we go through a lot as football players. When I got hurt, it was one of my worst moments in my life. Just coming back, I never felt like I was myself.

“I did not feel like I was producing on the field, I could not move like I wanted to. I was missing plays that I knew I should make. I was in a dark place. I was able to climb back because that is what true fighters do.”


Wilson’s life changed in the midst of the darkness. He found out he was going to be a father for the first time.

That’s when his mindset changed.

“Finding out that I had a son on the way, it really motivated me to work extremely hard this offseason. That is what I did,” he said.

The baby, Mack II, arrived Wednesday. Dad called it “the best day of my life” while proudly posting pictures on social media. He knows he’s responsible for more than himself and determined to succeed.

Wilson, a fifth-round pick out of Alabama in 2019, is off to a solid start in training camp, including a highlight-reel interception of Baker Mayfield in the end zone Tuesday.

“I felt like my old self,” said Wilson, who totaled 39 tackles and two passes defensed last year. “I told myself before we came back to practice that I’m going back to my college mindset, to where I just felt free and I just felt like every time I went on the field I was the baddest person out there.

“Have fun and do whatever it takes to help us win.”

Wilson had started five straight games and seven of eight when the coaches decided to make him a healthy inactive in Week 15 against the Giants. He played the last two games and started the finale.

The coaches have noted Wilson is in better shape physically and in a better place mentally. He said he lost 6 or 7 pounds, gained muscle and is maintain around 237.

“I just worked hard. Just knowing that I have a son that’s going to be dependent on me, that’s what drove me,” he said. “I was in the gym every day, sometimes twice a day, and just my drive is different. My life changed after I found out. That’s how everything happened.”

The coaches challenged everyone to come back for camp in their best shape so they could worry only about playing.

“Mack is more flexible and more bendable,” linebackers coach Jason Tarver said. “He is running really well. He is finishing to the ball well, which is our No. 1 thing for linebackers. He is in much better shape. Proud of the work he has done and excited to see where he is going.”

Wilson made a point to connect with middle linebacker Anthony Walker Jr. during the offseason, and they worked out at T3 Performance in Avon. It was another step in his maturation process.

Wilson was forced into duty as a rookie, starting 14 games and collecting 82 tackles, four for loss, an interception, seven passes defensed, a forced fumble and a sack. After the Year 2 disappointment, the Browns beefed up the linebacker room, signing Walker in free agency and drafting Jeremiah Owusu-Koramoah in the second round and Tony Fields II in the fifth round. Owusu-Koramoah was picked to take Wilson’s spot on the weak side, but Wilson is doing his best to delay that.

“This game is competitive in general and I feel like that’s what the front office acknowledged and it did a great job with putting guys together that’s going to compete and bring the best out of each other,” he said. “And that’s what we’ve been doing so far.”

Conversations with his parents, godfather and girlfriend helped Wilson through the difficult times last year, but he said it would be wrong to classify it as depression.

Donovan Peoples-Jones earned trust of coaches as rookie, then made “long list” of improvements before Year 2

“But I think it points out that everybody is dealing with things in the course of the season,” Stefanski said. “We go through adversity as a team, and sometimes you go through personal adversity. Really pleased with where Mack is right now physically and mentally.”

Wilson started to come around right when last season was ending. He found out about the pregnancy before the divisional round of the playoffs, then played his best game of the year in the loss to the Chiefs, according to Tarver.

“He really flashed, and that was a taste for him to say I want to do this all the time,” Tarver said. “What’s great about some of the things that happened is, with Mack, with Jacob Phillips, they had never really been hurt before and that’s part of this business. Nobody’s 100 percent.

“You’ve got to learn how to play with that, and I think Mack dealt with a lot of things and so far he’s really made the right choices to put himself in the position to really become a pro and a productive pro.”