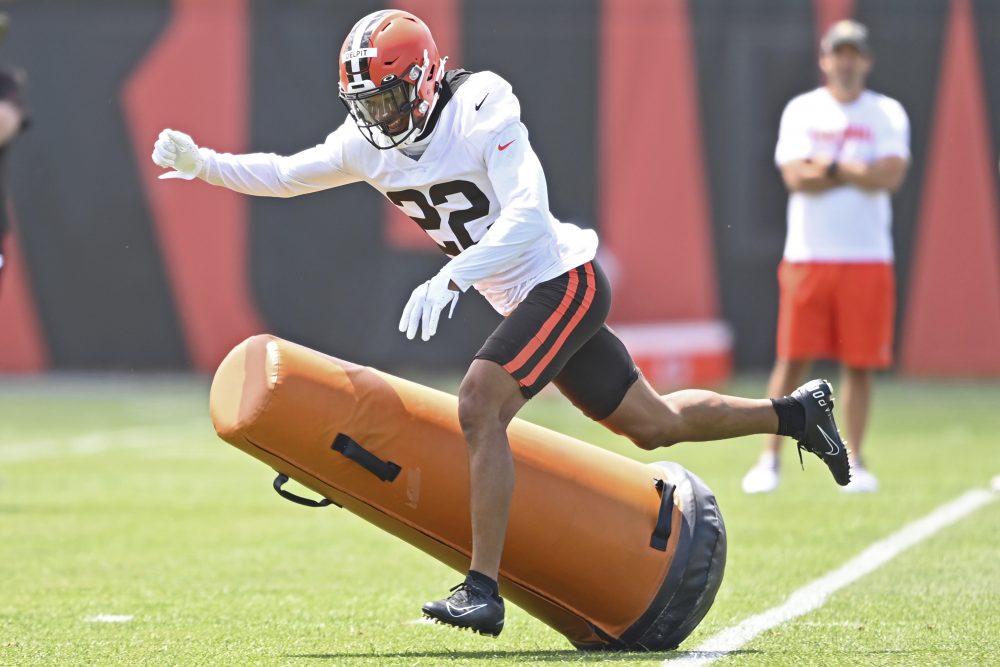 Q: Any serious concerns about the players who have missed numerous practice sessions? Also, how is Curtis Weaver looking?

A: The Browns are undoubtedly being cautious. They see the big picture of a 17-game regular season and a hopeful three- or four-game playoff run. That doesn’t remove the significance of training camp practices, especially for the inexperienced.

I would stop short of saying “serious,” because the season is still a month away, but my concerns start with safety Grant Delpit. He missed all of his rookie season a year ago with a ruptured Achilles tendon, so the Browns were taking it slow with him at the start of camp. Unfortunately, a hamstring injury has kept him sidelined for more than a week. He’s being counted on as a key piece of the secondary but has never played in an NFL game and needs reps. The clock is ticking for him to be ready by Week 1.

Rookie receiver Anthony Schwartz missed much of the offseason program and now training camp with a hamstring injury. The Browns drafted him in the third round because he has special speed and they wanted to add that dynamic to the offense. Coach Kevin Stefanski has praised his intelligence, but most rookies need time on the field to be trusted once the season starts.

As for Weaver, he hasn’t jumped out to me. He’s in the competition for the last defensive end spot but seems to be on the outside looking in heading into preseason games. With Myles Garrett, Jadeveon Clowney and McKinley not practicing Tuesday, Porter Gustin and Cameron Malveaux worked with the starters, while Weaver and Joe Jackson were with the second team. I need to see more burst and penetration from Weaver.

Q:
Will it be enough of an improvement from Mack Wilson to make this roster? If so, who goes?

A: Wilson has been a fixture with the first-team defense and continues to make plays, including a nice breakup of a deep pass for tight end Austin Hooper on Tuesday. I thought Wilson was squarely on the bubble when camp opened but would now put his odds of making the roster above 90 percent. Of course, there’s plenty of time and three preseason games for that to change — and a team could make a trade offer the Browns couldn’t refuse — but Wilson has enough talent and versatility to help the roster, even if rookie Jeremiah Owusu-Koramoah passes him on the depth chart.

Anthony Walker Jr., Owusu-Koramoah and Jacob Phillips are locks to make the team. Wilson and Sione Takitaki are likely, and Malcolm Smith and Elijah Lee could be battling for the last spot at linebacker. The foot injury to rookie fifth-rounder Tony Fields II has kept him off the field for all of camp and makes him a candidate for injured reserve, freeing a roster spot.

Q: Everyone will be talking Baker’s contract until it gets done. It feels like the national media is split on Baker’s ability. My question is what does Paul DePodesta and his analytics army think of Baker? He was here when they drafted him. Was he in favor of that pick, or did Horrible Hue actually force their hand? With the Haslams giving DePodesta 5 more years, he has to have influence on this decision.

A: A lot to unpack here.

Former general manager John Dorsey drove the decision to draft Baker Mayfield with the No. 1 pick in 2018, and Dorsey didn’t fully trust or respect the analytics side of the organization that is led by DePodesta. That doesn’t mean DePodesta didn’t favor Mayfield. Analytics tend to place a lot of value on accuracy — remember Cody Kessler? — so it would make sense that Mayfield’s outstanding completion percentage at Oklahoma (68.5) was attractive to DePodesta.

Regardless of how DePodesta felt three years ago, I think he and the entire organization are believers in Mayfield and it’s only a matter of time before a contract extension gets done.

And when it comes to DePodesta’s influence on this and all big decisions, it can’t be overstated. He’s outlasted GMs and coaches, signed an extension last year, sits at the top of the organizational chart and is probably the smartest person on it. His opinion carries immense weight.

Q: Coach Stefanski avoided detailing whatever issue Takk McKinley is dealing with by stating “I can’t really get too far into it,” which leaves little doubt something significant has gone haywire. Are we already at the point where we can conclude the tough, smart, accountable formula is worth following 100 percent of the time?

A: I’ve only been told McKinley’s issue is private and personal and he’ll be back when it’s resolved. But I agree that Stefanski not being able to guarantee a return before the opener suggests a serious issue. However, I’m not sure it’s fair to assume a personal issue means McKinley doesn’t fit the organization’s desired characteristics.

Even removing McKinley from the discussion, I don’t know if it’s practical to assume all 53 guys on the roster are going to fit the smart, tough, accountable model. I think general manager Andrew Berry knows some risk is required and it’s OK to take a chance on a guy who isn’t a core player. We saw this with defensive tackle Malik McDowell, who has a history of off-field problems.

Q: I think back to Ozzie Newsome, and during his on-field career you could see the attributes that made him a great executive. He was hardworking, consistent and always getting better. Are there any current Brownies you could envision having success as an NFL coach or exec after their playing days are over?

A: I’m feeling generous — and putting off going for a run — so you get two questions.

The backup quarterback is often the smartest guy on the team, so I could see Case Keenum coaching or working in a front office. I’ve been impressed every time I’ve talked to him.

Walker seems like a coach in training. His dad’s a coach, and when Walker was with the Colts he would do personal film study and hand out the notes before the coaches would.

Center JC Tretter, who doubles as the NFLPA president, could do whatever he wants in the game, but his interests might be too broad to commit to a life in the trenches.

Receiver Jarvis Landry is the other player who’s intriguing. He loves the game, works incredibly hard and gives great motivational speeches. The only question is if he would want to continue the grind when he’s done playing.